Share All sharing options for: Nova to face Purdue in 2K Classic 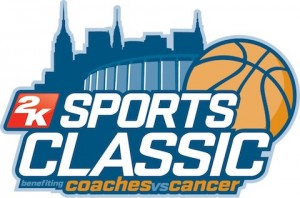 ESPN announced the semi-final match-ups for this Fall's 2K Sports Classic at Madison Square Garden and Villanova will face the Big Ten's Purdue Boilermakers on Thursday, November 15th at 9:30 PM in a game that will be broadcast live on ESPN2. The proceeds of the event will go toward the Wounded Warrior Project.

It will be the second game of a double-header, with Alabama playing Oregon State in the early game at 7:00pm. The winners of those two games will advance to the final on Friday (November 16), which will also air on on ESPN2 at 7:00pm. The semifinal losers will play for third place in the consolation game at 5:00 p.m. (broadcast on ESPNU).

The four schools that will appear at Madison Square Garden have combined for 93 NCAA tournament appearances. Almost a full third of those appearances are from Villanova, however.

Villanova has played all three potential opponents previously. The 'Cats defeated Purdue 67-50 in their only prior meeting in 1995, which was on a neutral court in California. They have played Oregon State three times, winning one, while they have split their two meetings with the Crimson Tide.

Matchup I can't wait to see: Purdue vs. Villanova. Mostly because I’m curious what the Wildcats will be like this season. Nova was a colossal train wreck in 2011-12, false starting with a 4-0 opening against lackluster opponents before sliding into oblivion. Maybe the Cats will be better this season, fueled by players who want to be in college as opposed to those who are looking for greener pastures.

O'Neil was the only one of the four ESPN "experts" who didn't pick Villanova to advance to the final of the 2K Sports Classic. Of the four other analysts whose pick was on the record (Eamonn Brennan, Andy Katz, Jason King and Myron Medcalf), only Jason King didn't pick Villanova to win the tournament -- he had the 'Cats losing to Alabama in the final.

Purdue adds another strong BCS-conference opponent to the Wildcats' slate in 2012-13. They will also make a trip to Nashville to take on Vanderbilt in the Big East/SEC Challenge.

Tickets for 2K Sports Classic Championship Round games at Madison Square Garden are on sale now through the MSG box office. Earlier round games are hosted at campus sites and will be announced at a later date.