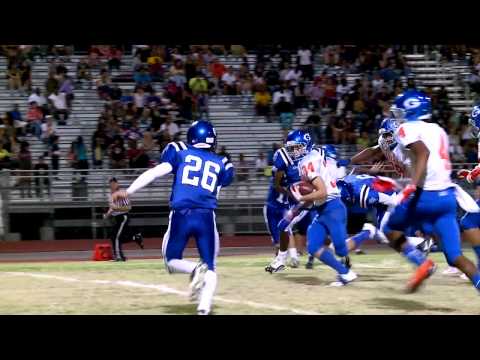 Less than a month after opening the 2013 account with the commitment from a Boston-area wide receiver, Villanova football has added another football commitment in Las Vegas' Lorenzo Fertitta, Jr. He attended a football camp in June where he impressed coaches and earned a scholarship offer.

At 5-9 and 165-pounds, he plays running back, defensive back and was a kick returner for Bishop Gorman high school. Last fall he rushed for 293 yards and two touchdowns on 52 attempts and caught nine passes for 126 yards. He will be a regular on defense this fall. Rivals.com classifies him as an "all-purpose back," at the college level.

"I had a chance to talk with my family and we knew Villanova would be the better choice," he told the Las Vegas Sun. "Going to the East Coast sounded very interesting. I really liked the campus. It had that old look and everything."

While he lacks size, he has the necessary speed and shiftiness to succeed at the next level. If there isn't a need for him immediately on the team, a redshirt year will allow him to add some bulk to his frame.

Prior to visiting Villanova, Fertitta was leaning toward a commitment to Pioneer League member, San Diego (not to be confused with Big East-bound San Diego State). He was also being recruited by Cornell, Dartmouth, and Holy Cross. UNLV may have also expressed interest, but had not offered.

This fall will be the last season of the 4-year Mayors Cup series against Temple football for the Wildcats. In 2013, Villanova will open the season by travelling to Heinz Field to take on the Pittsburgh Panthers in their inaugural season in the ACC.

According to head coach Andy Talley, the 'Cats will take on the Syracuse Orange in 2014 and the Connecticut Huskies in 2015. When asked if the Big East's in-and-out movement will affect the scheduling of those games, he couldn't say whether things could change -- noting that Auburn had backed out of a game with Villanova in 2006 -- but that his program had no intention of altering those arrangements.

2013 will be the third meeting between Villanova and Pittsburgh with both prior meetings being losses. Their most recent tilt was in 1998, a game that Pitt won 48-41 while being given a very tough game from future Eagles star Brian Westbrook. It will be the fourth meeting between Nova and Syracuse in 2014, with 'Cuse leading that series 2-1 and the last game being an Orange victory in 1975.

Villanova football has the most history with former Yankee Conference foe, Connecticut, however. The Wildcats lead UConn all-time 7-4, with their first meeting in 1987 and most recently in 1999 (a 48-45 Wildcat victory). The two programs have not met on the gridiron since the Huskies moved to the Big East conference.