Villanova football to play Stony Brook in playoffs first round

The Wildcats will play the first round of the NCAA Division I football playoffs at future CAA conference member Stony Brook next Saturday.

Share All sharing options for: Villanova football to play Stony Brook in playoffs first round

With the bracket being revealed this afternoon, the Wildcats discovered that they were slated to play a powerful Stony Brook Seawolves team in the opening round of the playoffs on Saturday. The 'Cats will travel to the Long Island-based school for the game. The winner of that game will travel to play at the number-3 seeded Montana State, on December 1st.

The bracket features three CAA football members, including Old Dominion who were one of the five seeded teams in the 20-school bracket, as well as New Hampshire, who will play Wofford on December first. There were a few CAA members who likely felt like they were snubbed in the selection process, with Richmond, Towson and JMU among the bubble teams left out of the picture.

10-game winner Lehigh, out of the Patriot League might have been the biggest snub of the draw, showing that the committee's respect for that conference may not have improved from previous years.

Villanova was among six former FCS champions that are in the bracket, including, North Dakota State (the most recent champion), Eastern Washington, Appalachian State, Georgia Southern and Montana State. The last three consecutive National Champions are all included.

The Stony Brook game will kick off on Saturday afternoon at 3:00pm and will air on ESPN3.com. 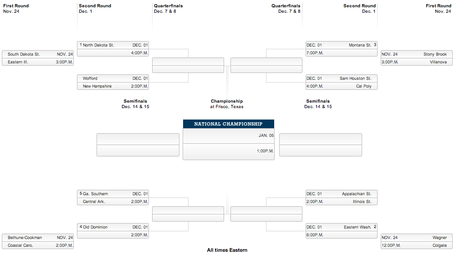