Villanova has agreed to become part of a new conference with the six other Catholic schools from the Big East conference (a league that may wind up being called the Big East). This partnership will break these schools away from the hybrid-model league that had a number of members who played football in the Bowl Subdivision after the membership on that side of the league changed dramatically in the past 15 months.

The financial opportunity that the old Big East model offered was tremendous for these Catholic schools. Villanova's athletic director, Vince Nicastro, claims that the financial future for the program will remain as strong, despite the uncertainty of the situation.

The AD described any discussion of potential Television models as "premature," which makes sense as the conference will be bigger than the seven schools that have officially signed on for the move. It is difficult to start estimating a broadcast contract value for a conference whose membership is unknown — a large part of the reason that the Big East conference these schools are leaving hasn't locked down a deal just yet.

That said, "all indicators are really positive," for the new league according to Nicastro. 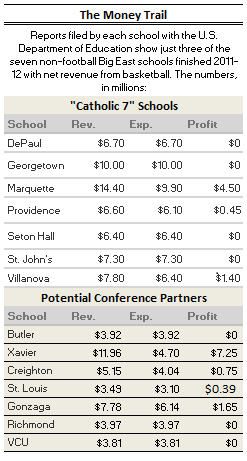 As for Villanova's own earning potential, which we attempted to provide insights on recently, Nicastro points out that Villanova's figures reported to the Department of Education do not include the " fairly sizeable 'unallocated' revenue" that the school has generated recently -- but that could probably be attributed to men's basketball.

That is one of the inherent issues with using Department of Education data. There are variations in reporting from school to school, including how those schools allocate revenue sources.

Nicastro also noted that revenue can be either "earned" revenue or "university subsidy" revenue, that isn't distinguished by schools when reporting their athletics balance sheet to the Department of Education. Programs that show a profit likely aren't receiving any notable university subsidies (but even that might depend on a school's accounting methods).

It's almost impossible to know what policies schools are applying when reporting.

Marquette and Xavier were used as examples in our previous piece on the financial impact of the C7 move, and both programs are clearly very good at generating the "earned" income that comes from somewhere other than the University coffers.

"Marquette and Xavier do a great job with their programs and do generate a great deal of 'earned revenue,'" Nicastro wrote in an email, "and it shows in their resource allocations to their respective programs."

For Villanova, generating more earned revenue in the future from sources other than the television conference will be something that the athletics department will be hoping to accomplish.

"We will certainly be examining a number of our strategies as we move toward this new model," he explained. The schools' use of the Wells Fargo Center, the non-conference scheduling plan and other aspects of program operations will be reviewed as the process of forming a new league with the "Catholic 7."

Nicastro claims that all indicators so far have been positive for the program but a lot of questions remain about the Wildcats' future conference.

Some of those questions won't be answered until after the league's roster has been settled, and the league will need to add programs that will build a competitive and compelling top to the league. A recent analysis by ESPN's Joe Lunardi shows that the bottom four programs in the Catholic 7 group over the past 12 years is likely insufficient to form a powerful conference that will help schools like Villanova, Marquette and Georgetown to maintain their status. His recommendation was for the league to look at 12- or 14-team models, adding "upper-end" programs to the conference that will bolster both the number of tournament bids and projected seeding for the conference. As it stands the seven schools on their own would not be strong enough without a significant injection of high-RPI programs.