Share All sharing options for: No PPL Park game in Fall 2012 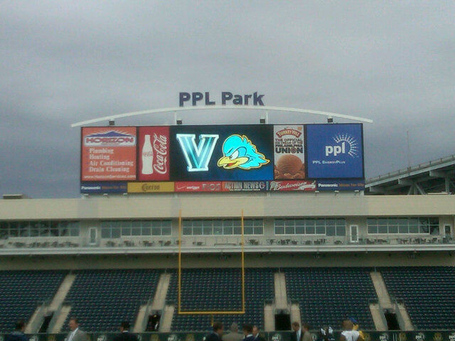 Last season, Villanova worked out a deal to move the season-ending rivalry game with Delaware to the brand-new confines of PPL Park. That move opened the door for large-scale tailgating, revelry and something resembling a real college football atmosphere for the first time in decades at Villanova. Fans were excited for the possibilities of more games at the MLS venue, but they will have to wait another year, it seems.

According to Villanova football head coach Andy Talley -- a major proponent of using the Chester, PA stadium -- the Wildcats just couldn't make it work this season.

"Unfortunately we could not get it done there this year because of our schedule," he told VUhoops. "We just couldn't work it out. I pushed for it and wanted it to happen."

The problem, Talley said, was Villanova's schedule. There wasn't a game on the home slate that Nova officials could identify as one that would draw enough fans to make the stadium-switch feasible.

"One of the problems you have too is, if you are going to play that game with anyone on our schedule other than Delaware, you’ve probably got some attendance problems there because nobody in our league really brings a crowd except Delaware.

"We didn’t have a lot of options with playing that game there."

The news will come as a disappointment to some fans who enjoyed the PPL Park tailgates and gameday experience last November. Andy Talley was impressed with the experience and was hoping to offer it again to the fans and supporters of his program.

"The tailgate out front was super, the skyboxes were packed and the people who were in the skyboxes thought the venue was great, the food was great, the outdoors approach to being able to walk out of your box area," Talley noted. "Nothing but kudos.

"I loved the game down there, I loved everything about it. It was a neat venue to play in. Our kids played very well, we actually could've won that game there."

The only disappointment for the head coach was the crowd, which didn't include nearly as many students as he had hoped for, or even as strong of a Delaware contingent.

"I think Delaware, because of where they were [in last season's standings], didn't support the game and I thought the Villanova crowd was lukewarm - even though we did have a lot of people sign up to buy tickets -but in terms of actually being there," the coach explained.

"I think the people who did show up there had a fabulous time."

Talley is working with Villanova officials to make sure that fans who show up for Villanova football games always have a fabulous time. The athletics department has formed a committee to work on improving the game day atmosphere on Saturdays in the Fall.

"We’re working real hard on improving our gameday atmosphere at Villanova right now. I’m on a committee to work with that group."

That committee won't just be coaches and assistant athletic directors though. There are plans to include voices from the Football club and elsewhere to the discussion.

Some prominent Villanova football alumni are also going to be involved in the planning and discussion for the future of the program. Former Eagles running back Brian Westbrook and former Falcons receiver Brian Finneran have both committed to serve as advisors for Villanova football.

"[Finneran] came down to Chattanooga for the National Championship game and it was great to have him on the sideline," Talley said about his program's first Walter Payton Award winner. "He and Brian Westbrook just got involved with us and our Villanova football advisory club.