Plonski commits to Football 'Cats for '13

Share All sharing options for: Plonski commits to Football 'Cats for '13 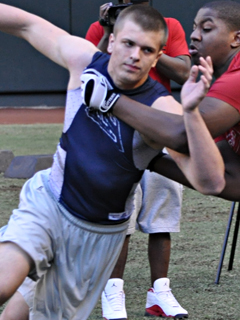 While Jay Wright and his staff are hoping to land an elite talent to open their 2013 recruiting class, Villanova football's recruiting machine is running strong. The 'Cats recently picked up a third recruit from a third-different state in Brooklyn Tech's Thomas Plonski, a 6-6, 230 pound defensive end. The 'Cats have built up a lot of strength on the defensive line in recent years, and it seems that the coaching staff is keeping the talent pipeline at that position flowing.

Plonski is rated 2-stars by both Rivals and Scout, but is rated 3-stars by 247 Sports. The latter service ranked him among the best prospects out of the Empire State. He runs the 40-yard dash in 4.8 seconds, according to Hudl.com and managed to record 52 tackles and eight sacks as a junior last fall.

The Engineers run a 4-3 defensive front, but scouts believe that Plonski can play end in a 3-man front like the one used by Villanova as well.

Villanova offered him the opportunity to play winning football and get a valuable college degree.

Continued after the jump...

"[T]he combination of playing at a top FCS school while getting a great educaion was too much to pass up on," he explained. "The coaching staff is great and the location of the school is perfect for my family and myself."

He chose Villanova over offers from JMU, Old Dominion, Buffalo, Fordham and Wagner. A list that included one bowl subdivision school in Buffalo of the MAC, as well as another that will begin a transition to the FBS Conference USA next season in ODU. Playing in the MAC or CUSA were not major selling points for the high school senior, however.

"I'm not afraid of competition on any level but I just feel that a championship, even on the FCS level, will be more notable to not only me but also fans, the school and the general public overall as opposed to a non major bowl game."

With that, the Wildcats have filled at least three spots in the 2013 class with talented and motivated young men. There will be 16 seniors on the 2012 Villanova football team, however, so there are a few more spots to fill for the program.

The other members of the 2013 Football Recruiting Class are: