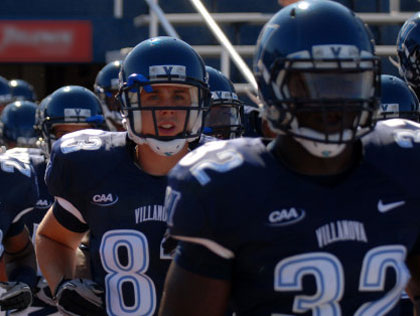 Villanova football will look to put it's worst season of the Andy Talley era in the past this fall. Though they were picked to finish near the bottom of the CAA in the league's preseason poll, the head coach told VUhoops that he was not concerned about the projections.

"For us, its certainly an opportunity to come in under the radar. People may not be looking for us early on. So I think we’re going to have to go out and prove ourselves early and see if we can get back on the winning track as soon as we possibly can."

The CAA remains the toughest conference in FCS football this season, so the program faces an uphill climb. According to Talley, only four seniors are expected to start this season, so the team will be young, but the talent will be there. If a year of experience and some coaching can pull things together for the young players, things could be on an up-swing.

The Wildcats return 10 starters on defense and 11 veterans on offense this season, a stark contrast to the 2011 campaign, where there was often more freshman on the field than juniors and seniors combined. The most important returning player, however, may be future NFL draft-pick and star receiver Norman White.

"I think what we missed with Norm [White] was a big-play guy, we didn’t really have a big-play guy," Talley noted. "We opted for Dorian Wells as the next-guy-in and Dorian didn’t have a very good season and he has a lot to prove this year as a fifth-year kid. Then we started to find Jamal [Abdur-]Rahman, and then now you’re starting to get your big-play player.

White was the number-one receiver on the field in any situation prior to his injury, whether a first-and-10 or a third-down in the red-zone. This season will be no different, with the 'Cats leaning on white to catch key passes in any situation.

Having White around will help sophomore quarterback Chris Polony to make plays in Villanova's spread offense, but he will miss out on Jamal Abdur-Rahman, who started as a freshman last year in the slot. Last season's offensive star handled kickoffs, grabbed passes and ran the ball out of the backfield, leading the team in all-purpose yardage in 2012. This season, he will serve a suspension for a non-football-related offense that occurred in the off-season.

In his place, fifth-year senior Dorian Wells will try to hold things down in the slot.

"We’re going to put Dorian in the slot," the head coach said. "I think Dorian can hold that down."

If Wells cannot hold the job down, however, the 'Cats have been blessed with some depth of receivers who are capable of playing in the slot.

UPDATED 8/14 - Dorian Wells will be out for at least 8 weeks with a broken foot. He should return after that point since he will not have eligibility next season. The battle for time in the slot will be a three-way one between the following candidates:

"[W]e have a kid named Poppy Livers that we like. Poppy was a great practice player as a freshman and when we put him in the games last year he didn’t do well. We have Kevin Gulyas, who we got real late from Allentown Catholic and I think he can be great, but I need to see him playing college football. He had a great debut in the Big 33 game and he fits that slot position as well.

"The other guy we may mess with a little bit -- but again I need to see him playing college football -- is Aaron Wells, one of the incoming freshman running backs, because he has really good hands."

Still, the team will miss Abdur-Rahman this season, as he would have provided a second legitimate big-play threat for the passing and running games.

"The loss of Jamal hurts because [he] was your second go-to guy and a big big-play guy along with Norman White. We could take him and shuffle him into the backfield like we did against Delaware, and you know he ripped two off against them."

Joe Price is likely to start on the opposite flank from White this fall, with former-quarterback Dustin Thomas and Kenny Miles also vying for playing time out wide. Miles had a huge spring, and will provide the team with important depth and flexibility for the team at that position.

Earnest Pettway offers Polony an athletic tight end with good hands to throw to, especially in short-yardage and redzone scenarios. The coaching staff is very high on the California sophomore's potential and he will likely to continue his development this season as the starting tight end.

Austin Medley and Kevin Monangai, both sophomores, will offer Polony some help in the running game as well.

"They’ve had their little maiden voyages, now they need to become effective, quality running backs in the league," the head coach noted. "Last year we saw a little of it from Austin Medley -- he broke a couple of runs, he’s bigger, faster... Kevin Monangai was kind of -- as a freshman -- all over the place. He hit the hole, bounce it outside and wasn’t always in the seam that he needed to be in. Now, I think he’s less helter-skelter and more, 205-pounds, looking a little more like Aaron Ball.

"[N]ow if you have two guys that you can count on to fit in that weaponry that you have, now Polony has help besides Norm White and some of the other guys."

The offensive line will be bigger than it was last season, with Vince Kowalski, who became the starter last season at right tackle, going from 265 pounds to nearly 300 since season's end. Kyle Wallace will start at guard and also gained significant mass from last season, as did left tackle Bill Vogel.

Where the Wildcats will lose something on the offensive line is at Center, where Ross Hall, another big body, will take over for an injured All-CAA pick, Dan Shirey. The three-year starter and team captain is still recovering from surgery for a blown achilles tendon and could be back by the Rhode Island game on September 15th, but according to Talley, serious consideration is being given to the idea of redshirting the offensive lineman this fall.

"We’re in pretty good shape with that group [of linemen]," noted Talley. "Without Shirey, then we have to groom a freshman. One of those four incoming freshmen will have to be the swing guy [backing up multiple spots] and I just don’t know who it will be. They’re all rangey guys, but nobody is more than 265."

All of those assets will help the Wildcats as they search for a consistent presence at quarterback. Chris Polony is "the guy" heading into the season, but redshirt-freshman John Robertson will likely see some action in a "wildcat" package as well. The 'Cats did not practice much of that scheme in the spring as they prepared Robertson for duty as the backup quarterback (and apparently his passing has improved a lot), but he is a talented enough runner that fans can expect him to take a few snaps.

"John is obviously a runner first and a passer second," he stated. "When you get those kind of guys you’re constantly trying to calm them down and get them in the mode of where the pass has to go and are you going to go through your reads or take off and use your legs; or when you use your legs are you going to be able to throw on the run and find a receiver."

Dustin Thomas, now playing wide receiver, will be available as the third string quarterback in an emergency as well.

As for Polony, the head coach believes that last season will be a building block for a quarterback who he claims has, "as good an arm as any quarterback that we've had here."

"I think the fact that he [Polony] was able to get some valuable experience as a freshman, and that’s real difficult to do, for a freshman quarterback to come in and try to grasp a system like we have, especially with so many young people around him. So he was really a baptism under fire, but you know, in the long run if his confidence level wasn’t shot up, then you’ve got a guy that’s going to learn from what happened."

Please also check out our preview on the DEFENSIVE side of the team.