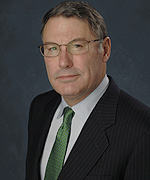 CBS Sports vice president Mike Aresco will be moving north from Blackrock to Providence if reports leaking out this morning are correct. The Big East conference presidents held a conference call this morning to discuss and vote on the candidates to replace John Marinatto as Big East commissioner, and Aresco was unanimously anointed as the successor.

He will assume the commissioner's duties in September, according to the conference's press release.

The conference wanted to hire a "non-traditional" commissioner -- someone from outside of the college athletics departments or conference offices. Having a chief with a non-traditional background was considered a boon to the Pac-12 as they landed one of the best television deals in the country last year, and the Big East is hoping to replicate that success.

With television negotiations taking the pole position on the conference agenda this fall, it was important to put a media savvy face on the troubled conference. Former Boston Globe columnist Mark Blaudschun broke the story this morning on his blog, ajerseyguy.com.

"The search to identify the new Commissioner of The BIG EAST Conference was truly an international search," said Greg Williams, University of Cincinnati President and Chair of the Commissioner Search Committee. "We had many outstanding candidates, but we are fortunate to have Mike Aresco as our new Commissioner. His breadth of experience and depth of knowledge in intercollegiate athletics will continue to move the BIG EAST forward on a successful path. The BIG EAST has enjoyed a great history. Mike Aresco will help assure the conference of a vibrant future."

CBS has had one of the strongest college sports operations on television for a while, though they have been rivaled by ESPN in that department. Aresco helped to build that operation and in the process gained tremendous experience negotiating and structuring deals.

“The Presidents have acted very responsibly,” said Interim Commissioner Joe Bailey. “They have appointed a leader with integrity, intelligence and energy. Bravo!”

Aresco was responsible for all college sports programming at CBS, notably, he worked on CBS's football contract with the SEC and has been part of the network's negotiating team that has acquired rights to the NCAA basketball tournament as well. That NCAA tournament deal could be a further sign that the Big East plans to sign on with more than one television network once their negotiating window opens, as CBS teamed up with Turner in order to share the coverage for the tournament in the most-recent deal.

He also spent some time working for ESPN, where he was responsible content acquisition, scheduling and development of long-term strategies for college sports. He also served as an assistant general counsel for the worldwide leader.

He has an undergraduate degree from Tufts University and a law degree from Big East member, Connecticut.

Yesterday's announcement that the conference had hired Chris Bevilacqua's firm to help lead the television negotiations was another sign. He also worked on the Pac-12's multi-partner television deal with ESPN and Fox Sports, and is considered to be very knowledgeable on the workings of these contracts.

It is believed that the conference might be able to maximize the value of their TV rights and the amount of exposure they get by splitting their soon-to-be-massive inventory into smaller segments and selling them to different bidders.

In an era when marketing and television rights rule the college sports universe, hiring a college sports television executive seems like a wise move. According to CBS' Dennis Dodd, former Big 12 interim commissioner Chuck Neinas commented on the move that the Big East, "outkicked their coverage."