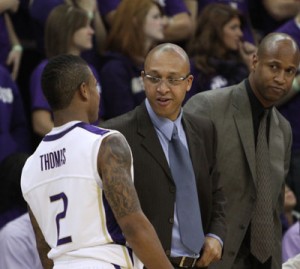 According to CBS' Jeff Goodman, in the wake of the Doug Martin incident, Jay Wright is now looking toward Washington assistant Raphael Chillious to fill his open assistant coaching spot. "Coach Chill" as he has been referred to in the Pacific Northwest, was a former point guard and a native of the northeast, who was pulled into the college ranks from a post as the head coach at the prestigious South Kent School in Connecticut.

He has coached in both the prep school ranks at South Kent and Nottingham Academy, as well as in college at the University of British Columbia (Canada) and the University of Washington, with a stop at Nike in 2008, where he headed the Elite Youth Basketball AAU division for the sneaker giant. Nike EYBL remains one of the most important summer recruiting circuits and working for Nike on it likely leaves him with a tremendous rolodex of elite AAU program coaches (as long as their teams wear Nike).

He isn't without scandal, however, being penalized by the NCAA in 2011 for speaking publicly about an unsigned recruit -- a definite college basketball no-no. That only amounted to a secondary violation for the coach, but the reporter who penned the story that got Coach Chill in trouble has described him as "conscientious", "rule-abiding" and "morally sound".

"Raphael seems to be, from what I saw, walking the talk," Schoenfeld told Sports Press NW. "And as a result I think the program is immeasurably better off. They're not going to have problems in the future. If a guy like that gets a violation... I just throw up my hands. It's just stupid."

Chillious has a reputation for coaching NBA talent. In five years at South Kent, he sent three players directly to the NBA; Josh Boone, Dorrell Wright, and Andray Blatche. At Washington, he has coached Isaiah Thomas (who also played for him at South Kent), Quincy Pondexter, Terrence Ross and Tony Wroten.

"Every conversation you have is a recruiting opportunity," Chillious told a Lafayette alumni publication. "I was born to recruit, whether it's sports, college basketball, even if a company hires me or a school wants me to be a fund-raiser. I am a recruiter."

"You have to always be authentic, and the best way to do that is to always tell the truth. A lot of coaches are scared to tell players the truth because they're afraid they're going to lose the player. I've always felt that if you tell the player the truth about themselves and their game, and they decide not to come to you because of that, you didn't want that guy in your program anyway."

His academic credentials are also verified, graduating from Lafayette College in 1996, reportedly with a 3.4 GPA.