Football gets a basketball-esque update

Share All sharing options for: Football gets a basketball-esque update

Fast approaching the Labor Day kickoff of college football season, now is around the time that teams make changes to their uniforms. Sometimes the changes are subtle ones, like Penn State putting names on their jerseys, while other changes are more drastic, like the alternate uniforms unveiled by Notre Dame. Villanova won't be immune to a little bit of football uniform tweaking itself, it seems.

The Wildcats are getting (at least) some updated new cleats, courtesy of Nike. 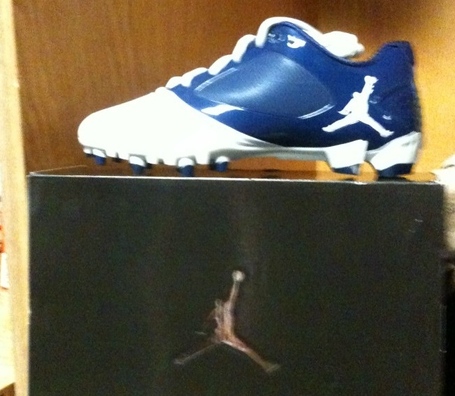 More after the jump...

The interesting thing about the footwear is that it bears the Jordan Brand logo -- primarily a basketball brand that grew out of Nike's sponsorship of NBA legend, Michael Jordan. Nike previously issued some Jordan Brand football gear to the players at North Carolina, and apparently the Jordan Brand move into football will now spread to the Main Line.

Villanova football will reportedly take the field against Temple wearing the cleats pictured above. It isn't clear if these will become the program's primary footwear after the game or not.

The Jordan Brand also produces baseball cleats, sandals and other footwear for both casual and athletics uses.