Share All sharing options for: Villanova wants freshmen to rush the field 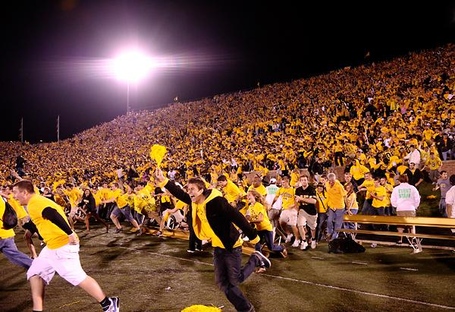 It's a new tradition! According to Villanova, anyway. Freshmen are being asked to come out to a pep rally at the Pavilion prior to the first home football game against Fordham. After the rally, those freshman will be able to head over to Villanova stadium, where they will be asked to rush the field -- before the game -- running across the field to the new student section along the north sidelines.

Instead of being seated in one small section in the corner of the south sideline, by the endzone, the student section will now be the first 12 rows of the three sections in the middle of the opposite sideline.

Will students participate in this new tradition? The Athletics department is hoping that promotions like this will get the incoming classes interested in attending Villanova football games. They're hoping that the field-rushing exercise will bring some freshmen into the game and a (hopefully) dominating victory over Fordham will keep them on board.

'Nova isn't taking any chances though. Any Freshman who registers to take part in the "Freshman Run" by August 28th at 5:00pm will have a chance to win a custom Villanova football jersey -- with their last name sewn on the back. So if the chance to run across the field wasn't appealing to the freshmen, perhaps some free Villanova gear will get it done.