Updated (11:50am 8/26) - Edgar Walker of MDhoops.net is now reporting that Jenkins has actually committed to Villanova. The commitment was given verbally this morning, so it seems that the denials from earlier were correct, in that the formalities had yet to be completed. Edgar is also a basketball analyst for MD High on the Rivals network.

Updated (8:57pm) - Looks like this may have been a false-alarm, guys. Though 247Sports reported a commitment, Adam Zagoria later wrote that Gonzaga head coach Steve Turner told him that Jenkins had not yet committed to Villanova. That said, things might be leaning that way, with Ermann supplementing his report with a tweet saying that the commitment will be made official next week, so we will keep an eye on this one.

Updated (9:57pm) - A staff writer for the Washington Post spoke to Jenkins, who claimed that he had neither committed to Villanova, nor was he close to making a decision at this point. Villanova is still in the picture for this kid, but it doesn't look like he is ready to make any pronouncements right now. 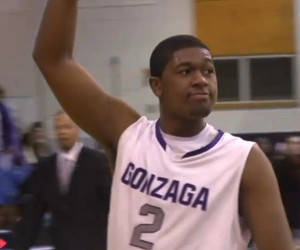 It has been a long wait for Villanova to open it's 2013 recruiting account for men's basketball, but the wait appears to be over. Kris Jenkins, a 4-star forward from Maryland, has given the Wildcats his verbal commitment, according to Jeff Ermann of 247Sports. Former assistant coach Keith Urgo, who left the team to join Coach Pat Chambers at Penn State, was the initial recruiting contact for Jenkins, but the program kept in touch after Urgo left.

The 6-6, 235-pound forward was also considering Clemson, Rutgers, Xavier and Miami. He ranks 70th in the ESPN 100 recruit ratings for his class and 17th among power forwards.

Most recruiting experts consider him best as a power forward, where he is undersized, but he has some strong post moves and enough bulk to hold his own. There is no fear of contact for Jenkins, who is also a strong rebounder. He would have to develop his perimeter shot and handle to play a similar role to JayVaughn Pinkston, but that may not be out of the question.

He had a big season in 2011-12 and added interest from a number of big-time programs, but his list came down to the previously-mentioned five schools. He showed an ability to play good defense down low and was highly productive offensively and on the glass.

As a junior, he averaged 19.8 points, 10.6 rebounds, 4.0 assists, 3.9 steals and 1.2 blocks per game, while leading his team to a 27-7 record and a run to the Washington Catholic Athletic Conference title game. He was also the WCAC Player of the Year and a two-time First Team All-WCAC selection, among numerous other accolades that he has been bestowed with.

In March, he was named the 2011-12 Gatorade District of Columbia Boys Basketball Player of the Year, which recognizes both his athletic and academic achievements, labeling him the best high school player in D.C. (where he suits up for Gonzaga). He maintained a B average in the classroom and volunteered as a youth basketball instructor as well as at a homeless shelter.

According to Marty Keithline, a coach from a rival school:

"He is a dual-threat player who can efficiently score in the paint as well as step out and hit the 3-point shot. Jenkins must be kept off of the offensive glass, as he works for position well and has a knack for getting his hands on offensive boards."

He does not have a preference for what position he will play in college, and Jay Wright will be able to deploy him wherever he thinks Jenkins offers the most upside.