Share All sharing options for: Nova receiver depth in question 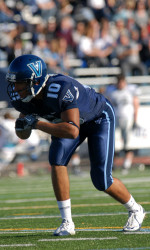 Villanova football has lost a second receiver to a foot injury, Andy Talley said this morning on the CAA football conference call. Kenny Miles, a senior, was expected to be in the mix for the Wildcats to play opposite Norm White, but instead has suffered a Jones fracture that will keep him out of the game for about eight weeks. He joins fifth-year senior Dorian Wells on the sideline with a foot injury picked up during training camp and leaves the 'Cats slightly more short-handed at receiver.

Miles attempted to play through the injury, but it didn't work out. He started six games last season, getting the opportunity while Joe Price (who is expected to start on Friday) was out after picking up some broken ribs and a punctured lung in the Towson game.

Dustin Thomas, who made the transition to wideout after struggling last fall as a starting quarterback is also banged up heading into the season-opening game at Temple. He suffered a concussion during training camp, but will be available again once he is cleared by doctors.

According to Talley, the Wildcats will now have to lean more on the tight end position in the passing game, with Earnest Pettway expected to take on a bigger role as a pass-catching weapon. The athletic tight end provides quarterback Chris Polony with a reliable option.

Key to the passing game, however, will be Norman White, who is expected to get more than a few passing glances from NFL scouts. White had a breakout season in 2010 before suffering an injury last summer in pre-season training. He returns to Villanova as a fifth-year senior and will resume his duties as a playmaker on offense for the Wildcats. If he is able to shake up defenses and draw regular double-teams, it will open things up elsewhere on the field for Price, Pettway and Poppy Livers (who is expected to start in the slot).

Villanova will also need to get production from the running backs, Austin Medley and Kevin Monangai, to help the offense move the chains.

Even with the injuries, Nova will have some depth at receiver. Freshmen Kevin Gulyas, Aaron Wells (also a tailback) and Mike Burke will potentially see time at the position and Clay Horne provides a very tall (6-6) target who could be handy in the red-zone. Another wide receiver, Corey Reeder, was converted to cornerback, but will not start at that position and could potentially switch back in an emergency.