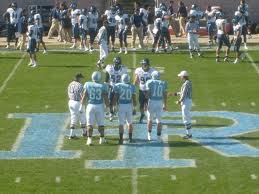 This season was supposed to be the University of Rhode Island's CAA swansong, with a planned move to the Northeast Conference for football becoming official after the school year concluded. They initially were plotting that move because the Yankee Conference had metamorphosized into a very southern-looking league as it became the CAA and saw northeastern programs like UMass, Northeastern, Hofstra and UConn either move up to FBS or drop the sport altogether.

Things changed in the past few months, however, with the CAA losing two southern members. Old Dominion is moving to Conference USA and Georgia State, the most far-flung among the football members, will join the Sun Belt in 2013. In their place, the league added two schools in the old Yankee Conference footprint -- Stony Brook on Long Island and Albany.

The conference asked URI to reconsider their decision to leave, and with the 2012 football season kicking off in just days, the Rams have decided to stay at home in the CAA.

Rhody athletics director Thorr Bjorn informed the team of the decision at a meeting this morning. The Rams will have to begin the process of once again increasing their scholarships to a full FCS allotment of 63, since they had been cutting down to comply with NEC limitations.

"We are very appreciative of the CAA, Commissioner [Tom] Yeager and all the football-playing member institutions for the re-invitation to stay in the league. They have made it clear that the University of Rhode Island is a very important and long-standing member of their association," Bjorn said in a statement.

"As has been the case in college athletics over the past number of years with conference realignment, institutions have made numerous choices to align and adjust to an changing landscape," Bjorn explained. "The recent changes in CAA football membership - the addition of Stony Brook and Albany and loss of southern schools Old Dominion and Georgia State - we felt that it makes the most sense for URI to remain in the CAA."

The decision means that CAA football will have 11 teams lined up for the 2013 season. While the league had indicated that football expansion was a closed issue after Albany and Stony Brook joined, it is difficult to imagine them remaining with an odd-number of members. With 12 members, the league could split into geographically-friendly North and South divisions that would further reduce the travel demands of members.

"All the institutions in the conference are thrilled that Rhode Island has accepted our invitation to remain in the conference," Yeager said. "As a charter member dating back to 1946, URI is a valued member and an important rival for many of our schools. We are very excited that the addition of new members Albany and Stony Brook will quickly establish even more rivalries for our five Northeast institutions, strengthening all the programs."

As it stands, the following schools are slated to be CAA football members a year from today:

That remains a very strong group, with National Championship-winning programs at Villanova, Richmond and Delaware anchoring the league as well as perennially-strong programs at James Madison, William & Mary and New Hampshire, and growing powers at Towson, Stony Brook and Albany. Six of those programs appeared in the 2011 FCS playoffs, with Maine progressing the furthest, to the Quarterfinals, where they fell 23-35 to Georgia Southern.