Share All sharing options for: Westbrook speaks on retirement 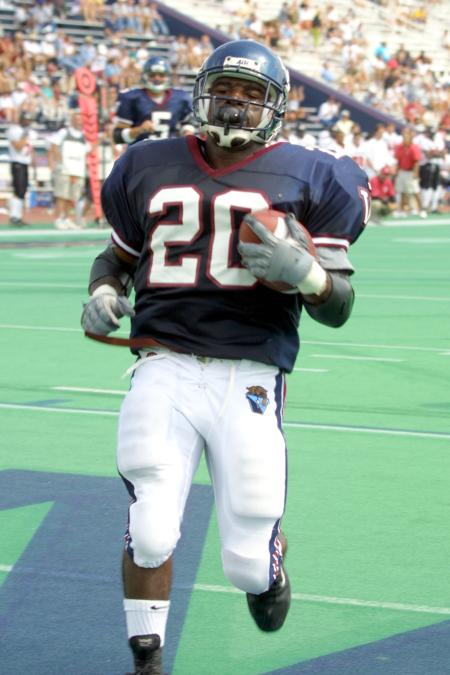 "When I think of myself, I think of Brian Westbrook ... a third-round pick that was too small, who would only be a special teams player, to an All-Pro, to a two-time Pro Bowl selection, to the franchise leader in total yards from scrimmage," the former Villanova and Eagles tailback said as he announced his retirement from football this morning.

"It's been a great ride and I thank everyone that has been here for me every step of the way."

Westbrook came to Villanova after tearing his ACL in high school and seeing the bigger schools that were interested back off. The Wildcats weren't deterred in their pursuit, however, and were rewarded with a player who would go on to accumulate 41 school records, 13 CAA (then Atlantic-10) records and 5 NCAA records as a college player. He is the only player at any level of college football who ever recorded 1,000 yards rushing and receiving in the same season.

"When I got to Villanova I expanded my support system. [Villanova University head] coach [Andy] Talley opened his doors and welcomed me with open arms," Westbrook said. "I truly appreciate that. [Assistant head] coach Mark Ferrante, [former running backs coach] Stan Drayton, [offensive coordinator] Sam Venuto, [director of athletics] Vince Nicastro, [and associate athletic director] Dean [Kenefick], thank you so much for always being there for me. I call these guys today and they'll open their doors and open their arms to me. [Athletics secretary] Joan [McGurkin] and [Athletics Business Assistant] Rosemary [Mazzotta], our secretaries, thank you for being there every step of the way."

The value of his Villanova experience wasn't lost on coaches in the professional ranks either.

"I've never coached a player as smart as this guy right here," Eagles head coach Andy Reid remarked at today's press conference. "Unbelievable; a tribute to his parents, number one, and to [Villanova head] Coach [Andy] Talley and that Villanova program and education that he received as number two.

"Nobody loved to play the game like Brian did. I mean, this guy, he could do it all. Obviously, he could run the football but he could catch the football, he could pass protect. You could split him out as a wide receiver. He could play both return games for you. This guy did it all. He'll go down as one of the all-time great Philadelphia Eagles and obviously by the number of yards that he produced offensively, being the leader in that category, I'm kind of stating the obvious there."

He performed well in his spring workouts after leaving Villanova, and was drafted by the Eagles in the third round in 2002, where he initially played as a backup to Deuce Staley. His role would eventually increase, however, and he played a key role in the 2003 season's run to the NFC Championship game. He became the full-time starter for Andy Reid's Eagles in 2004 -- his skill as a receiver was a perfect fit for the Eagles' pass-happy offense.

His production slowed after a series of injuries, including two concussions, in 2009. After signing with the San Francisco 49ers as a backup for the 2010 season, he had a few productive outings, but no longer looked as strong as he did in Philadelphia.

The Eagles also plan to honor Westbrook at Lincoln Financial Field on Dec. 23 at halftime of their game against the Washington Redskins.

He was small in stature, but his speed, hands and strength were big, allowing him to out-class defenders at every level of football. He wasn't the first great Villanova football player, and he may not have been the last, but Westbrook opened the gates for talented players with big dreams to come to the Main Line when he left Villanova as an NFL draft pick.

"I've put in a lot of hard work, a lot of long days to get to the point where I'm at," he added, when asked about Villanova head coach Andy Talley describing him as legendary. "To be described as that is humbling. I'm thankful. I've done a lot of good things and I've just been blessed to be around the right people at the right time, the right teammates to put me in the right position and for people to describe me as that is just a blessing. It makes me feel very, very humbled. I'm just happy."