Share All sharing options for: Wildcats hoping to win late on Friday 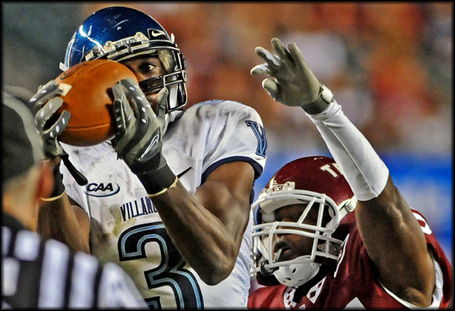 Last season's Mayor's Cup game was the first time since 1980 that a football game between Villanova and Temple had been decided by more than one score, with the Owls manhandling a young, undersized and ill-prepared Villanova team for a 42-7 win. Andy Talley described their performance in that game as non-competitive, and it foreshadowed what ended up as the worst season of his tenure on the Main Line, with just two victories. He believes that his team can perform better this Friday.

The tables are turned, slightly, with the Owls entering the game with a young football team. They return nine starters to their lineup while Villanova will start only one player on each side of the ball that hasn't been a starting player for some stretch.

That doesn't mean that the Wildcats are a veteran team, however. Many of those returning starters are only sophomores, and there are freshmen backing up a few too many positions still. However, the team will look bigger and stronger than it had in the past.

Gone is the 205-pound outside linebacker. Dillon Lucas may have been the Wildcats' defensive MVP last season, but despite leading the 'Cats in both tackles and sacks last season, he did get knocked around a bit. At 205-pounds, he wasn't at the ideal size for a college linebacker, but strength and conditioning coach Phil Matusz has helped him add 30 pounds to his frame in the offseason. He also had surgery to repair a shoulder injury that he played through last season.

Lucas isn't the only player who returns looking bigger.

Vince Kowalski lined up last fall at right tackle as a true freshman at just 265-pounds, barely bigger than JayVaughn Pinkston who plays small forward for Jay Wright. He too added significant bulk in the offseason, checking in at 290-pounds. Kyle Wallace, who will start at left guard is up to 285-pounds, after being listed at just 270 last fall.

"We're looking for a quick turnaround, for sure," Andy Talley said about his Wildcats. "That's the expectation level here. I'm not looking to just get back on the winning track. We have to re-establish ourselves. It's important to start doing the little things we used to do to win games, and to start doing that right away.

"We're probably a little bit of an under-the-radar team. Some people say, 'Well, isn't that better?' I don't know. I always like to be picked first, and know what I have. We have to earn our spurs. And nobody's feeling sorry for us, or is going to cut us any slack.

"We have to show that last year was one of those things that can happen when you lose so many difference-making players. You don't just overcome that all at once. We know what we have to do to get back to where want to be."

Having an offensive line that isn't terribly undersized will go a long way. The line did lose All-CAA starting center Dan Shirey to an achilles tear in the Spring (he could be back by the Rhode Island game if he doesn't redshirt), but sophomore Ross Hall is a big and capable body. Shirey was a fringe pro-prospect, who might still get some looks from teams as an undrafted free-agent.

That offensive line will have to be able to protect sophomore quarterback Chris Polony, who won the starting job at the end of the last season and managed to hold on to it this Spring. With some protection (and run-blocking) Polony's job will be to go through his reads and avoid turnovers. His other job will be to find future NFL receiver Norman White whenever his top playmaker is open down field.

With the receiver corps banged up (Dorian Wells and Kenny Miles are both out with injuries and Jamal Abdur-Rahman is suspended for the season), White will be a huge factor in whether or not the 'Cats can get anything going in the air. Temple will respect the 6-4, 220-pound receiver, who is much taller than the Temple corners, but a little added defensive pressure on him could create holes elsewhere on the field.

If the 'Cats get into the redzone, they will have a great height advantage in the endzone with White, 6-3 Joe Price and 6-3 TE Earnest Pettway (who also has a great vertical) all in the starting line-up. If that height isn't enough, the 6-6 Clay Horne will also be waiting on the sidelines for such situations.

The question is, how good will the Temple defense be?

That question is a difficult one to answer. The Owls were the 12th-ranked defense in the country last season, allowed just 13.9 points per game, but they lost their top four tacklers and have just five returning starters from that unit. Their secondary returns Justin Gildea, who had 51 tackles and 3 sacks last season at strong safety, and corner Zamel Johnson, who recorded 28 tackles in 2011. They also make some changes on the defensive line, with new faces coming in at the ends, as well as at linebacker.

They aren't without talent on defense, but whether this unit can achieve last season's lofty results remains to be seen.

Offensively, the Owls also have made some changes. No longer do they tout an offensive line that has an average weight of over 300-pounds (it's about 295 now), and only one starter from the offensive line returns, senior tackle Martin Wallace. They will start a redshirt freshman on the blindside.

That offensive line will be challenged by Villanova's defensive line, an experienced unit with one senior (Marlon Johnson) and two juniors (Antoine Lewis and Rakim Cox). There is also some depth there, notably 300-pound Pat Williams, who is backing up Lewis at nose, and perhaps allowing Lewis to play some defensive end this season.

The 'Cats are also strong at linebacker, where they added four freshmen with good size and strength to go along with three returning starters. The Wildcats are bigger, stronger and deeper across the front seven than they had been in the last few seasons.

They will need those improvements to deal with Temple's running game. Last season, they leaned on now-Baltimore Raven Bernard Pierce, but his backup, Matt Brown, was also very effective operating as an undersized speed-back. Brown ran for over 900 yards last season. He will be joined by Boston College transfer Montel Harris, who left beantown as BC's all-time leading rusher, but was slowed last season with a knee injury.

Quarterback Chris Coyer will also try to make some plays with his feet (and if you are wondering, his sisters will root for him and Temple). He amassed 562 rushing yards last season, while throwing for 6 touchdowns and no interceptions in the run-heavy offense. Though Coyer can be effective as a passer as well, the Owls receiving corps have a few questions to answer.

Villanova's defensive scheme has traditionally done well against the run. If the Wildcats are going to hold off the Temple attack, they will need to return to those old ways on Friday and keep Harris, Brown and Coyer in check on the ground. Forcing Coyer to throw the ball could result in some playmaking opportunities as the Villanova secondary has often given up yardage to opponents, but it might slow things down and be the best chance to find themselves in a close game.

A close game is exactly what Andy Talley is hoping for.

"I'm keeping my fingers crossed that we're good enough to get Temple into the fourth quarter and have the same opportunity for one or the other to possibly win on the last play of the game," he said.

In an FCS at FBS game, you'd be a fool not to choose the FBS team. The odds are too daunting not to. Since the I-A/I-AA split in the 1970s, the FBS (I-A) schools have won over FCS (I-AA) opponents 82% of the time, with an overall record of 1838-396-18. While Temple has 9 losses to teams from the 63-scholarship subdivision in that time (good for 11th among FBS schools), they have still won these mismatches more often than not.

Both teams have some questions to answer this season -- highlighted by the expectations-management being undertaken by Temple head coach Steve Addazio in recent interviews -- but Temple remains the safer bet to win. Villanova promises to be improved this season, but nobody will know how much they have improved until they take the field on Friday.

My prediction is that the combination of Villanova getting back Norm White and an offseason of strength and conditioning as well as the personnel losses that Temple has had (particularly on defense), will allow Villanova to keep this game closer than last season's opener. That isn't saying much, but with a monumental defensive effort it isn't unthinkable that the Wildcats could keep this game close enough for Talley to get his wish.

There will be no traditional cable television broadcast for the Mayors Cup again this year, but viewers at home can check out the game live on ESPN3.com or the Watch ESPN application. Radio coverage will be available on ESPN 950-AM in the Philadelphia market.