The Playbook: Structuring a Defense

Share All sharing options for: The Playbook: Structuring a Defense

EDITOR'S NOTE: Coach Roc Bellantoni joined the Villanova football program as the defensive line coach and special teams coordinator this off-season after spending a decade as the defensive coordinator at Eastern Illinois University. His work helped EIU win their way to five Ohio Valley conference titles during that time and he brings a wealth of football experience to the Villanova sidelines, practice field and meeting rooms. VUhoops is grateful to have @CoachRoc contribute his expertise for our readers.

The phrase "there are a lot of ways to skin a cat" was probably not invented with football in mind a few hundred years ago but it really applies. I played defense in a 3-4 system in college and a 4-4 system in college. In my twenty (wow that was tough to write!) years of coaching, I have coached in a 3-4 system, a 4-2-5 system and have spent the majority of my years coaching the 4-3 defense.

I have been a defensive coordinator for the past twelve years. Our base system was the 4-3 and we incorporated some 3-4 and 3-3 concepts on "creative downs." Those are mostly 3rd down situations or two-minute situations when you know the opponent will be in a pass-first mindset. We structured our "3rd down defense" based on the personnel in our program, trying to get the fastest players on the field. This would be the best cover guys and the best blitzers in the back seven, combined with the best pass rushers up front. Some years, there were three down linemen in this package, some years there were four.

There were some years where we would stand up one of our defensive ends to move him around and create match-up problems for our opponent and give those players an opportunity to show pro scouts what they could do as a LB. Pierre Walters played DE for us but played parts of three seasons with the Kansas City Chiefs as an OLB. Kory Lothe was another one of these hybrid DE/OLB types that signed with the St. Louis Rams.

Here at Villanova, our base defense is the 3-3-5. I have not been on a staff that has run this system and I have learned a lot about the structure of it this spring and summer. We hope to show some different looks and be multiple on defense at Villanova but our base is the 3-3-5.

The key to being a good defensive coordinator is to have your best playmakers on the field, making plays. Our job as coaches is to put them in position to make plays. We have to teach them the proper responsibilities in the defense and have them ready to make plays on game day but it is up to the players to make us look smart.

As coaches, we must structure our defense around the strengths of the players. At the college level, we can recruit and plug players into the specific roles that we need for our defense. Still, there are different skills that players have each year and different groups of players may have different strengths than groups in the past. Football continues to evolve and we must keep pace by making the changes that are necessary to stop good offenses. So, there are tweaks that we make to the system each year.

Coaches have to know whether they have the defensive backs to play a majority of man coverages or zone coverages in a particular season. They must know who the best blitzers will be at LB and DB and either move those players to a position where they will have a chance to be good blitzers or structure the defense to include blitzes that those players can run from the positions they have played in the past.

No matter what style of defense you run, there are certain aspects that must be in place to allow a defense to be successful. Every defense has gap-control in the run game. We label our gaps A, B, C and D.

4-3, 4-2-5 and 4-4 defenses use "single-gap" mindsets for the most part. That is, the four defensive linemen will be responsible for one gap. The three linebackers and any corners or safeties that have gap responsibilities will also have one gap, which will make them gap-sound vs. any run play. 3-man front defenses will have a one-gap mentality or a "two-gap" mentality. Some will play both in their packages. A two-gap system will have one or more of the defensive linemen and the linebackers responsible for two-gaps. This enables them to keep the secondary out of the run fits in terms of gap responsibilities.

Barring having more talented players in the front-seven than your opponent and simply overpowering them on every play, stopping the run is simple math. If you have more run defenders "in the box" than the opponent has blockers, and everyone is in their gap and makes their tackles, you will stop the run. 4-3 defenses will add corners and/or safeties to the box to help stop the run. 4-3, 4-2-5 and 4-4 defenses will look exactly the same when 4-3 teams add a safety to the box. Adding a safety to the box will force the defense to play with the middle of the field closed (Cover 3 or Man-to-Man).

3-4 defenses will look slightly different when adding an 8th defender to the box. They will play the same coverage system as a 4-man front team. The SS can add himself to the TE side or away from the TE side as the 8th defender. The defensive back structure and scheme is the same. The technique of the front will change, particularly if the front is in a two-gap mentality. If the "B" linebacker is not rushing the passer (based on call), he may end up at the same depth as the M/W linebackers. 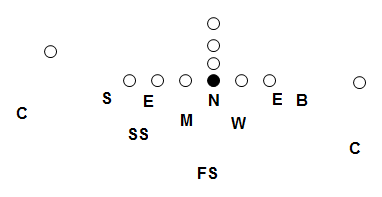 3-3 defenses will look slightly different but are playing virtually the same scheme as the 3-4 teams. The personnel is labeled differently, but the scheme is very similar. 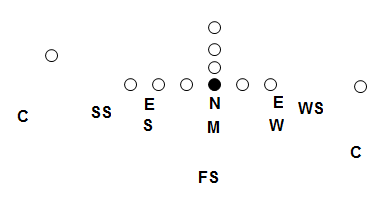 A 4-3 team can also play with the middle of the field "open", that is quarters coverage or cover two. In quarters coverage, the safeties are the 8th and 9th men in the box, truly out-numbering the offense. Cover two teams with dominant front-sevens (think of the Miami teams of the 1990's and the Chicago Bears and Tampa Bay Super Bowl teams) will play with the defensive backs thinking pass first and not adding additional defenders to the box. Cover two teams may also add the corners to the box to be the 8th and 9th defenders (think Eastern Illinois' playoff teams and North Dakota State's National Championship team in 2011- I chuckle at EIU in that conversation). 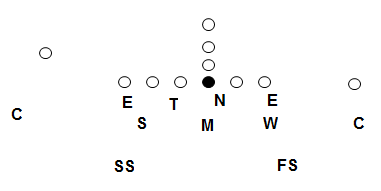 Each defense has the choice of playing man-to-man coverage, zone coverage, or blitzing with man coverage or zone blitz coverage behind it. Regardless of the defense called, there will be three factors that are consistent in every defense.

There will always be a "force" player, "fill" players, and "fold" or cutback players. The force players will set the edge of the defense on the play side. Force players are the outside-most player, be it safety, corner, or linebacker to the side that flow is going. That player must force or contain the ball inside to his help. The fill players are any second-level defender (LB or DB) who is inside-out to the football. The fold players are the outside-most players away from flow. The linebacker, safety, or cornerback who is involved in the run fit away from flow has to ensure that the ball stays inside and in-front of him on any cutback play. Below is an example of a cover-three defense playing each responsibility. The SS is the force player, setting the edge and forcing the ball inside. The Sam, Mike and any DL or FS are fill players. The fold player is the Will LB. He keeps the ball inside of him.

Cover two teams that involve the corners in the run fit would fit the play up below. The only difference is that the SS and CB flip responsibilities in terms of playing the run first vs. the pass-first. In cover two, the corner will set the edge and turn the ball inside. The backside corner will be the fold player, allowing the WLB to play faster without any cutback assignment. 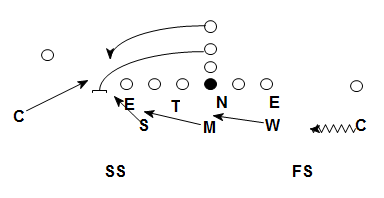 A quarters, or cover four team would have the SS as the force player and the FS as the fold player instead of the corners.

In all of the diagrams above, it does not matter whether your personnel dictates that you run a 3-man front (3-3 or 3-4) or a four-man front (4-3, 4-4, or 4-2-5). The gaps will be filled by different players based on the front and whether a defensive line is responsible for two-gaps or one. The defensive backs and linebackers would have essentially the same responsibility regardless of the scheme, be it a three or four-man front. Scheme is overrated! The key to playing good defense is placing the players in positions where they can be successful and teaching them the scheme. The best coaches are good teachers.

We teach not only the defensive scheme, but how the opponent will try to attack us, where the weaknesses are in our scheme. As long as the scheme is sound against the offense, that is against every play they can run, and our players understand how to react to every possible offensive action, we have a chance to be successful. If our players make the play that they are supposed to, the plays that come their way, we will have a good defense. Football, as a wise man once told me is "players making plays."