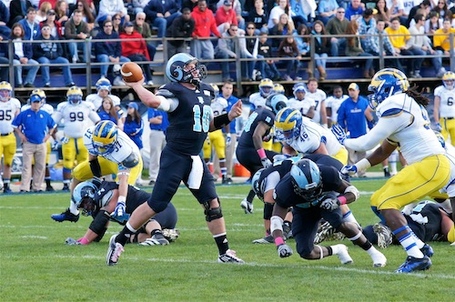 Like last week, one team on the Villanova Stadium's Goodreau Field will be coming off of a big loss while the other had a solid win. The difference is that this week, the football Wildcats will be the winners entering the match-up, while their opponent, Rhode Island, is the one trying to bounce back from a loss. The Rams travelled last weekend to Monmouth University in New Jersey and were handed a 41-6 loss at the hands of a Hawks team that has been on an upswing lately.

Monmouth isn't a CAA-level program, but they are among the best programs in the NEC, the conference that URI had been planning to join, until doing an about-face this fall. URI was in the process of decreasing their scholarship count to an NEC-allowed 40 until deciding to stay in the CAA this fall.

The Rams have a passing offense, throwing for 197 yards in the air last weekend and picking up just 49 on the ground. That means that they will likely offer a challenge for Villanova's secondary, which gave up 157 yards in the air to Fordham last week, but also grabbed two interceptions.

URI quarterback Bob Bentsen threw for 148 yards last week, with the largest portion of that yardage coming on the catches of Ramadan Abdullah. The leading receiver accumulated 87 yards last week on 7 catches and an average of 12.4 yards per catch. They will also target Brandon Johnson-Farrell often in the game, as their second option, but Abdullah is clearly their playmaker on offense.

Villanova is prepared to see the Rams throw the ball early and often on Saturday.

On defense, the Rams play a four-man front and will be working to try and control a three-headed Villanova rushing-attack that has chewed up 499 yards of field in two games so far. Austin Medley leads the way with 187 yards, while Kevin Monangai isn't too far behind with 158 yards rushing; both tailbacks are sophomores this season. Redshirt freshman quarterback John Robertson has used his speed to net 124 yards on the season and might have had a lot more if he hadn't been sacked three times last week (his rushing yards last week were cut from 93 to 46 due to the sacks).

Those sacks may not be as much of an issue in week 3, as the Rams haven't shown much of a blitz package recently — that seems to be the area that Villanova's offensive line has struggled the most with. Otherwise, the offensive line has been a strength for the Wildcats, even without star center Dan Shirey (who will need another few weeks and likely redshirt). They don't carry as much weight as the 2009 line that featured second-round pick Ben Ijalana, but they are athletic enough to create plenty of holes in the running game.

"It's probably the most athletic offensive line in the conference," Rhode Island coach Joe Trainer told Philly.com. "They get to the second level as well as anybody, and that is what causes you problems."

So the Villanova offense will likely continue to see some success in the running game, but Villanova coach Andy Talley is concerned about his team's lack of a passing attack. That will fall at least partially on Robertson, who was voted CAA Offensive Rookie of the Week for his performance against Fordham — he threw for a touchdown in the game, but the 'Cats didn't do much passing otherwise; that will need to change if Villanova has hopes of beating any of the conference's power teams.

"[Coaches] want me to be decisive," Robertson told CSNPhilly.com. "They don't want me to think about it if I'm going to run or throw. I should know what I'm going to do and just do it. A lot of times I can use my athletic ability to get away with some things. But I have to make the reads that the coaches tell me."

The running attack will remain the offense's showcase as it was when Chris Whitney was taking snaps for the Wildcats, but a passing game is needed to keep opponents from stacking the box and taking away some rushing yardage. Whitney rarely looked like Peyton Manning in the pocket, but he was efficient and capable of making his reads and hitting his receivers downfield — Robertson will need to develop the same level of skill.

The 'Cats go into this conference opener having gained some confidence from last week's come-from-behind victory. Rhode Island will be looking to right their ship this weekend, and grind out a tough road victory. The Wildcats lead the all-time series against the Rams 14-3, but URI won the most recent meeting, a 17-14 edging of a team still looking to bounce back from Matt Szczur's injury in 2010.

The Rams have had hard-luck on the road, currently with an eight-game road losing streak. Villanova had a five-game losing streak at Villanova Stadium that was snapped against Fordham last week (they were 23-1 at home prior to that steak).

The game will air live on Comcast SportsNet and is scheduled to kick off at 3:30pm. Pike Lot will open for tailgating around noon.