Share All sharing options for: Villanova trying to win third-straight at Penn 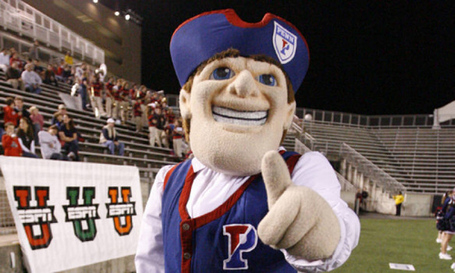 It will be the 16th time that two coaches with over 200 wins will meet on the gridiron in an FCS game when Andy Talley's Wildcats visit the local rival Penn Quakers. Chalk that up as yet another distinction for the rivalry game that was revived in the modern era and played annually over the last 10 seasons. Both teams have battled closely on the field during that time, but Villanova has taken home every victory in the program's FCS era, leading the series 11-5.

In the last eight meetings between these two takes, the average margin of victory has been a relatively-narrow 9.8 points.

Villanova will be looking to score a third victory of the season and smooth out some of kinks that have held the team back in the first three games. They would like to start faster than they have in the last two games, and go into halftime with a lead, instead a small deficit. Continuing the process of establishing a passing game is also a priority, even though the Wildcats will remain a run-first team with John Robertson at the helm.

Throwing the ball more will be a little more difficult if Norman White isn't able to play, he underwent an MRI this week after an apparent shoulder injury against Rhode Island. The imaging may have been precautionary, but a decision on the senior receiver's availability this week hasn't yet been made.

If White isn't able to play, Joe Price will become the primary outside target while freshman Mike Burke would line up on the opposite side of the field. Both players are tall and have good hands, so the 'Cats won't lose much in either of those categories, but Norman White is an NFL prospect who is a valuable playmaker for Nova.

In the backfield, Villanova may also limit or hold Austin Medley out of the game with a hamstring injury. Medley is the team's leading rusher through three games, with 228 yards on 39 attempts. If he is absent on Saturday another talented sophomore will take on the additional carries in Kevin Monangai, who has accumulated 213 yards on 34 carries so far this season.

Monangai scored twice last week against Rhode Island and is certainly capable of taking on a slightly larger role in the Villanova offense if needed. His back-up would be unknown at this point, but freshman Aaron Wells has the speed and good hands to be utilized as a third-down back.

It is possible that both Medley and White will play on Saturday, however, as their health status this week may simply be precautionary.

Penn opened their season just last week against the Lafayette Leopards, talking a 28-21 loss. They produced 423 yards of offense and 25 first downs to their opponent's 236 and 13, but a series of 8 turnovers (7 interceptions) lead to the narrow loss. Starting quarterback Billy Ragone was responsible for five of those interceptions, while Andrew Holland came in and tossed two more. The last time Penn's offense was picked off as much was in a 2007 game against Villanova.

Ragone remains listed as the starter (with close to 4,000 yards offense generated for his career) on the Quakers' depth chart, but Bagnoli is clearly not going to hesitate to call on Holland in the game as well.

The Quakers leaned heavily on their passing game against Lafayette, going for 344 yards in the air and just 79 yards on the ground. That may not remain the formula going into this game, however, since play-calling last week was likely affected by playing most of the game with a large deficit to overcome after the Leopards took a 21-0 lead in the first quarter.

A hot start for Villanova could also force Penn into a gameplan that they aren't build to execute.

Penn's running game wasn't really unleashed last weekend, but the Quakers have four players who have combined for nearly 4,000 rushing yards in the past three seasons. Senior tailback Brandon Colavita leads the group with 1,406 yards, while quarterback Billy Ragone has gained 1,096. Lyle Marsh and Jeff Jack each have generated over 700 rushing yards.

Last week, however, the Quakers ran the ball just 21 times, including 10 carries by Ragone. Colavita was held to just 13 yards on four carries and Ragone lead the way with 58 yards on the ground.

Lafayette was held to just 236 yards of offense, with 134 yards in the air and 102 on the ground. Defensively, the Quakers seemed to do a good job of getting their stops. The Leopards also turned the ball over twice on interceptions.

The Villanova defense has been huge against the pass, ranking 8th nationally in the FCS. Getting out to a hot start and forcing the Quakers to launch the ball downfield could work out well for the Wildcats. Sophomore safety Joe Sarnese has grabbed an interception in each of the last two games, and Ronnie Akins has also picked off a ball this season.

Penn would do better trying to run the ball against Nova, where the 'Cats rank just 69th nationally.

Offensively, Villanova will work off of the running game, lead by speedy quarterback John Robertson and hopefully with the help of a pair of talented sophomore running backs. Robertson will potentially have to be the key playmaker offensively, using his legs as well as making some efficient passes to his receivers to push the 'Cats down the field.

Nova can score points, and will generate some offense on Saturday, but the Penn defense is likely their best unit this season. Villanova will need to use some speed and smart passing to avoid being slowed down too much.

"They are a run stopping defense. That's what they do," Villanova head coach Andy Talley told CBS. "They put all their eggs in that basket and they challenge you to throw the ball successfully. And they have a terrific secondary. A ball-hawking secondary with a lot of speed. So they don't give you a chance to separate much. And if you can't run the ball against them, you're in for a long day."

Villanova hasn't lost a game to Penn since 1911 and the Quakers were one of two wins for the team during last season's terrible run. Penn was also down last year, and the result against Lafayette won't inspire much confidence for them this week.

That said, the Quakers have shown that they can generate some offensive yardage and their defense was effective against Lafayette. The Penn defense was put into some tough spots by their offensive mistakes, and Villanova will likely look to create the same situations.

That defense has always been ready for the Villanova game over the past decade and this week is unlikely to be much different. The history of close games and the recent history of both teams suggests that it will likely be another tight result this year. Villanova should still be able to flex its muscles and go home a winner but this will no doubt be a challenge for the 'Cats.

Kick-off is set for 3:30pm on Saturday from Franklin Field in Philadelphia. The game will be broadcast live on Comcast SportsNet -- see our Primer for more TV and Radio information.