Medley is "week-to-week" but White cleared to play

Share All sharing options for: Medley is "week-to-week" but White cleared to play 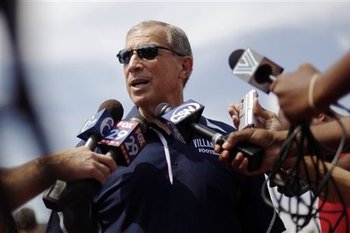 The good news is that Villanova's leading receiving target, Norman White, will play tomorrow. Though he underwent an MRI earlier in the week to take a look at his shoulder that was banged up in the Rhode Island game, the doctors were apparently not too concerned with the results. Though the Villanova passing game has hardly been the offensive highlight so far, losing White this weekend would have been a big hit for the Wildcats offensively.

Sophomore running back Austin Medley, however, will have to sit out the Penn game. He suffered a hamstring injury that had him listed as "questionable" earlier in the week. The 'Cats leading rusher was confirmed to be "out" by head coach Andy Talley to the Philadelphia Inquirer.

Medley has lead the team through three games with 228 yards and one touchdown, averaging 5.8 yards per attempt. Kevin Monangai will take the majority of the carries this week, and has had a pretty strong start himself, running for 213 yards and three scores.

"I don't know if we'll be able to run for 200 yards like we have in the first three games," Talley told the DelcoTimes.

Villanova is listing Medley as "week-to-week" and his status for the 'Cats roadtrip to Maine will depend on how he feels on Monday after being held out from team activities all week.

Freshmen Javon White and Gary Underwood will take some carries as Monangai's understudies, Talley said. White has made only a brief appearance for the Wildcats, taking three carries for 6 yards this season -- this week he may get more opportunities. Underwood has played a slightly-larger role so far, gaining 8 yards two carries, but has made his biggest impact as a receiver -- grabbing three passes for 31 yards.

Redshirt freshman quarterback John Robertson will also contribute to the running game as he has through the first three games of the season. Robertson has rushed for 187 yards and three touchdowns so far this season, but he will also be looking to target his receivers this week, as the Quakers are a run-stopping defense that will look to slow down the Wildcats' ground offense.