Are The Wildcats For Real?

The Villanova Wildcats football team is off to a 3-1 start, a stark turnaround from the 2011 season. But are these Wildcats really back, or are they beating up on weak competition?

Share All sharing options for: Are The Wildcats For Real? 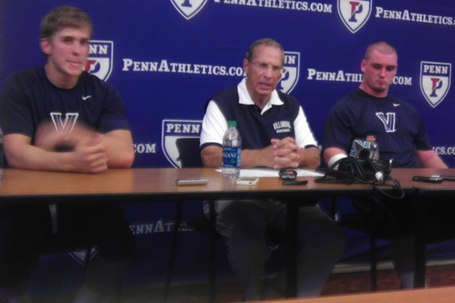 "Its all about growing and taking a young team back to where we want to be," head coach Andy Talley said about his 3-1 Wildcats.

The Wildcats lost big to Temple. Their defense had issues tackling and the offense committed too many turnovers to keep the game close. Since then the defense has improved, pitching a shutout in the second half of both home games, and holding Penn scoreless until late in the game on Saturday. The offense hasn't turned the ball over since John Robertson became the starting quarterback.

On Saturday, they passed for 213 yards, which was the first time the Wildcats had passed 200 passing yards since a 2010 playoff game against Steven F. Austin. The offense has gained yardage and scored points, which were stumbling blocks for the 2011 edition of Wildcat football; not this season. Robertson's offense has moved the ball and punched it into the endzone pretty well.

Are they back to the glory days though? It's tough to tell this early they have three relatively-easy victories this season, but how will they look over the rest of the season?

"You know, if you scoped out our first four games, you probably figured Temple was a loss but you hoped we could figure out how to win it," Talley noted. "Then the other three games, Fordham, Rhode Island, Penn, you kind of look like, they're teams that we can be in with, and maybe beat." So at 3-1, we're really where it's been schemed up, in my mind mentally, to go to Maine next week and play in foreign territory and play at a CAA level."

Villanova probably would need to win seven games this season to earn a bid to the playoffs. Right now they have three, but face a rough stretch of CAA games to get the last four. They aren't ranked and likely won't be when the next FCS football poll comes out tomorrow, but Jeff Sagarin's computer rankings have them just a notch behind Appalachian State, good for 23rd-best FCS football team.

Delaware, James Madison, Old Dominion, New Hampshire and Richmond are all ranked higher (though Nova would be favored over Richmond just slightly at home). That leaves just Maine, Georgia State and Towson rated below them, meaning that Nova will have to upset at least one of the league's top teams to have a shot at the playoffs — and that could come right down to the final game against Delaware as it has a number of times in the past.

They will also need to beat the teams that they should be better than, and that starts with a Maine team that was picked to finish two spots ahead of Villanova prior to the season.

"Its a CAA game, it's one of the places that we've never played really great at," Talley said. "It's a hard place to go into. I think Maine lost a lot of people from last year, I haven't really had a chance to take a look at them yet, but it's a team that I think we can be competitive with. I feel comfortable going in there with this team, especially with this quarterback playing the way he's playing and this defense playing the way they're playing."

Sagarin predicts a less-than-one-point advantage for Villanova in Orono.

Maine is coming off of a disappointing loss to future CAA member Albany, in a game that was almost never in doubt. The Black Bears were down 9-0 at halftime, but fought a more back-and-forth battle in the second half, losing by ten points, 30-20. It was the home opener for the CAA program that is now 1-2 on the season with a win over Bryant and a blowout loss to FBS Boston College.

A win would put the Wildcats in good position the rest of the way, especially since the 'Cats will also have a meeting with a struggling Georgia State team next month. The fewer upsets the Wildcats will need, the better.

Things can change quickly. The change from Chris Polony to John Robertson livened up the Villanova offense and it cut the turnovers right out of the game. Other than a fumble by Robertson on the run that ended up being picked up by his teammate and run in for a score, the Wildcats haven't fumbled or thrown a pick since their season opener.

The biggest area for improvement now is penalties. Six of them cost the Wildcats 52 yards against the Penn Quakers, but the Quakers had 6 penalties of their own to offset things. Nova will not get the same assistance from other opponents.

Robertson has the Wildcats heading in the right direction, but where they are at this moment is very hard to gauge. Victories over Fordham, Rhode Island and Penn aren't necessarily a cake-walk, but they aren't indicative of the ability to knock off James Madison, or to stop the likes of ODU's Taylor Heineke (who threw for over 700 yards on Saturday). It also doesn't mean that the Wildcats can't play with the upper echelon teams either. It means we still don't know where they will stand at the end of the season.

We will know more after next week, most likely, but not today.

Not a member of VU Hoops? Sign up and start commenting. Follow us on social media for regular updates as well. You can also subscribe to our RSS Feed.