Locking Horns with the Rams

Share All sharing options for: Locking Horns with the Rams 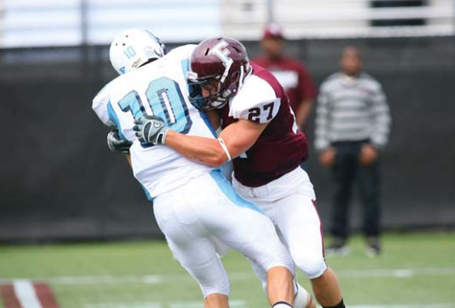 Villanova and Fordham haven't met on the turf in about a decade, with the Wildcats winning that game — a 2002 playoff match-up — 24-10 over a team that was coached by former Villanova assistant Dave Clawson. If you believe Villanova, the teams have met 18 times total, but Fordham has records of 26 meetings, both schools agree that Villanova leads the series by a large margin, with the Rams reporting that Villanova owns a 19-3-4 record against them

The most recent Fordham win over Villanova came in 1920 by a score of 12-6. The Wildcats have won each of the twelve meetings that have followed, but the Rams will arrive at Villanova Stadium feeling confident, coming off of a 55-0 slaughtering of Lock Haven University; the program's 750th victory.

That scoreline won't tell us much about Fordham's talent or scheme. Lock Haven is among the NCAA's worst football programs; a Division II school that has now lost an NCAA-record 43 consecutive games. They scored a touchdown or less in six of their ten games against Division II opponents last season and were blown out 48-6 in 2010 by a VMI team that went on to finish the season 3-8 without a playoff berth. That VMI team turned around and was slaughtered 45-0 by William & Mary a week later.

Fordham recorded only one victory in 2011, against local Ivy League rival Columbia, and went 0-6 in Patriot League play under Tom Masella. In 2012, the Rams will be coached by new head coach Joe Moorhead, a former Rams quarterback, who they hope will be better able to take advantage of their full-complement of scholarships to build a winning program. Moorhead is the first Fordham coach to open his career with a victory since 1975.

Rams' sophomore quarterback Michael Nebrich was the Patriot League Offensive Player of the Week after scoring four touchdowns against Lock Haven. Placekicker Patrick Murray was named Patriot League Special Teams Player of the week for the first week of the season. He connected on a school-record 52-yard field goal in last weekend's victory. Running back Carlton Koonce and linebacker Michael Martin were also recognized by the Patriot League recording 146 yards rushing on 19 carries for the former and nine tackles and a sack for the latter last week.

While Fordham comes into this game hot on the heels of a big, confidence-boosting blow-out win, Villanova is hoping to rebound from being on the other-side of a similar game.

Villanova's defense looked slow against Temple, but that might have been the product of the blazing speed of Temple's offensive weapons. 5-5 tailback Matt Brown seemed to blow past everyone on the field, with tacklers struggling to get a hand on him. Quarterback Chris Coyer also managed to eat up plenty of yardage with his legs. They went home with 145 and 80 yards rushing, respectively.

The Owls made substantially all of their offensive strides on the ground, however, recording just 61 yards in the air as Coyer completed just five of 11 passes.

The bright side for Villanova in the game was that the final score may have been misleading, at least according to experts like Phil Steele. The Wildcats "actually had a 365-362 yard edge and 18-15 [first down] edge," in the contest. The 'Cats allowed the score to get out of hand through a series of blunders.

Villanova coughed up a pick-six on an over-thrown ball into double-coverage and allowed a 24-yard touchdown drive resulting from a tragic fumble. An 85-yard, 12-play drive that ended in a field goal rather than a touchdown also added to the deficit.

This week, it will be important for a still-young Wildcats team to limit those mistakes and turnovers to hand a defeat to an opponent hungry for a winning streak. Part of that will likely be a change on the return team, with Kevin Monangai being replaced with the slower but more reliable Joe Sarnese on kick-offs during the Temple game. Talley will likely stay with that decision this week.

The other major roster decision will be at quarterback. Chris Polony entered the season as the starter, but was replaced by redshirt freshman John Robertson before halftime last week. Robertson went on to lead all passers in the game with 135 yards in the air (7.9 per attempt) while running for a team-leading 78-yards (5.2 per attempt) and the Wildcats' only touchdown. It was clear that Robertson's dual-threat style of play was going to be more effective.

"At this point and time we are still evaluating it," Villanova head coach Andy Talley told KYW Newsradio on Wednesday. "I'm not sure which way we are going to go. Both guys are working real hard and we just have to make the assessment and then go with it. I don't want to play two quarterbacks, but at some point and time we've got to choose one."

Robertson may well have the edge based on game-plan alone. The Wildcats are going to look to establish the running game against Fordham for ball-control, and to try and keep the Rams' offense off the field.

Fordham runs a system similar to Oregon, with fast execution and little time left between plays. It is a style that is confusing and taxing on defenses.

"Defensively they're a '4-3′. And they're a team that has a lot of players back. I think it is a team that we've got to try and run the ball against because we've got to keep their offense off the field. So it's going to be important for us to have a good running attack and pick our spots in the play-action game."

Villanova had 212 rushing yards in their season opener at Lincoln Financial Field. Austin Medley was second on the team with 62 yards on 11 carries with one 36 yard burst that helped to jumpstart the Wildcats' offense. Kevin Monangai contributed 59 rushing yards on 10 carries as well, and caught 2 passes, including a 37 yard reception on a screen pass where he broke multiple tackles advancing the ball.

The passing game is an area where the 'Cats could use some improvement, however, with just 153 yards in the air and a disappointing lack of production from top wideout Norman White in week 1. The Fordham secondary might not be as challenging as Temple's however, and once the running game is established, whichever quarterback Talley chooses will be asked to connect with White or another receiver downfield.

Defensively, Villanova wants to get it's linebackers more involved in playmaking. It wasn't a good sign that the team's leading tacklers against Temple were in the secondary. Against the run, it is ideal if the defensive line or linebackers can get the stop for short or negative yardage. Against the pass, you hope to have opposing receivers covered well enough that there is no need to tackle them in the secondary.

Villanova will have to eliminate a lot of mistakes this week as they get back to playing FCS opponents. Even with Fordham offering a full complement of scholarships, Villanova should still possess more talent on both sides of the ball, but youthful mistakes could give the Rams a chance to shine.

Both teams will lean on their offense to make things happen. Fordham hopes to run a lot of plays, confuse and challenge the Villanova defense to get stops and perhaps exhaust the Wildcats. Villanova will take a different approach, looking to eat up clock with a running game and keep pace with the Rams in scoring. If the Villanova offense can generate enough long drives, it would potentially minimize the effect of the Fordham offense's quick playcalling.

That strategy is likely best suited for Robertson's skillset, but Polony could also manage the game as the starter if needed, with the help of Medley and Monangai.

Fordham is ultimately a tough team to gauge, but it should be a contest that the Wildcats can win, if they execute well.