Villanova football picked by coaches to win the 2013 CAA Title

The CAA football conference gathered this morning in Baltimore to host their annual media day. The event includes a number of interviews and announcements geared to prepare fans and media alike for the coming fall football season. Among the announcements were the preseason awards and projections.

Share All sharing options for: Villanova football picked by coaches to win the 2013 CAA Title

Villanova finished the 2012 CAA Football season with a share of the (official) league title (unofficially Old Dominion had the best record), the automatic qualifier to the postseason, and a remarkable turnaround from an awful 2011. Those factors, and the large contingent of returning players were likely factors in CAA coach and SID's thinking while voting in the preseason poll.

The Wildcats received 11 of 22 possible first-place votes to lead the poll. Towson was in second-place and Rhode Island was picked to finish last. Newcomers Stony Brook and Albany were picked seventh and tenth, respectively. Stony Brook is coming off of a postseason that included a decisive win over Villanova in the first round. Albany is converting it's program from the lower-scholarship limits of the NEC and league personnel are clearly anticipating some growing pains. 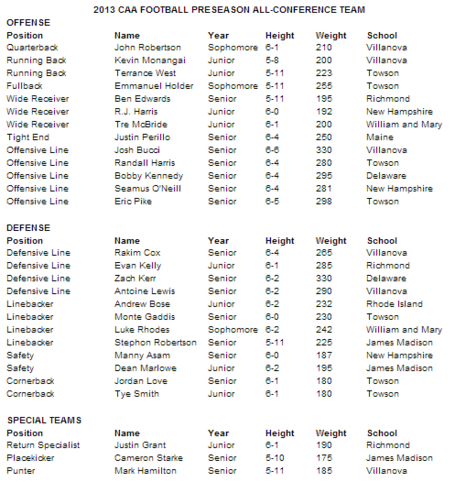