The former Wildcats big man and McDonalds All-American will return to Villanova basketball as Director of Student Athlete Development.

Share All sharing options for: Jason Fraser returns to the Main Line as Director of Student Athlete Development 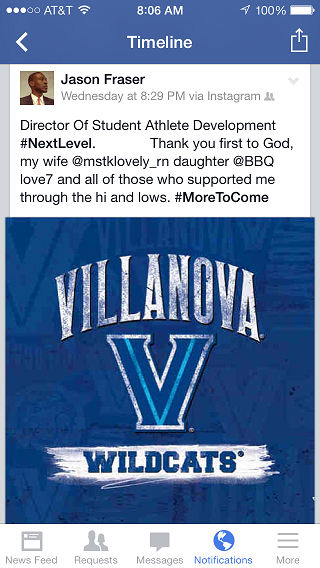 With Curtis Sumpter working practices for the Sixers these days, Villanova had an empty billet on the basketball coaching bench. That spot will be filled instead by another member of Curtis Sumpter's recruiting class, former McDonald's All-American center, Jason Fraser.

Fraser broke the news of his new position on his Facebook page this week.

The Villanovan whose career was plagued by injuries rather than star-performances worthy of his high recruiting rankings, graduated from Villanova in 2006 and other than a stint with the Harlem Globetrotters that ended in 2009, he hasn't worked in basketball.

The position Fraser is filling has a slightly different title from the one that was created for Sumpter in August 2012. Sumpter was the "Student-Athlete Development Assistant," while Fraser reports that his title will be "Director" of Student-Athlete Development. That distinction may hold little meaning, or it may signal that the big man's role is slightly different, perhaps holding a larger administrative component due to his experience working in higher education.

He has worked as an insurance agent, an admission representative for Sanford-Brown University and most-recently, as the Dean of Students for the United Way of Long Island. This will be his first position in college athletics.

Fraser has a wife, Tashay, and a young daughter, and his family will have to relocate from Long Island to the Philadelphia suburbs. They have lived there since Fraser left Villanova.

He is the third member of his class to return to the Main Line to work for Jay Wright, and the second to leave a non-basketball job for his post.

In addition to Sumpter, Baker Dunleavy -- who is now the associate head coach, left a position working in finance for Merril Lynch in 2010 to join the Villanova staff. After a quick move from the bench to the weight room, Dunleavy was pulled back onto the staff and fast-tracked to become Wright's right-hand. Fraser will be hoping to make as big an impact as his former teammate.