Villanova Media Day: Don't hold your breath for a traditional line-up at Guard U

Share All sharing options for: Villanova Media Day: Don't hold your breath for a traditional line-up at Guard U

"By the end of last year we were a pretty good team... The challenge for us is to build on where we were last year," Jay Wright told reporters.

Wright doesn't appear likely to treat this season any differently, even with so many players returning. This much is clear: his team is operating under business as usual. Most of the players said the biggest part of the summer was incorporating the young guys. Jay chose to give his team consistency rather than rocking the boat.

"We take every day the same as we did last year and the year before that," Darrun Hilliard said. "Come in and be the best we can be."

"I don't see it as a new season at all," Dylan Ennis explained. "I've been here. I've been here with my guys."

One of the strengths of this team is its backcourt and depth at guard. Ryan Arcidiacono and Tony Chennault are proven players, and Dylan Ennis' name has been buzzing since he arrived last year. Fortunately none of the players seemed concerned with selfish motivation.

"With the guards, Coach will have a good rotation for us,"Arcidiacono assured reporters. "It really doesn't matter who brings the ball up, because someone is going to have to get us into the offense... It could be Dylan, it could be Taj [Bell]. There's no point guard, shooting guard, or anything like that. It's just guards and forwards."

Arch's sentiment was echoed by Ennis. When asked whether they thought he would play point guard or shooting guard, he said, "Coach always says be a basketball player. Coach doesn't want you to be a 1 or a 2. He wants you to be able to do everything - pass, shoot, rebound." 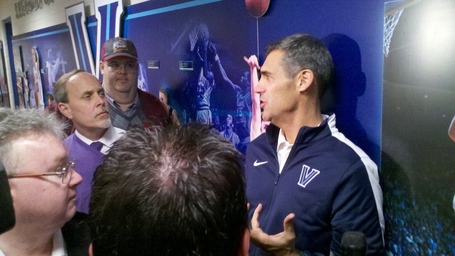 While the preseason mentality hasn't changed from the norm, the strategy definitely has. Coach Wright is fully aware of his small front court. He emphasized how much this team will miss Mouphtaou Yarou, calling him "one of the best rebounders in the country." Wright explained that although Mouph did not put up large numbers, his physicality wore down opposing teams and centers.

The solution? The coaches will look for a team effort. It starts with team rebounding and activity on defense. More players will step into the paint. Guys like Hilliard, and Bell, and Josh Hart could see time at 4 and 5. Kris Jenkins was brought up in the center conversation, while Darryl Reynolds went largely unmentioned. Strategically, Wright is harkening back to Guard U.

"We're definitely going to go back to the 4-guard offense, and Ochefu needs to be on the floor; we'll play JayVaughn," he explained. "You can never have to many guards.

"You can have too many guards if they're not good enough," he added jokingly. "We feel like all the guards we have are ready to play.

"I think we'll be a little bit more of an aggressive team defensively... Little more trapping, little more press-oriented. We'll be a more mobile team. We'll be more - style of play - like we were like '11, '10, and '09."

This team's parts are nearly the same as last year, but their sum will look very differently. They are old dogs with new tricks. Will Wright's revised strategy make up for the lack of size? Will these guards have the talent to carry the team? We will get a better sense of that Friday at Hoops Mania and Saturday at the Blue & White Scrimmage.