Five Observations from the Wisdom of Crowds Voting Results

The votes are tallied and it's time to announce the results of our fourth annual "Wisdom of Crowds" poll.

Share All sharing options for: Five Observations from the Wisdom of Crowds Voting Results

As you recall, we gave the background and premise of the Wisdom of Crowds experiment and asked our VUHoops readers to predict which players will step up to replace 19% of last season's offense produced by departed players Mouphtaou Yarou and Mo Sutton in a series of reader polls this fall. A record total 3,272 votes were cast, 69% more than last season's record total. The news is good for 'Nova fans - the Crowd predicts that the Cats should have more than enough offense to make up the deficit. Here is where the points will come from. 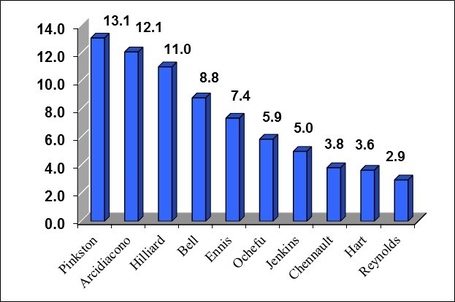 What follows are five insights that jumped out from the data (at least for me).

1. The Whole Is Worth Less than the Sum of Its Parts: We are more optimistic about the PPG of individual players than the team as a whole. Tallying the individual PPG predictions would suggest that the team will score 88.9 PPG (assuming all players play in all games). However, when asked how many points the team would score, the Crowd predicted only 73.6 PPG.

2. Team Scoring May Surprise The Crowd On The Upside: After normalizing the raw predictions, the Crowd is anticipating only small year-over-year PPG increases for some key players (Ryan Arcidiacono and James Bell each up only 0.2 PPG) and even PPG decreases for others (JayVaughn Pinkston down 0.2 PPG and Hilliard down 0.4 PPG). If the predictions for this group prove accurate, they will be a disappointment relative to historical year-over-year scoring increases achieved by past Nova players. The table below shows the year-over-year increases in scoring for a sample of recent ‘Nova starters. As a group, the players had an average annual PPG increase (CAGR) of 37% in the years following their freshman seasons.

4. Jim Dribbles Will Not Be Happy: So much for the balanced scoring that Jim craves deep in his basketball soul. The Crowd thinks 64% of the scoring will come from guard play. It should be a rarity that Ochefu and Pinkston are both on the bench, but we should not be surprised to see Pinkston playing center joined by four guards when matchups permit or circumstances dictate.

5. More than Enough Offense to Replace Mouph & Sutton's Points: The loss of Mouph's 9.9 PPG and Sutton's 3.3 PPG will be more than replaced by the 18.9 combined points the Crowd expects from the four newcomers - Ennis, Jenkins, Hart and Reynolds. Rebounding and defending opposing bigs, however, are a different story.

When the season comes to a close, we will take a look to see how accurate our predictions were. Until then, what do you think - is there wisdom in the VUHoops crowd?