Balance of Trade: How Has Villanova Fared In the Transfer Game?

Share All sharing options for: Balance of Trade: How Has Villanova Fared In the Transfer Game? 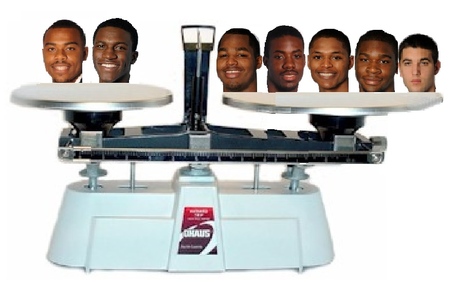 Villanova's roster has been dramatically reshaped by transfers in recent years, but the Wildcats are not alone in that distinction. ESPN's Dana O'Neill wrote in a recent article that "40 percent of college basketball players will switch schools during the course of their eligibility, a staggering number that has caught the eye of everyone within the sport." For Villanova, gone are Markus Kennedy, Isaiah Armwood, Tyrone Johnson, Achraf Yacoubou, and Mislav Brzoja. On the plus side of the ledger are inbound transfers Tony Chennault and Dylan Ennis.

As the out-of-conference portion of the season draws to a close, we thought this might be a good time to take stock of how the various Villanova transfers have worked out for the players and teams involved.

Tony Chennault, Reserve Guard: The headline of the recent FanPost by Corollary seems to suggest Tony Chennault is Villanova's best player. However, it is clear that Corollary did not intend for that headline to be taken literally. Rather, his message is that despite the drop in Chennault's scoring average since last season, the team seems to play better when he is on the floor by virtue of his intelligent decision making at point guard and his strong defense. Here's Tony's stats over the past two seasons:

Dylan Ennis, Reserve Guard: The long awaited arrival of Dylan Ennis was delayed by a broken third metacarpal bone in his shooting hand in practice on October 24. He burst onto the scene in the Battle for Atlantis, shooting a staggering 8-10 (28 points) over his first two games against USC and Kansas. However, Dylan's hot shooting cooled quickly, as he shot a combined 9 for 32 (28%) over the Cat's next five games. Yet, âNova fans remain excited about Ennis for good reason, including the energy he brings plus a 3.7:1 assist-to-turnover ratio, excellent rebounding and the ability to get to the line. Here's Dylan's stats so far this season:

Isaiah Armwood, Starting Forward, George Washington Colonels (10-1, RPI #48): Isaiah has started every game this season for the Colonels and leads the team in minutes per game, free-throws, rebounds, blocks and turnovers, and is second in points scored and field goals. He has scored 20 points twice this season in wins against Manhattan and Rutgers.Â  Watching Isaiah this season, his play still reminds me of popcorn popping. Here's his stats so far this season:

Tyrone Johnson, Starting Point Guard, South Carolina Gamecocks (3-5, RPI #88): Tyrone became eligible to play in November and has started all seven games the Gamecocks have played since. He has scored 18 points twice in wins over Longwood and Florida International. He leads the team in points scored, field goals, free throws made, and assists, but also leads in turnovers. South Carolina's record may be bad, but it includes losses to some quality teams, including Baylor (RPI #23), Oklahoma State (AP #9) and Manhattan (RPI #62). Here's Tyrone's stats so far this season:

Markus Kennedy, Reserve Power Forward, Southern Methodist Mustangs (10-2, RPI #72): While not a starter, Kennedy is the first man off the bench and fourth on the team in minutes played. He is first on the team in free throws and blocked shots second in total points, field goals, rebounding and steals. He scored a season high of 17 points in win over Texas Pan America. Here's Markus' stats so far this season:

Achraf Yacoubou, Redshirt Guard, Saint Louis Billikens (11-2, RPI #58). After two years at Villanova, Ach transferred to Saint Louis University. As a sophomore at Villanova, Yacoubou averaged 2.9 points per game in 12.0 minutes of action, but saw his floor time all but dissapear in the latter half of the Big East schedule. Under NCAA rules, he must sit out for the 2013-14 season.

Mislav Brzoja, Redshirt Guard, Evansville Aces (6-6, #188 RPI): After playing sparingly in his freshman season at Villanova shooting guard and representing his native Croatia in the FIBA Under-19 World Championships, Mislav decided to transfer to Evansville in search of more playing time. At Villanova he played a total of 41 minutes in 17 games, playing a season-high eight minutes in Villanova's 75-57 loss to Columbia on November 20. Brzoja managed to score two points in his first appearance of the season (the opener against the University of the District of Columbia), but did not score in any of his remaining 16 appearances. Under NCAA rules, he must sit out for the 2013-14 season.

Dana O'Neill wrote a wonderful article today on Villanova's resurgence by getting back to the basics. In it, she says, "Wright's class for 2014 is already set -- forward Mikal Bridges and point guard Phil Booth, four-star prospects each -- but plenty of players have offered their services, both freshmen and transfers, if Villanova is interested in taking on a few more. The Wildcats are not. Where once Wright tried to play the game of backing up his roster in case players left early, or taking transfers or hotter commodities that showed interest even though he and his staff hadn't really invested much in return, he's politely declining. "That's what I mean when I say take care of your guys," he said. "You take these others and it not only affects the guys you have in that class, it affects the guys that are already here. You end up with too many players and you can't take care of everybody." The players Wright has now are his kind of guys ... people who wanted to be at Villanova."

Clearly, Messrs. Kennedy, Armwood and Johnson are all doing well and making important contributions to their new teams.Â  However, Dana's comments suggest that their transfers, while painful at the time, were a necessary step in building what has become one of the very best teams in the nation.Â  The additions of Messrs. Chennault and Ennis were equally important toward that end.Â  Hence one might reasonably argue that the balance of trade in the transfer market in recent years has a decided tilt in Villanova's favor, if not in numbers then in effect.Â Â  What do you think?