The Brothers from Brampton: A sibling rivalry tomorrow for Dylan and Tyler Ennis

New York and Philadelphia will both be tuned in for Saturday's top-10 showdown, but one of the game's best story lines starts in Brampton, Ontario.

Share All sharing options for: The Brothers from Brampton: A sibling rivalry tomorrow for Dylan and Tyler Ennis

Just west of Toronto and North of Mississauga, Brampton is known as the Flower City, with 523,911 residents, it is the ninth-largest city in Canada -- ahead of Halifax and Saskatoon, and just behind Vancouver. It is the home town of NHL player Rick Nash, men's curler Wayne Middaugh and women's curler Allison Pottinger (as well as television's Alan Thicke). It is also home to the Ennis family, who have effectively built a basketball machine on the outskirts of Canada's largest city. 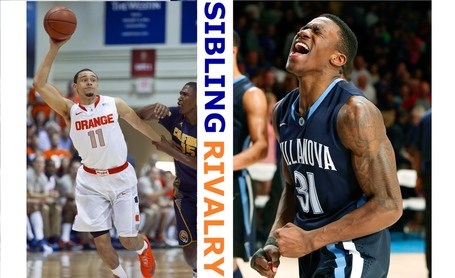 Oldest brother Brandon Ennis played Division II basketball for the University of the District of Columbia, where he recently graduated. Dylan Ennis is currently a redshirt sophomore at Villanova, after launching his college career at Rice University two years ago. Tyler, however, is the most-hyped Ennis yet, off to a big start at Syracuse University after being highly recruited. There is one other brother, Tyylon, and two sisters Brittany and Domonique, as well, and it's a safe bet that they all play a little roundball.

Based on the increasing level of recruiting hype with each passing class year of Ennises, coaches may want to get in touch with father/CIA Bounce AAU coach Tony McIntyre soon about Tyylon Ennis, who is already working in his dunking and shot-blocking skills.

The whole family is in the basketball game, it seems, with their father being responsible for most of the big name college and NBA talents coming out of the land of Maple Syrup and Tim Hortons.

The middle two Ennis brothers have both played a role for their undefeated schools this season. Dylan is a change of pace off the bench, playing 21.4 minutes per game for Villanova. Tyler is the starting point guard at Syracuse, where he averages 31.5 minutes per game.

Though their roles are different, each has compiled a pretty impressive statistical record so far this season.

Tyler has averaged more assists for the Orange this season, but Dylan's 3.1 isn't bad at all for just 21 minutes per game in Villanova's offense. Nor are his 9.1 points very shabby looking compared to Tyler's scoring average. The elder Ennis has scored an 0.43 points per minute of play, which is a higher clip than his brother's 0.38. Though Tyler is apparently a better 3-point shooter than his brother, the older Ennis is apparently the better scorer -- and he makes his free-throws.

Dylan will also have to defend his little brother at some point, but this won't be the same as their driveway one-on-one battles in Brampton.

"He always tells me, ‘you've gotta guard me, but I'm in the zone, so I don't have to guard you," Dylan told CoBL.

The two brothers have never played against each other before in a competitive game, surely adding to the interest level for friends and family -- who may have as many as 50 spectators in the stands.

While they may not have shared their respective game plans at the Christmas dinner-table, the brothers are close. That brotherly love, however, won't make things any easier on the court, where the fierce competitors within them will emerge. While Dylan may root for his brother to succeed in 30 other games this season, in this one, he wants Tyler to lose.

"The competitor in me overshadows the brother in me," he said. "He's my brother for 364 days out of the year, and that one day we play him, he's the enemy."

If there is a question about which Ennis is better, this game alone won't prove it. The game will not be one-on-one. Win or lose, the game will decide which team is better, not place a value on any individual players, especially not a pair of Canadian guards who know each other better than any other two players on the court.

That won't stop anyone from watching two of Canada's Division I basketball exports trying to keep their school's record clean. From Philadelphia to Toronto, eyes will be on Number 31 in blue and 11 in orange, and comparisons will be made, but the reality is that the four other match-ups on the floor at any point will play a bigger part.

What the Ennis' represent, however, is a microcosm of the Villanova/Syracuse rivalry. While they compete fiercely on the hardwood for a win, there has never been a fierce hatred off of it. The Ennis family sticks together like fingers covered in maple syrup, and while Villanova and Syracuse have never been portrayed so closely in media or by fans, consider this: the two programs have played 70 times overall -- as many as local rival St. Joseph's -- and Villanova was among the first Big East rivals to ink a deal to play the Orange after the old Big East split up.

Staying close seems to be a priority.