Share All sharing options for: Villanova Basketball: Scouting the Offense

After noticing this trend a couple games into the season, I decided to start tracking three-point attempts in detail beyond a box score or even play-by-play level. The goal being to write about my findings leading up to the Syracuse game, who year after year is the premier team in the NCAA at making opponents take bad threes. 283** three-pointers later, I have both data and the "eye test" to discuss the overall impact on the offense. Corollary's post serves as a great introduction to the information to come. While he focused more on the theory behind letting it fly from three, the following is a look at the results thus far.

**11 three-point attempts are missing from my sample. The majority of these are from the opening minutes of the Rider game. Fox Sports One was still showing the end of the St. John's game at that time.

1. The team really is "shooting 'em up, and sleeping in the streets" to start the season.

One of the many things I charted was if the ball went inside during the possession prior to a three-pointer being taken. "Inside" is a bit of an ambiguous term, but I defined it as drives or post-ups that forced the defense to respond. It's difficult to put the 42% from above into proper context without a league average for comparison, but from a scouting perspective it definitely feels like Jay Wright is content with early threes. Take a look at attempts by time left on the shot clock: 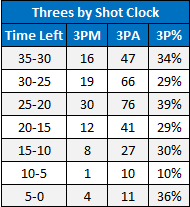 As you can see above, 3P% has been relatively solid on early attempts. However, we have to consider the opportunity cost of these shots. By taking an three early in the shot clock, a team is essentially giving up the chance at finding a better shot (i.e. - an open layup) to ensure a turnover-free possession. Not surprisingly, TO% has dropped considerably for the Wildcats to the start the season. As long as everyone is sharing the ball and taking quality shots, early threes aren't a bad strategy.

2. Almost every three is the result of ball movement, except for Arch.

Arch's early season struggles are well-documented. Instead of beating a dead horse, I'd rather focus on the other shooters. Darrun Hilliard, Kris Jenkins, and Josh Hart have all been effective spot-up shooters. Hilliard leads the team at 39% in catch-and-shoot situations, while the two freshman are right behind him at 38%. James Bell has been a bit of an enigma through 11 games. Although I don't have the exact number, the senior easily leads the teams in air-balls. He is shooting just 27% on catch-and-shoots, despite multiple hot shooting stretches (most notably in the second half vs. Kansas).

Sample size is still fairly small for each player, and I think the more important thing here is the signs of good ball movement (not isolation basketball). The Wildcats are 7th in the entire country in assists per made field goal.

3. Really good things happen when the ball goes inside.

Every coach in the country will tell you that the best threes are when the ball comes from the inside. This enables the shooter to step into his shot. Chennault has been by far the best at setting up shooters. Surprisingly, JayVaughn Pinkston has only kicked the ball out for 3PAs five times. The most obvious reason for this is that Pinkston's can be a black hole down low. I mean that in the best way possible, because he is shooting 59% from two and still great at getting to the foul line. It should be noted that hockey assists weren't recorded. Here's a full player by player breakdown: 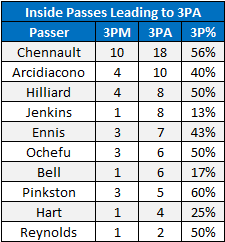 Sample size is too small here to take anything away from 3P%, but the table does show who is best at getting into the lane. On film, I was pretty impressed with Jenkins' decision-making on the inside. Definitely something to look for as he continues to develop this season.

In the NCAA, the three-point line is the same distance all the way around. However, Villanova's shooting has been drastically different depending on location. I'll let the images speak for themselves: 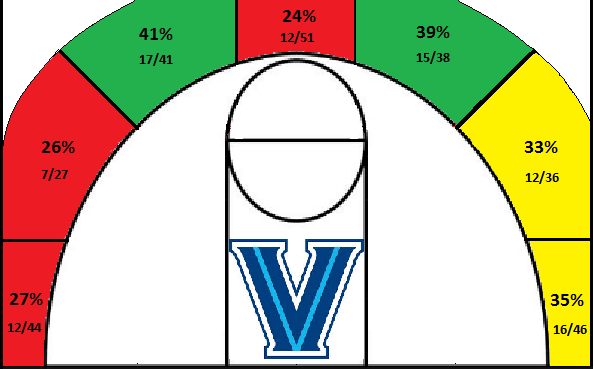 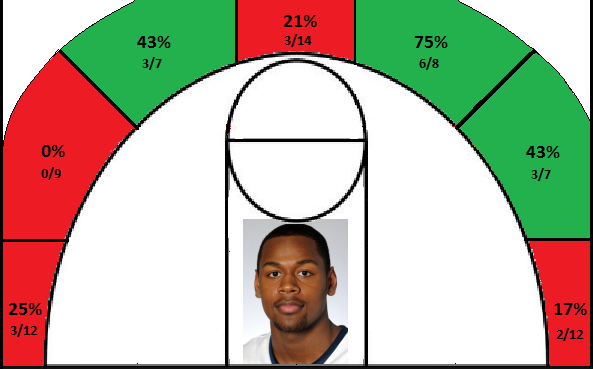 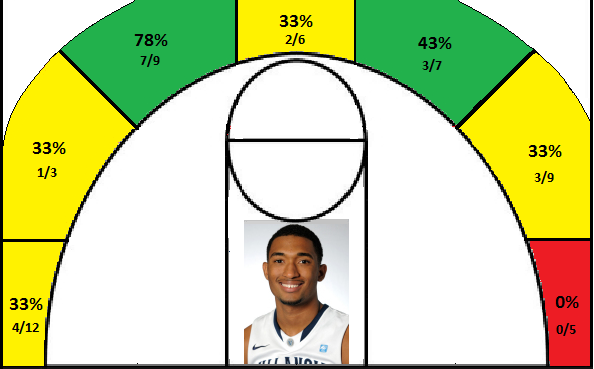 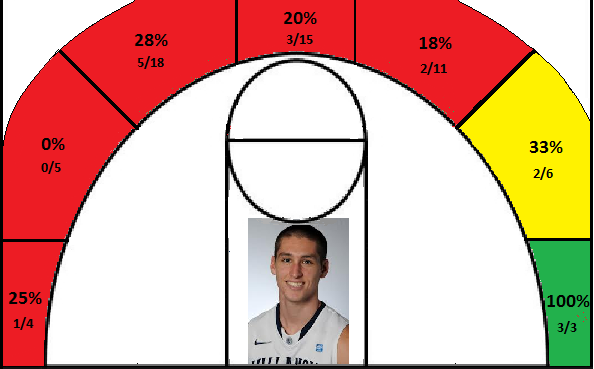 Even with the new hand checking rule changes, Villanova has actually gone to the foul line slightly less than last year's team. The numbers indicate that aggressive takes to the hoop will not only generate points at the line, but also help increase 3P% by moving the defense. The defense is already playing at an elite level, but even marginal increases in offensive efficiency over the next few months would make this team extremely dangerous in March.