With the exception of Temple, the out-of-conference portion of the schedule is now in the books. Let's take a look at how the Cats have performed so far.

Last year, the Cat's concluded the OOC portion of their schedule with a 9-4 record, and entered Big East play winning their last five games by an average +13 points (albeit against teams with an average RPI of 214). This season, the Cats improved on that record, going 10-1 and are ranked among the best teams in the nation.

Although only Mouph Yarou and Maurice Sutton are gone from the core of last year's team, which made it to the first round of the NCAA tournament, this is clearly a very different team than the 2012-2013 vintage.

Last season at the conclusion of the OOC portion of the schedule, the Cats' outstanding offensive strength was its ability to get to the free-throw line (#4 nationally in free throws made).  However, that team was poor at protecting and distributing the ball (assist-to-turnover ratio was # 264 in the nation) and scoring (255th in the nation).  Defensively, the Cats' Achilles heel was its perimeter defense (#265), where its opponents hit 35.8% of their shots.

The addition of Dylan Ennis, Josh Hart and Kris Jenkins and the emergence of James Bell as a consistent scorer have changed the team profoundly.  As we enter the Big East portion of the schedule this season, the Cat's outstanding offensive strengths are distributing the ball (16.6 APG ranks #20 nationally), rebounding (40.8 total rebounds per game ranks #24), scoring (80.8 points per game ranks #38 nationally). Defensively, the Cats are holding opponents to 38.8% FG% (#30 nationally) and 65.2 PPG (#57 nationally).

We have been tracking the team's progress this year using a model we built based on the seminal work of Dr. Dean Oliver, Basketball on Paper. That model tells us, ex-post, which team should have won the game based on head-to-head comparison of four in-game stats - eFG%, TO%, OR% and FT Rate.  Dr. Oliver found that the team that prevails on at least three of those statistics wins most basketball games. A fuller explanation of Dr. Oliver's study is provided in our November 26 post.  The model has successfully picked the winning team in all eleven games the Cats have played this season.

As indicated in the table below, the Cats have generally won by outperforming their opponents in eFG%, OR% and FTR.  However, we have seen a troubling trend in Villanova's advantage in FTR (the strength of last year's team).  In three of the last eight games, the opponent has thrashed the Cats in the FTR stat  (including a 79% to 44% clobbering by Syracuse in Saturday's game). 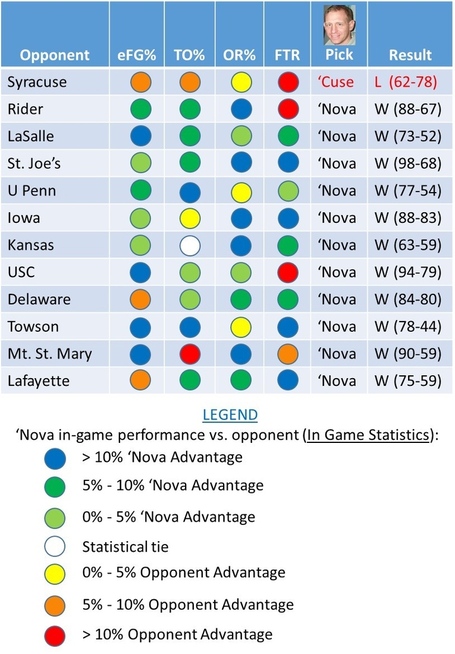 Clearly the Cats need to work on getting the ball inside more to increase their opportunities at the charity stripe.  What else should be a priority on Coach Wright's To-Do List for the second half of the season?