What's in a name? Should the 'Holy War' moniker be retired?

Villanova's History Department Chair is on a crusade to end the use of "Holy War" to refer to college sports rivalries. Why is it such a big deal, and should we even be giving him any attention?

Share All sharing options for: What's in a name? Should the 'Holy War' moniker be retired?

Academic faculty are different. They live in a specific sphere of study for most of their career, focusing and obsessing to ensure that they produce relevant and (most importantly) publishable research to meet their employer's expectations. So, it is not really a surprise when a professor obsessively pursues a cause that seems irrelevant to the rest of us.

In fact, had the Philadelphia Inquirer not given the History Department Chair some ink this morning, we likely would have continued to ignore it. The news is hungry for a story, however, so out with the Holy War and in with Rosier's crusade. Perhaps a 'crusade' is too strong a word for what the University of Rochester Ph.D. is on to, in fact, by his own words, this isn't the most pressing issue.

"I'm sure there are bigger issues," Rosier told the Inquirer. "Certainly Villanova is tackling bigger issues."

Nonetheless, this little issue is one that burns the academic when he sees it. To us, it is a name that describes an intense rivalry between two religious Universities, to Rosier, it is connected to rape and poverty.

"But war and poverty and abuse of women are all tied to violence, and the way violence can become acceptable in language - when it is normalized, and young fans hear it so casually, I think it sends the wrong message."

He's Igniting Change, but is this change heading in the right direction? Is his argument even on-point?

The issue with Rosier's argument about the use of the term "War," is that the message he believes is being transmitted, likely  isn't the one that an overwhelming majority of fans will receive. Is poverty and abuse of women the imagery that first pops into your mind when hearing that term? My guess is that it isn't.

Maybe the problem there, is that the term "war" and war-related terms have been normalized for centuries in human society. Someone campaigning for political change is a "crusader." When the government works to eradicate drug use, it is a "War on Drugs." A game between teams perceived to be closely-matched is a "battle," while a blow-out is a "slaughter."

Try to think of a term for a blow-out that doesn't have some sort of violent origin.

Yet, sports are a pathway to peace. These "battles" on court or a playing field have been utilized for that purpose famously by the Olympics and for those who saw 'Invictus,' by Nelson Mandela (may he rest in peace), as he campaigned to unite and connect South Africa after Apartheid. Despite the violent language attached to sports, the message they can deliver is one of peace. 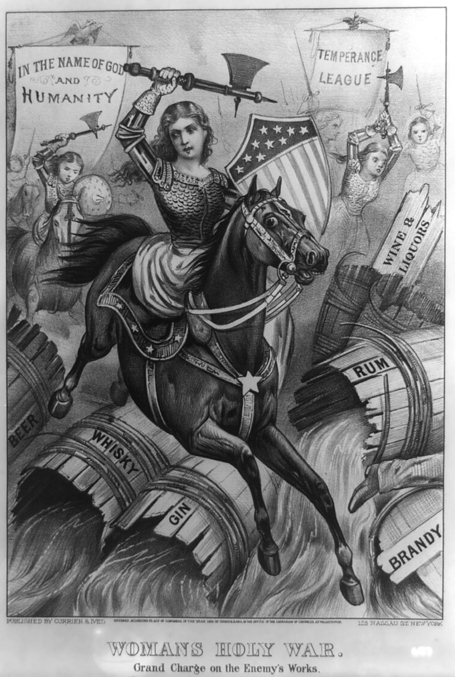 The imagery of war, even religious war, has been used to describe movements throughout American history. This image, titled "Womans Holy War," depicts a campaign for temperance from 1874

Not all wars lead to poverty. In fact, the American Revolution was quite successful in avoiding that. War, even a devastating nuclear blast, did not drive Japan into poverty either (they have the third-highest GDP), and women are not abused any more there than in Nebraska. The connection of war to poverty and abuse of women is largely a product of wars being more common in nations that are impoverished and that have traditions of abuse to women (by western standards).

As I was taught long ago at a fine university in the Philadelphia suburbs, post hoc ergo propter hoc, correlation does not imply causation.

With a focus on Native American history, sporting traditions have played  a part in Rosier's work, writing about the use of "Redskins" for a team name and the "tomahawk chop" traditions at FSU and elsewhere. While those traditions may be demeaning or  derogatory toward an ethic group, who does the term "Holy War" demean? The Knights Templar?

Rosier first requested that media drop use of the term "Holy War" about four years ago, according to the article. He mostly succeeded at the time, but the success was short-lived. The article reports that among Rosier's supporters are Villanova coach Jay Wright and St. Joe's athletic director Don DiJulia.

DiJulia, ironically, compared the game to the annual Army-Navy rivalry game, that features two academies that prepare their graduates to lead troops into war. The pageantry of that game includes student bodies dressed in military uniforms, troops marching in formation into the stadium, flyovers by military aircraft and other displays of military might.

Apparently the bookstores at both universities are also on-board, having told the professor that they would cease selling "Holy War"-branded t-shirts that caused him offense. They agreed to a design and name competition for next season.

Most-likely few at Villanova will participate.

When the professor asked his class what they thought about the rivalry, few had much to offer. The 'Holy War' has become a "St. Joe's thing," he reported. If there is a reasonable argument to change the rivalry's name, perhaps that is it -- a one-sided rivalry is hardly worthy of a name that implies such a level of intensity.

"There's not a fun element to a holy war and religious violence," Rosier said.

There isn't a fun element to any war, of course, but there is a certain element of romance and intrigue. Blame Ernest Hemmingway for adding that to our culture, but it is there, even in pain and loss, there is a certain valor that humanity ascribes to victory and service to one's country that translates easily to from a soldier representing the colors of his nation to an athlete representing the colors of alma mater.

The Holy War is what it is. It is two similar schools putting their best on the court for the alumni and students they represent; it is everything that is right about college sports.