We have had a lot of discussion on the next C7+ targets. This post is intended to put some of the quantitative inputs on the table, provide a perspective of the geography, and to look at the broader list of candidate programs.

I am going to make some assumptions here. Xavier and Butler are consensus favorites so I am assuming they are in without much real argument. Also, that the Zags are out. Because geographically they are way out. They are not only west coast, they are Spokane. Love the Zags, sorry.

The 5 year Sagarin averages are referenced for some guide to performance on the court. It is not the end of the argument for performance, just one relative guide. The Shockers are not on the list either, as they are outside even this expanded geography and are not above the other listed choices. Sorry Shocker fans.

I continue to fight for the East Coast perspective. The new conference is in danger of becoming mid-west centric. No snobbery here, I love the mid-west. But from a TV, media center, and conference potential perspective, I think it's the wrong direction. The DC to Boston corridor is an important focus. I also believe keeping a NYC home and a MSG post season are important to the conference's status.

I am also taking the 14 team perspective, ideally with an East and West balance. The best available non FBS programs are west.

If we agree with the early press that hoops excellence is the prime consideration, we target UConn and Temple as the best within the existing region. UConn is the premier hoops pedigree of the new league, a NYC draw, and an East Coast power.

Geography is more important than many appreciate for the non-rev sports. It is a huge benefit to travel within the Providence to GTown corridor. 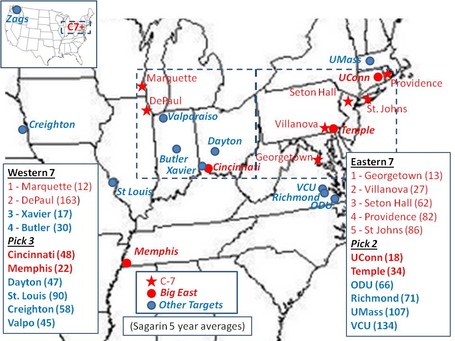 Here is a team-by-team look:

UConn (18). A large fan base. TV market: Hartford #30. Because of the large following, proximity, and success of the program, UConn can also lay claim to interest in the NYC market (#1). They are FBS for those football detractors (I am not one of them). Great geographic fit. Great fit for keeping a NYC/MSG base. Future success with coaching change a question. Historical Big East tie a plus.

Temple (34). A large fan base. TV market: Philly #4. FBS. Philly rival of Nova. I don't buy into the "splitting the market" arguments. Having an in town rival builds the interest and solidifies the market. Rivalries build interest. Especially for a large, #4, market. 2 games at WFC in a growing rivalry is a good thing. I'm on the side of showing Temple some brotherly love.

ODU, Richmond, VCU. I am not in favor of extending south. This is ACC territory and we will not get much benefit from these schools, and the C7+ won't get much traction in southern Virginia.

UMass (107). Fan Base: Medium. TV Market: Springfield #107. You can make a case that UMass is attractive as a BC alternative and has a tie to the #7 Boston market, but I don't think it's a good case. There is not enough success on the court to have a better fan base or a wider Boston appeal. Lots of grads in Boston though. UMass is an ok geographical fit. FBS.

Memphis (22). Fan Base: Large. TV Market: Memphis #48. Not a good geographic program, but the strength of the hoops program may warrant a stretch in their direction. Over rated due to the Calipari / sanctioned years? FBS (insert your own snide comment here).

Valpo (45). Fan Base: Small. TV Market: not well located. Far enough from Chicago to be less relevant, and too small a fan following to claim the big market. Professor Savagely has swayed me away from Valpo, although I respect that they have gotten it done on the court.

My current view: Make the invite to UConn, Cincy and Temple. Get the better basketball teams. They have incentives to be in a better hoops conference and have a better regional footprint for no revs. I love the opportunity to show Temple we can be inclusive without being under duress. These additions would solidify the Big East name, the MSG conference spot, and an east coast relevance.

I'll pass on Valpo out of my respect for Prof Savagely's mid-west sensibility. Too small.

Memphis has some uncertainty going forward. Over rated from the Calipari influence? It's a geographical stretch. Pass.

I'm taking St Louis. Buying into that they are a program on the rise and have a desired TV market that will benefit the conference in TV negotiations. They have invested. It trumps their lower rating on the court.

And I'll take Dayton over Creighton. They have been at least as good on the court and are a better regional fit.

If UConn, Temple, and Cincy pass on the invite, my Plan B would be to only go to 10 teams for now, as other adds don't have the stature of those 3 programs. We then likely lose the critical mass for MSG. Continue to assess and add as needed.

What are your thoughts? Did we miss some candidates that are more highly regarded than these candidates?