With Super Bowl Sunday approaching, the Villanova football program can look back at it's history of NFL players — with at least 109 players reaching the professional ranks.

Villanova has been sending football players to the pro's since the 1920s, with 109 players signing with NFL or pre-merger AFL teams. Since the Super Bowl launched in 1967, however, a number of Villanovans have had the privilege of participating in the sport's biggest game.

There were no Villanova football alumni that participated in the first two Super Bowls — neither of which was called "Super Bowl" at the time. The Green Bay Packers won both contests for the established NFL, but in 1969, the fledgling AFL's New York Jets took down the NFL's Baltimore Colts and proved to many that the AFL teams could compete with the senior circuit. That game, Super Bowl III was the only Super Bowl with a team that featured more than one Villanova alumnus on the roster.

In addition to the players listed below who actually played in the Super Bowl game, Ross Ventrone was also a member of the 2011 New England Patriots team that lost Super Bowl XLVI to the Giants, 21-7, in February 2012. The younger Ventrone brother did not appear in that game, however. Joe was a South Carolingian running back who attended Villanova in the early 1960s, helping the Wildcats win the 1960 Sun Bowl, knocking off Wichita State, 17-9. In that game, Joe shook off three tacklers to score on a 19-yard run, and accumulated 63 yards on just 8 carries to be named the MVP of the game. Performances like that in college caught the eyes of pro-scouts and he was drafted by both the NFL's Redskins and AFL's Denver Broncos in 1963 — he signed with the Broncos and went on to be named the 1963 AFL Rookie of the Year. In 1965, he was traded to the Buffalo Bills, where he was selected as an All-Star.

In the 1968 season, his pro career was coming to an end. He played in 10 games, accumulating 186 yards rushing and scored three touchdowns on 42 attempts. He was 4th on the team in rushing that season, but was eclipsed by Matt Snell and Emerson Boozer in the Jets' pecking order and didn't play in the Super Bowl.

Al Atkinson, meanwhile, was a fourth-year player on the '68 Jets team, and played in 12 games that season, earning a starting role at middle linebacker. He was selected as an AFL All-Star in 1968, establishing himself at the top of the Jets' depth chart. Defensive statistics weren't as well-kept in his era as they are now, but he grabbed two interceptions for the Jets for 24 yards that season, and had 21 in his career for 224 yards.

As a leader for the Jets' defense, Atkinson helped to hold the high-powered Colts' offense of the 1968 season to just a single score. The Colts had been a 20-point favorite prior to the game, and were considered one of the best teams in NFL history, they had averaged 28.7 points per game in 1968 and hadn't scored fewer than 16 all season. Atkinson's defense, however, had allowed fewer yards to opponents than any other in the AFL. 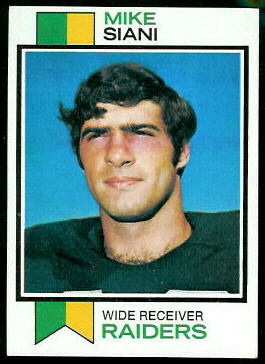 The 1977 Super Bowl featured the Wildcats' most recent first round draft pick, Mike Siani, who was picked 21st-overall by the Oakland Raiders in the 1972 NFL Draft. The 6-2 receiver was a standout at Villanova, impressing the Raiders and landing him a $22,000 contract in 1972.

Siani played for 9 seasons in the NFL, the first six of which were in Oakland, collecting over 26000 receiving yards, 17 touchdowns and 158 receptions.

In the 1976 season, Siani played in 14 games, caught 11 passes for 173 yards and two touchdowns. He wasn't a starter with the Raiders in the Super Bowl, however, but he did play, coming in off the sidelines to contribute to a 32-14 Raiders win over the Minnesota Vikings.

After the 1977 season, arguably his most successful as a professional, Siani joined the Baltimore Colts who suffered through three consecutive losing seasons in '78, '79 and '80.

Most recently, he coached the Richmond Raiders arena football team, leaving the staff at Princeton University, where he had served as the Quarterbacks and Wide Receivers coach in 2009. He had also served as a college scout for the New Orleans Saints in 2007 and 2008 and worked with arena football teams in Myrtle Beach, SC, Atlantic City, NJ, and Fayetteville, AR.

He has served as an outspoken advocate for retired NFL players of his era. When he retired from the pro circuit, he had no medical, dental or life insurance and received just $492 per month in benefits from the players association and works a second job in addition to his coaching gigs.

According to a 2006 Baltimore Sun report:

He agrees with Ditka that Upshaw -- his former teammate on the Raiders -- and the NFLPA haven't done enough for retired players.

"As all the former players do, I think that maybe Gene is saying, 'Just go away, don't rock my boat, I've got a good gig going and I want it to last.' I'm very disappointed with what he hasn't done for us," Siani said. 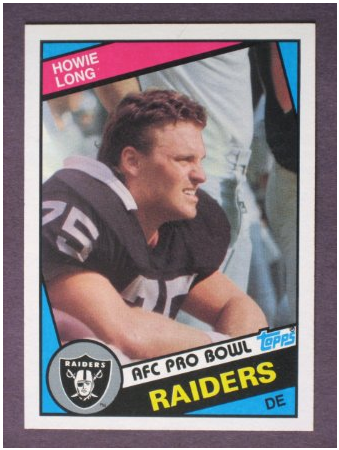 Probably Villanova's most recognizable alumnus in sports today, Howie Long, appears every Sunday on Fox Sports' coverage of the NFL. Before he moved to the broadcast booth (or did those Radio Shack commercials with Teri Hatcher), he had a 13-season Hall of Fame career with the Raiders.

After starring on defense for Villanova in the late-70s and 1980, Long was the second-round draft pick of the Oakland Raiders in 1981 (48th overall). He was also the Northern Collegiate boxing champion while at Villanova, and his toughness and athleticism helped propel his professional career.

Long was selected to the Pro Bowl eight times, starting with the 1983 season. He recorded 84 official career sacks from the left defensive end position and 7.5 more in 1981, before the sack was an official statistic.

Leading up to Super Bowl XVIII, he appeared in and started 16 games for the Raiders (based in Los Angeles starting a year after Long was drafted until the end of his career), and recording 13 sacks, the highest single-season total of his career, including a high of five sacks in a single game against the Redskins.

In the Super Bowl, he recorded 5 tackles and led the Raiders defense in holding the Redskins to just 9 points in a 38-9 victory.

He told Football Digest in 1986 that he wanted "Financial security, and I want to be in the Hall of Fame...That's my goal...and I'd like to win a few more Super Bowls." Two of the three goals would be realized, as Long was able to parlay his NFL career into valuable endorsements, acting gigs, and his broadcasting career. 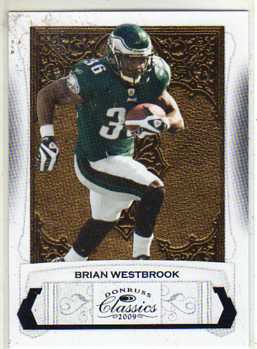 Philadelphians certainly remember the 2005 Super Bowl, when an Eagles team starring Terrell Owens, Donovan McNabb and Villanova alumnus Brian Westbrook rode through the playoffs to earn a spot facing the dynasty New England Patriots for the title. It was a major moment for the Eagles, but the team fell short in the game, allowing the Patriots to become the first team to win consecutive Super Bowls since the 1998 Denver Broncos.

The Eagles were making just their second appearance in the title game in franchise history.

Westbrook joined the Eagles in 2002, after having been drafted 91st overall in the third round after a dominating career on the Main Line. He was the first Villanova football player to be drafted since Howie Long, and the highest pick of the FCS era until the Colts used a second-round pick on OL Ben Ijalana in 2010.

At Villanova he broke most of the school's rushing records and set an NCAA record with 9,512 all-purpose yards in his career. He scored 542 points with 84 touchdowns, carried the ball 725 times for 4,298 yards (6.2 avg.), caught 219 passes for 2,582 yards (11.79 avg.) and gained 2,289 yards and four touchdowns on kickoff returns. He was the first player in college football at any level to gain 1,000 yards both rushing and receiving in a single season.

Though the Eagles were a pass-first team under Andy Reid, in 2004 Westbrook managed to accumulate 812 rushing yards and three touchdowns that season, on the ground. The dual-threat player, however, was a perfect fit for the pass-happy offense, and led all NFL running backs with 73 receptions for 706 yards and 6 touchdowns.

In the title game, he rushed for 44 yards, caught seven passes for 60 yards, and scored a touchdown.

He would go on to play for the Eagles, primarily as a starter, until an injury-shortened 2009 season caused the team to release him from his contract. In 2010, he would sign with the San Francisco 49ers to back up Frank Gore. His lone highlight that season was a 23-carry, 136-yard performance against the Cardinals after Gore was injured early in the game.

He did not play in 2011 and made his retirement official prior to the start of the 2012 season, signing a one-day contract to retire as a member of the Philadelphia Eagles.

If you blinked, you missed him, but Villanova alumnus Ray Ventrone was a member of the New England Patriots during their bid for a perfect season in 2007, which culminated in Super Bowl XLII. The Patriots weren't the victors in that game, with the New York Giants seemingly stealing the title, 17-14.

At Villanova, he was the hard-hitting safety who was often barred from making contact during practices to avoid injuring his teammates. He finished his college career with 251 tackles, two sacks, and five forced fumbles.

Ventrone went undrafted after college, though the Patriots had considered selecting him with the last pick of the draft — which would have earned him the title of "Mr. Irrelevant." Instead of drafting him, the Pats reached out and were able to sign him as a free agent after the draft. He spent most of 2005 on the Patriots practice squad and sat out the 2006 season with an injury.

At the start of the 2007 NFL season, Ventrone was signed by the New York Jets, where former Patriots defensive coordinator Eric Mangini had become head coach. The Jets kept Ventrone for most of their training camp, signing him to the practice squad before the start of the regular season. Ventrone would stay on the practice squad until September 12, when he was released by the New York team.

Less than a week later, he would re-join the Patriots as a practice player for the Patriots. The team eventually elevated him to the active roster in November, and again in December, where he remained through the Super Bowl.

During the 2008 Super Bowl, Ventrone contributed on the field for the Patriots, recording his first NFL tackle.

He now has 50 NFL tackles as a professional and signed with the Cleveland Browns in 2009. One year later, he signed a three-year, $2.2 million extension.