New Big East announcement coming tomorrow; Lots of ducks to be lined up

A release announcing a media event at the News Corp building in Manhattan has the Big East poised to publicly settle three major items of business tomorrow morning.

Share All sharing options for: New Big East announcement coming tomorrow; Lots of ducks to be lined up

The new Big East will hold a press conference tomorrow morning at News Corp's headquarters in Manhattan -- in Fox News' Studio D (News Corp is the holding company that currently owns the Fox networks (thought the television businesses will be spun off soon into a separate entity). The location of the press conference suggests that the details of the leagues' television deal with the Fox Sports Network(s) will be at least one subject of the announcement, but there appears to be more news than that coming down the pipeline.

The television deal has been reported to be as much as $40 million per year for the league that will expand to 10 schools next season. Each school can expect a pay-out of just under $4 million annually.

Joel Fisher, the Executive Vice President for Madison Square Garden, will also attend the press conference, and a long-term agreement between the schools and the arena is also expected to be announced during the meeting. The term of that agreement hasn't been leaked, however, but it appears that, despite some ACC interest in the arena, the Catholic 7 schools moved quickly to circle their wagons around the venue they have called home each March since the early-1980s.

The ACC could still attempt to bring their tournament to the city, but that would mean finding an alternative venue, or an alternative timing for the event.

The Catholic 7/Big East described the announcements as, "milestone events" for the fledgling conference that has yet to hire a commissioner.

They were also expected to announce the identities of their new membership for next season by Wednesday, and that appears to be on track. Emails went out at both Xavier University and Creighton University to season ticket holders or students and alumni promising announcements about the future of their athletic programs to come tomorrow morning. Xavier's email cited 10:45am (Eastern), while Creighton's email cited 10:00am (Central) -- the difference in time-zones means that Xavier's announcement should happen just 15 minutes ahead of the Creighton announcement.

Butler is also expected to announce a move from the Atlantic 10 to the new league. Jumping after just one season in the A10.

All three new schools will join Villanova, Providence, Seton Hall, Marquette, Georgetown, St. John's and DePaul in founding the new Big East conference this summer, and they will begin play in all sports for the 2013-14 season.

Once these moves are announced, the league will have settled most of its major moves, with hiring a commissioner and league staff, finding a location for a league office and working out logistics for various leagues within the conference the other vital tasks that remain. 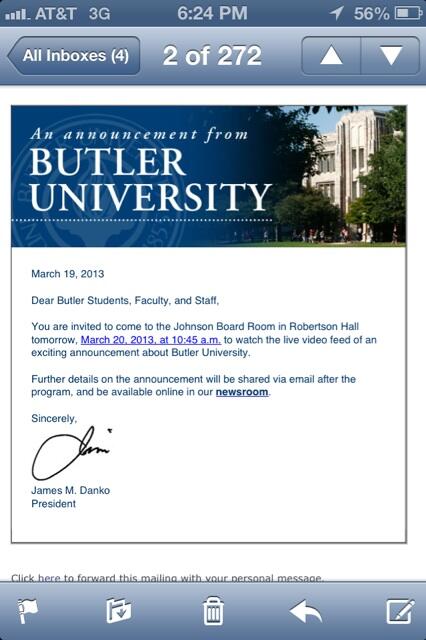 It appears likely that the presidents of the three new universities will appear with the Catholic 7 presidents at tomorrow's press conference, with the live video feed of the event streamed to each campus.