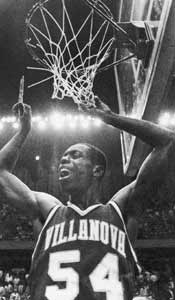 One of most epic players in 'Nova Basketball, Ed Pinckney is celebrating his 50th birthday today!

As a senior, Pinckney scored 16 points and pulled down 6 rebounds helping lead the Wildcats to the 1985 NCAA National Championship over Georgetown (and was named the Tournament's Most Outstanding Player).

Happy Birthday to one of Villanova's Greats!

What is your most favorite EZ-Ed moment?