Wisdom of Crowds Review – Those Who Exceeded Our Expectations

“Winning teams require a measure of confidence that would strike many as absurd, unfounded, and downright irrational. They believe in themselves utterly, without question, even when everyone else is questioning how good they are.” ~ John Eliot

Share All sharing options for: Wisdom of Crowds Review – Those Who Exceeded Our Expectations

Expectations could not have been lower coming off a dreadful 13-19 season, with Maalik Wayns, Dominic Cheek, Markus Kennedy, and Ty Johnson gone and questions swirling about the four scholarship players who would take their place. Add to that the coaching staff was under fire after three sub-par seasons and team leadership was in question. Big East coaches were generally unimpressed with the team’s prospects, picking them to finish near the bottom of the conference. Nova Nation braced for another tough year and silently prayed for an NIT post season invitation.

With expectations so low, we were treated to a surprising 20-14 (10-8 conference) season and a return to the Big Dance after a one-year hiatus. While frustrating to watch at times, this team was no longer unwatchable. Poor ball handling, passing, shot selection, perimeter defense were familiar bad habits carried over from last season, yet this team showed us things we had not seen in recent years – quiet confidence, playing hard for 40 minutes, never giving up, and playing for the name on the front of their jerseys. Mouph Yarou stepped up as the best leader we have seen since Dwayne Anderson. Jay Wright presided over three wins against top-five teams and was in the conversation for Big East Coach of the Year honors.

So while the opening round loss to a very beatable North Carolina team may have stung, the extent to which this team overachieved provided a soothing balm. We can once again look forward to next season with anticipation and optimism.

Over the coming weeks, we will be taking a look back at the season that was, comparing actual results against expectations and projecting what might be for next year. To get started, we take a look at our Wisdom of Crowds scoring predictions for each player. Not surprisingly, with so many additions to the squad and returning players taking on bigger roles, our predictions were the least accurate of the four seasons we have conducted Wisdom of Crowds polling.

Today’s post focuses on the players who exceeded our scoring expectations.

While frustrating to watch at times, Hilliard was our biggest scoring surprise on this year’s squad. We predicted he would score only 5.6 PPG, but he scored that many points in the first half alone, averaging 11.4 PPG per contest (up from 9.7 in OOC play). He was third on the team in scoring average and three pointers made and was selected as Oscar Robertson National Player of the Week in January after leading the Wildcats to wins over Syracuse and Louisville, then both ranked among the top five. Against Syracuse, he scored a season-high 25 points and added career highs in rebounds (7) and assists (6) while not committing a turnover.

Over the course of the season, he scored 10 or more points 19 times and more than 20 points three times. His season low was 3 points in the win at home against South Florida. Villanova won 68% of its games when Hilliard scored 10 or more, and only 47% when he scored 9 or less. Hilliard had a tendency to disappear at times and his scoring was the second most erratic on the team (standard deviation of 5.5) behind only freshman PG Ryan Arcidiacono (see histogram below). As a three star recruit out of high school, Hilliard is, perhaps, the type of player Jay Wright should seek out more often – one flying under the radar screen but with the tools to develop into a solid four-year player. 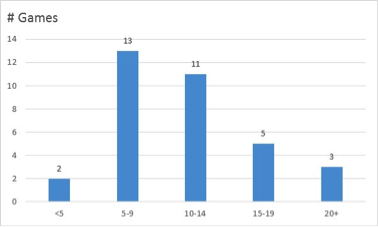 Uncertain what we would get after a year off following back surgery, we predicted Ryan would score 8.1 PPG. He far exceeded our expectations by scoring 11.9 PPG (up from 11.5 PPG in OOC play). He was second in points scored (405) and free throws (122) and led the team in 3PT shots made (71) and assists (119). However, he also had the most turnovers (96) on the team. Arcidiacono was named the Big East Rookie of the Week three times and selected to the All-Rookie Team. He scored a season-high 32 points in his Big East debut against St. John’s on the strength of seven made three-pointers.

Over the course of the season, he scored ten or more points 20 times and more than 20 points five times. His season low was 3 points in the win at home against South Florida. Villanova won 70% of its games when Arcidiacono scored ten or more, and only 43% when he scored nine or less. Arcidiacono was the most inconsistent scorer on the team (6.9 standard deviation), as illustrated in the graph below; his high-scoring games were often followed by a significant drop-off in his offensive output in his next game.

We predicted JVP would score 12.5 PPG, but he has scored a tad more at 13.3 PPG (up from 12.2 PPG in OOC play). He was a match-up nightmare for most teams, too quick to be defended by a power forward and too strong to be defended by a wing. He had an uncanny ability to draw fouls in the paint and got to the free-throw line a team leading 241 times. He led the team in scoring (453), field goals (136) and free throws (171), but also committed the second most turnovers (86), behind only Arcidiacono. He scored a season-high 26 points in his Big East debut against St. John’s.

Over the course of the season, he scored ten or more points 28 times and more than 20 points five times. His season low was 5 points in the home loss to Temple. Villanova won 75% of its games when Pinkston scored between 10 and 16 points, but only 36% of the time when his scoring was above or below that range, as shown in the table below. Pinkston was unquestionably the go-to player on this year’s squad and the team always seemed to play better when the offense ran through him. His fine play this season was acknowledged by being selected on the All-Big East Third Team.