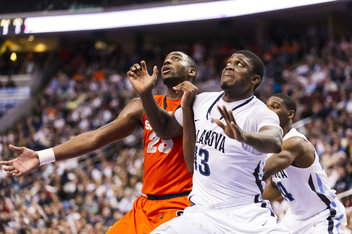 Graduating senior Mouphtaou Yarou who captained the 2012-13 Villanova Basketball team was only able to score 2 points in 19 minutes played in a semifinal game in the Portsmouth Invitational Tournament on Friday. However, the 6'10" big man was able to grab 10 boards.

Yarou's bucket was on 1-6 shooting. He also tallied 2 blocked shots as his K&D Round's Landscaping team won and will advance to Saturday's Championship game.