Wisdom of Crowds Review – Those Who Met Our Expectations

Share All sharing options for: Wisdom of Crowds Review – Those Who Met Our Expectations

This is the second part in our series looking back to see how our Wisdom of Crowds scoring predictions for each player compared with their actual scoring during the recently completed season. Today’s post focuses on the players whose scoring came very close to our predictions.

We predicted Ach would score 2.9 PPG and that’s exactly what he did (although his scoring was down significantly from 4.5 PPG in OOC play). He scored a season-high 13 points in the win over UPenn, the only time he scored in double digits.

Over the course of the season, he scored less than five points 23 times and five or more points eight times. However, the real story for the former New York State Player of the Year was the mysterious drop-off in minutes in conference play, as shown in the chart below (courtesy of Statsheet.com). Yacoubou’s limited playing time (12 minutes per game) belied the fact that he was one of the better shooters as well as a strong defender and rebounder. He had the highest eFG% on the team (55%), and his 41.8% FG% and 39.6% 3pt FG% were better than James Bell (40.1%/36.4%), Darrun Hilliard (40.3%/31.5%) and Ryan Arcidiacono (34.3%/32.7%). Hopefully Ach will emerge next season as the next coming of Dwayne Anderson, but the smart money says he’s the player most likely to transfer in search of increased playing time. 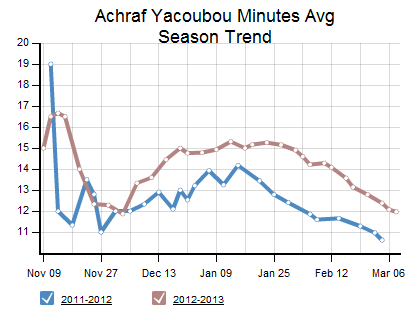 We predicted Taj would score 8.7 PPG and he was just a tad short of that mark at 8.6 PPG (down significantly from 10.7 PPG in OOC play). He scored a season-high 19 points in the second game of the season against Marshall and had his worst offensive game against Marquette when he failed to score.

Over the course of the season, he scored less than ten points 21 times and ten or more points 13 times. Perhaps more than any other player, Villanova won when Bell had a good offensive game, winning 85% of the time when he scored ten or more. He was second on the team in 3PT field goals (56) and third on the team in eFG% (51.6%) behind Yacoubou and Sutton. He has become one of the most consistent shooters on the team as shown in the chart below (courtesy of Statsheet.com). However, his offensive game was typically quiet in the first half of games. Bell had the third-most turnovers (67) due to his poor handle and passing and led the team in personal fouls (97). 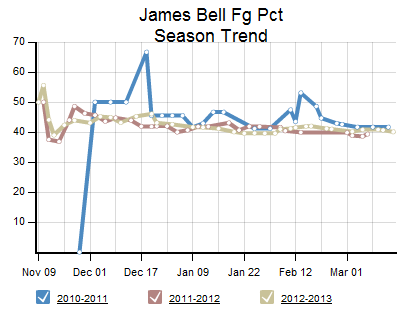 We predicted Daniel would score 4.3 PPG, but he has scored only 3.5 PPG (up slightly from 3.2 OOC). He scored a season-high 12 points in January at South Florida and did not score in seven games – Alabama, UPenn, Temple, UConn, Seton Hall, Pitt and North Carolina.

Over the course of the season, he scored less than five points 23 times and five or more points 11 times. Villanova won 89% of its games when Ochefu scored 6 or more points but only 48% of its games when he scored less. Playing only 17.5 MPG, Ochefu led the team in blocked shots (23) was third on the team in offensive rebounds (58) and fourth in FG% (45.5%). With Mouph graduating, the Cats hope for increased low-post scoring from Ochefu next season.