The Villanova women have won the Distance Medley at the Penn Relays for the second consecutive year. 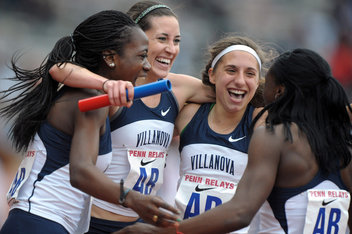 When the watches and pinwheel were awarded to the foursome, it was presented by Villanovans Vicki Huber and Michelle Bennett, were members of the 1988 DMR squad that owns the Relays' record.

It's the twelvth time, Villanova has won the event.

In other Villanova news at The Relays, Junior Samantha Yeats won the college section of the high jump and sophomore sprinter Faith Dismuke finished 5th in the 400 meter hurdles; it with Villanova's fastest time for the event in 6 years.