The Economics of College Basketball: Do Coaches Earn Their Pay?

College Coaches are exceptionally well paid by almost any standard, but some provide a more compelling value proposition than others.

Share All sharing options for: The Economics of College Basketball: Do Coaches Earn Their Pay?

Last week, USA Today published a list of the salaries of 62 of the head coaches participating in the 2013 NCAA men’s basketball tournament. The numbers were, frankly, shocking. Their average pay is $1.47 million, ranging from Florida Gulf Coast’s Andrew Enfield’s at $157,500 to the high water mark of Duke’s Mike Krzyzewski at $7,233,976. Villanova’s Jay Wright was tenth on the list at $2,290,346, a tidy sum that covers coaching duties and weekly radio and television appearances. Louisville’s Rick Pitino is the only coach to reach the Final Four who earned more than Coach Wright, a whopping $4,078,327 annually on a contract that extends through 2022. Syracuse’s Jim Boeheim ($1,905,576), Michigan’s John Beilein ($1,800,000) and Wichita State’s Gregg Marshall ($1,155,000) all earned less than Coach Wright.

The USA Today article considered whether paying head basketball and football coaches the highest salaries on campus is consistent with the educational mission of our universities. While an interesting question, I was more interested in a different angle – is the relative compensation of the 62 coaches rational? That is, does it make sense that Andrew Enfield would need to work 46 years at his Florida Gulf Coast salary to earn the equivalent of what Mike Krzyzewski earns in a single year at Duke?

A 2008 article in the New York Times observed that "the escalating salaries of college football and basketball coaches has less to do with wins and losses than with so-called incremental revenue." That is, the coaches who get the big bucks are the ones that can drive significant revenue growth for their schools. Tennessee’s then basketball coach, Bruce Pearl was offered as an example. Prior to Pearl’s hiring in 2005, "Tennessee men's basketball concession revenue was a little more than $200,000. Two years into Pearl’s reign, concession revenue increased more than five-fold to $1.1 million. When Pearl arrived, there was only $2 million pledged toward the $16 million needed to build a new practice facility and only five of the 26 planned new luxury suites in Thompson-Boling Arena were committed. One year after Pearl joined, all 21 of the remaining luxury suites were sold and 12 more were added. The money pledged for the practice facility ballooned to $24 million. The average crowd of 13,000 grew to 20,000."

So the case can be made that university presidents are acting rationally by paying top dollar for rain-maker coaches. However, that argument holds less sway for the average fan, who is mostly concerned with wins and losses. The sentiment among VUHoops reader seems to be a bit more specific -- can the coach consistently deliver teams that hear their name called on Selection Sunday and win games in late March and early April? Of course, considerations other than winning deserve consideration in evaluating the relative value proposition of a coach, things like running a clean program (think John Calipari) and projecting a positive image for their university (think Mike Rice). But if all we needed was a nice guy with a pretty face who follows the rules, I have it on good authority that several VUHoops readers could be had for half of Jay's asking price.

Since all we really care about is winning games in the Big Dance, I recast USA Today’s list in terms of the value proposition delivered by the coaches. To do that, I tallied the compensation paid to each coach over the past five year and divided that sum by the number of games played in the NCAA tournament over that period. While one might argue that I should have weighted a second-round win more than a first round win, a third-round win more than a second round win and so on, I chose the path of elegant simplicity. Further, if coach served less than 5 years at his current university, I considered only his pay and NCAA tourney games played over his tenure in his current post.

Over five years, Villanova paid Jay Wright approximately $11.5 million (making the leap of faith that Jay's annual compensation was unchanged over the period), during which time he led Villanova to the NCAA tournament four times. On the strength of Villanova’s deep run in the 2009 tourney, Villanova played in a total of nine NCAA tournament games in those tournaments. Accordingly, Villanova paid him $1.27 million per NCAA game played during the five-year period. The results for most of the coaches on the USA Today list (and a couple other coaches that did not make this year’s NCAA tournament) are listed in the chart below in order of least compelling value proposition to the most compelling. 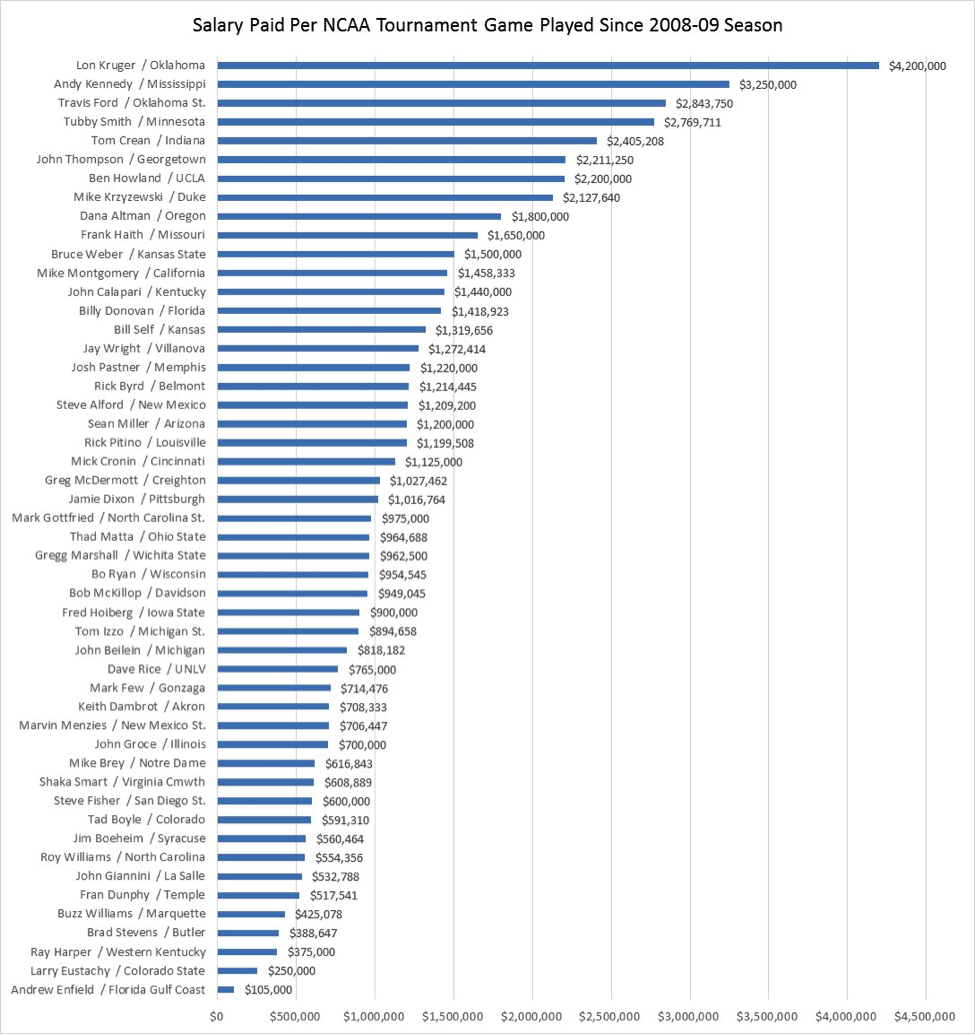 The chart highlights some interesting value propositions. While Mike Kryzewski’s $7.2 million salary is, by far, the highest on the planet for college coaches, he has played in 17 NCAA tournament games over the past five years (second only to Tom Izzo and Billy Donovan with 18 each), meaning that Duke paid Coach K the equivalent of $2.1 million per NCAA tournament game played. Minnesota’s Tubby Smith played in only 4 NCAA tournament games over five years, the equivalent of $2.8 million per game. Is it any wonder that Tubby is now looking for work? Oklahoma’s Lon Kruger has played in only one NCAA tournament game over his two year tenure at the school, topping our list at $4.2 million paid per tournament game played. Lon might want to spend the off season brushing up his resume. Florida Gulf Coast’s Andrew Enfield offered the best value proposition of all of the coaches, playing three NCAA tournament games over his two year tenure for a cost of $105,000 per game played. Is it any wonder that Enfield was snatched up by USC for a six-fold increase in salary? Finally, Jay Wright’s $2.3 million salary is a bit less grand when expressed as salary per NCAA game played of $1.27 million, representing a better value proposition than seventeen big-name coaches including John Thompson, Mike Kryzewski, John Calipari, Billy Donovan and Bill Self.