It was a great week for Villanova recruiting, but the Cat’s 2014 hoops cupboard still lays bare.

Share All sharing options for: Villanova Week In Review - June 22

Summer Assignment: Stronger and Quicker ... Andrew Albert of the Philadelphia Daily News writes, "Ryan Arcidiacono was one of 16 finalists selected to compete for a spot on the USA Basketball under-19 World Championship roster, but in the end, he was not among the 12 players selected. He went through the same process last year for the under-18 team, making it to the next-to-last cut. This year was more encouraging, though, as he made it farther along in the process. He acknowledges that he knows he has to work harder to get his game on the level he wants it to be at for next season. "I'm working on my entire game," he said. "Pretty much everything. All the coaches have some stuff for me to work on. I'm trying to get in the weight room a little more, get a little bit faster and stronger and quicker. "He said the experience that he went through in Colorado will continue to inspire, and push him in the offseason to get better, and get ready for next season."

What Was Jay Thinking?

Great to have @CoreyStokes24 working with us this week at #Villanova Basketball Camp! pic.twitter.com/ZivA0ZK0RN

Big East's Most Underrated Team? ... Trevor Lowry of RantSports writes, "Villanova could very well be one of the most underrated teams in the Big East entering the 2013-14 college basketball season. The Wildcats are coming off of a 20-win season and they should win even more in the upcoming season. Finishing in the top three of the conference may be bold, but possible." 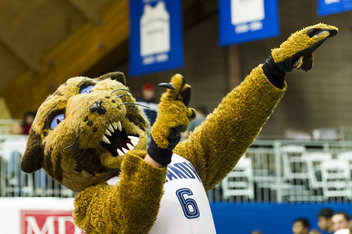 Yes from Big ... Kevin Minnick of the Courier-Post writes, "Tim Delaney, a 6-9 standout power forward on the Pitman High School had received calls from more than three dozen schools including Florida, Vanderbilt, Georgia Tech. With the recruiting process taking on a life of its own, Delaney decided it was time to make a decision. He made a verbal commitment Wednesday to attend Villanova. "I just had this feeling in my gut. I felt Villanova would be a good place for me," said Delaney, who already has 1,150 career points and more than 500 career rebounds. I fit in really well at Villanova with the players and especially the coaching staff." Said Pitman coach Kevin Crawford. "When he went up to Villanova, they rolled the red carpet out for him. They showed him exactly where he'd fit in and that they would build around him. Delaney averaged 21 points, 11 rebounds and three blocks last season in helping Pitman (24-6) reach the South Jersey Group 1 final. "I'm working on improving my quickness and perimeter defense," he said. "I need to be more decisive with my low-post moves and, as always, I'll work on my jump shot." Delaney is the top-ranked student in his graduating class."

Ja'Quan Newton Impresses and Still Likes Cats ... Jeff Borzello of CBS Sports writes, [Villanova target] "JaQuan Newton has always been one of the toughest players to keep out of the lane from the class of 2014, capable of getting past his defender and finishing at the rim on a consistent basis. The only school to which he has taken an unofficial visit is Villanova. "I like Villanova a lot," Newton said. "I like the way they play, I like the coaching staff, and I also like their facilities. Don't expect a decision soon, though. Franklyn Calle of SlamOnline adds, "Ja'Quan was one of the players who impressed me most at the prestigious NBPA Top 100 Camp this week. He put on a clinic on attacking the basket with his explosive drives and repeatedly split the defense. If the MVP vote had to be done based on the championship game, Newton would have been the obvious choice after dropping 31 points, 7 assists and 4 rebounds. Zach Fleer of Scarberrymedia.com adds, "Ja'Quan Newton was far and away the best player on the floor in Saturday's championship game, Matched up with Kansas target Josh Perkins, Newton attracted two, sometimes three defenders every time he touched the bal . Newton's decision-making on the offensive end was most impressive as he continually found open teammates and made the correct play.

Just Want to be Free ... Jeff Borzello of CBS Sports writes, "Four years ago, top-60 power forward [and Villanova target] Ben Bentil wasn't even playing basketball. Now, Bentil has emerged as a four-star prospect out of St. Andrew's (Del.) and is only getting better."It's a new sport to me," Bentil said. "I just wanted experience. Get more new moves, get to play with the best players in the country." He said he doesn't pay too much attention to his recruitment, choosing to focus instead on his education. With that said, Bentil did say he wants to take trips to UCLA and Georgetown.He has his main decision criteria mapped out already. "First of all, my education," Bentil said. "Somewhere that's going to let me play. Somewhere I won't get restricted, kind of like enclosed in a cave. I just want to be free, play, and I like to win."

Add Crean to List of Coaches Pining for Booth ... Alex Schwartz of Northstar Basketball reports, [Villanova target] "Phil Booth of Mount St. Joseph (MD) is one of the better backcourt players in the nation in the class of 2014. A 6-foot-3, 185-pound combo guard, Booth was at the NBPA Top 100 Camp at the University of Virginia. The rising senior listed scholarship offers from Indiana, Villanova, Georgetown, Maryland, Virginia Tech, Temple, Seton Hall, and Iowa." Justin Albers of InsidetheHall writes, "Indiana has been recruiting Phil Booth hard for over a year now, and the Hoosiers have shown no signs of letting up. "It's been pretty heavy lately," Booth said. "It's still up in the air, but I'll definitely make a visit before next year starts." Booth, said he also plans to take return visits to both Maryland and Villanova in the coming months. When asked what coaches he has the best relationship with, Booth mentioned Villanova's Jay Wright and Maryland's Mark Turgeon. Perhaps the most newsworthy note to come out of Top 100 Camp was the fact that Booth hopes to play point guard at the next level. The 6-foot-3 Booth has always played both backcourt positions. Booth said he will commit in the fall, but he hasn't yet targeted a specific month."

Easy Ed Still in the Hunt ... Aggrey Sam of CSNBullsInsider reports, "Bulls assistant coach Ed Pinckney will have a second interview for the Grizzlies' head-coaching vacancy Wednesday in Memphis, CSNChicago.com has learned. Pinckney initially interviewed with Grizzlies CEO Jason Levien last week in New York and according to a person with knowledge of the situation, the initial discussions went well enough that Memphis believes the former Villanova star's candidacy warrants further review. While he's more under-the-radar than many of the coaches vying for jobs in what's already been a tumultuous coaching carousel, Pinckney is highly regarded for his ability to communicate with players and skill-development work."

Hail Szczur ... The Press of Atlantic City reports, "Former Villanova two-sport star, Matt Szczur of the Tennessee Smokies (Cubs) in the double-A Southern League was 1-for-5 with a double and an RBI in a 7-2 win over Chattanooga. Szczur is hitting .290 with 38 runs scored, 29 RBIs and 15 stolen bases in 66 games,"

Tally Lands Nose Guard ... Andrew Marcus of The Reporter writes, "Souderton's 6-2, 290-pounder football standout, Rick Young, received his first offer from his top-choice, Villanova, and it did not take him long to verbally commit. "The school just felt right and it was where I wanted to go," Young said. "I really like the coaching staff and players at Villanova. I wanted to go somewhere where I felt like I fit in. "He had over 30 schools inquire about him and a bunch really followed up with me," Indians coach Ed Gallagher said. "I think he wanted to stay around here and Villanova offers the best of everything. It's a place where he will get to play football and feel comfortable. Villanova wants him to play nose guard, but he is very talented and has the ability to play both (offense and defense). Rick has the size schools are looking for, but he also moves really well. Young also received interest from Lehigh, Lafayette and Temple, but the Wildcats were the perfect fit."

Wildcats Honored ... Villanova.com reports, "Senior shortstop Tyler Sciacca has been named to the Rawlings/ABCA All-East Region second team Sciacca was the leading hitter for Villanova this season and led the team in several offensive categories. He batted .307 for the season while posting a .405 on-base percentage and a .466 slugging percentage, all team highs. Sciacca also led the team with 36 runs batted in, as well as with 18 doubles and two triples. Villanova also had three student-athletes awarded the Big East Scholar-Athlete Sport Excellence Awards by the conference office for their success in competition, academic achievements and involvement in the community --Junior track & field athlete Samuel Ellison, senior golfer Michael Kania and senior cross country runner Alex Tully.

Cook Tries Tri ...Villanova Running reports, "Villanova's Summer Cook, who has competed at a high level in both swimming and track/cross country for the Wildcats, has been targeted by USA Triathlon as a part of its Collegiate Recruiting Program and is departing tomorrow for the Olympic Training Center in Colorado Springs for a summer of intensive triathlon training. Cook, a Colorado native who started her Villanova career exclusively as a swimmer but who later returned to track and cross country was named to the 2013 All Big East Conference and All Mid-Atlantic Region teams in cross country.

Ms. Commissioner? ... NBC Sports' Raphielle Johnson writes, "According to a report from Andy Katz of ESPN.com, former WNBA president Val Ackerman has emerged as the frontrunner to be named Big East commissioner. People close to the process are currently unsure as to whether or not she would accept the position if offered. Athletic directors and coaches have been kept in the dark as the presidents have run the search. If Ackerman were to accept the position, the Big East would have a leadership figure who is highly respected in basketball circles at all levels of the game according to Katz's report.

Major Setback for Hoyas ... Terrence Payne of NBC Sports writes, "The return of Greg Whittington was going to be a crucial for the Georgetown Hoyas, entering next season without Big East Player of the Year Otto Porter. However, on Tuesday it was confirmed that Whittington has suffered a torn ACL in his left knee. At this point, there is no specific timetable for his return."

Villanova Crime Blotter ... Associated Press reports that "police in suburban Philadelphia say three men are in custody in connection with a bank robbery that forced lockdowns at Villanova University and Rosemont College. It started when police say the suspects staged a holdup at a bank in Lower Pottsgrove around 2:50 p.m. Wednesday. Investigators say the suspects fled in a silver sedan that was spotted near Interstate 76 by an Upper Merion police officer on his way to work. Authorities say a chase ensued and several police departments were involved as officers fanned out across the area in search of the suspects. Police say the suspects abandoned their vehicle, but were arrested after a foot chase."