The former WNBA chief will take on the challenge of leading the high profile conference as it enters its first season.

A Bloomberg report claims that the Big East conference and Val Ackerman have agreed on termsto make the former NBA executive and president of the WNBA the first commissioner of the "rebooted" Big East conference. The 53-year old executive has not yet officially signed a contract with the league, but the ink could be dry in time for the conference's official July 1 birthdate.

"The Big East is incredibly fortunate to have Val Ackerman lead us into this exciting new chapter for our conference," said Rev. Brian J. Shanley, O.P., President of Providence College in a statement. "Val is exactly what the Big East needs - she embodies the highest personal and professional values of the sports industry, and is a hard-charging and innovative leader who can shepherd the conference to continued success."

"Val has achieved great success within every element of the sports business industry," Georgetown President John DeGioia added. "With the psyche of a former Division I athlete, she has marshaled operations that directly resulted in elite levels of play, lucrative sponsorship deals, and lasting partnerships. We are thrilled to welcome her to the Big East."

She will join the Atlantic 10's Bernadette McGlade and the Ivy League's Robin Harris as female conference commissioners. The Big East's 10 school presidents hope that Ackerman will be leading a much more high-profile conference than her female peers, however.

"Val Ackerman has worked alongside college presidents, commissioners, coaches, athletic directors, players, sponsors, broadcasters and the heads of many sports governing bodies to improve the world of amateur athletics," said Xavier University Athletic Director Greg Christopher. "As the new Big East gets started, long-range vision is our top priority. Val's experience stands out on that front, and she will provide strong leadership in the future. I look forward to working with Val to build the Big East into a preeminent Division 1 conference." 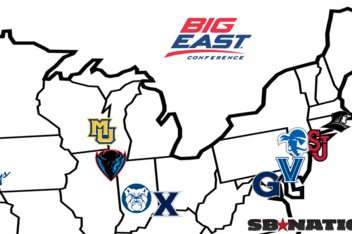 "I am honored to be given this incredible opportunity to work in partnership with the ten world-class institutions that are marching ahead under the Big East banner," Ackerman stated. "Our mission is simple - to continue and enhance the Big East's legacy of intense competition, spirited rivalries and unparalleled achievement, not only in college basketball, but in all intercollegiate sports."

NBA commissioner David Stern told Bloomberg, "She brings all of that experience with intelligence, a keen analytical ability, an intense work ethic and a winning management style."

Villanova University men's basketball coach Jay Wright was pleased with the hire, noting, "Val possesses an unparalleled understanding of the sport of basketball and knows from experience what it takes to operate a successful league. Her work with the NBA, USA Basketball, NCAA, and WNBA will be a great asset to our conference. We're excited to welcome Val to the Big East."

A New Jersey native, Ackerman played basketball at the University of Virginia, where she earned her bachelor's degree. She went on to play professionally in France for one season (earning just $800 per month), before returning to the United States to pursue a law degree from UCLA.

Professionally, she practiced law for two years at the white shoe law firm, Simpson Thatcher & Bartlett, eventually leaving to join the NBA as in-house counsel. She also served as a special assistant to the NBA Commissioner, and eventually was appointed director of business affairs and vice president of business affairs. In 1996, she was appointed to become the first president of the WNBA, a position she held until 2005.

She was instrumental in helping David Stern to create and sell his vision for professional women's basketball to the NBA ownership. According to Sports Business Daily:

"She was the master of execution and detail," Stern said of Ackerman's approach in launching the eight-team WNBA in 1997.

"It was interesting to watch the owners' reactions," [former league exec Gary] Stevenson said. "It could put 20 new dates in their buildings in the summer and develop a brand new set of fans, because 90 percent of the WNBA fans were separate from NBA fans."

She was also instrumental in building a successful USA Basketball women's senior national team that won Gold at the 1996 Atlanta Olympics.

After stepping down from the WNBA in 2005, she served as the president of USA Basketball until 2008, a tenure which culminated in both men's and women's gold medals at the Beijing Olympics. A 2011 inductee into the Women's Basketball Hall of Fame, she has since served on that organization's board, as well as the board of governors of the Naismith Memorial Basketball Hall of Fame, the Knight Commission on Intercollegiate Athletics, FIBA and the Virginia Athletics Foundation.

Most recently, she produced a report to the NCAA on the future of Women's basketball. Serving as a consultant with the governing body since November, her examination proposed a number of tweaks and changes designed to make the women's game more successful, from changing the tournament format, to cutting scholarships from 15 to 13, along with rules changes to make the game more exciting.

This news is breaking just six days before the entity is set to become recognized as an official NCAA Division I conference. She currently lives in New York City, where the Big East has announced it will make its new headquarters.