Now that the college season has been over for 2 months, it’s time to start talking about meaningless stuff that barely has to do with Villanova basketball, because there is literally nothing else to talk about. This week’s topic is the horrible alternate uniforms that Villanova wore this season to take a break from the traditional home and away jerseys.

Like most fans, I thought the jerseys looked like a Nike exec gave his drunk 4th grader free range to start gluing numbers to an old Nova Nation tee. After seeing Villanova go 1-3 in them this season, I was more convinced than ever that these jerseys were no good, and that no parent should ever allow their 4th grader to drink, whether arts & crafts are involved or not. 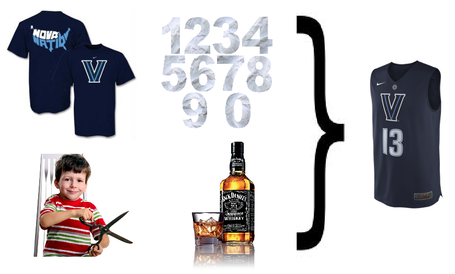 Armed with the Nike website uniform designing tool, one semester of Photoshop, and a six pack of Mike’s Hard Lemonade, I set out to deliver a better alternate jersey to the Wildcats.

I give you "9 Increasingly Bad Ideas for New Villanova Alternate Jerseys":

In the Villanova logo and uniform, Light Blue has been Navy Blue’s hot girlfriend ever since Navy wised up and dumped Maroon back in the early 2000’s. Light Blue has been hanging on Navy Blue’s arm for years, adding flair to his look and making White jealous as hell. But why should Light Blue just be used as an accent color? Let her beauty shine for 3 games a year…nobody puts Baby (blue) in a corner.

Cons: Kind of looks like UNC, which I know leaves a bad taste in many Nova fans’ mouths. Also maybe Marquette already has light blue alternate jerseys? I dunno. What, did you want me to RESEARCH that?

Wildcard: The light blue would really bring out Arcidiacono’s eyes…opponents may easily get lost in them.

Will D. Cat’s logo is greatly under-utilized on the Villanova uniform, in that I can’t remember a single uniform that ever actually included his growling mug on there, let alone featured it. This dude’s been miming his Villanova support on the sidelines for years, and has yet to be recognized in a significant way on our jerseys. Fear not, Billy "The Big D" Cat, I got your back.

Pros: Busting out the alternate logo on the alternate jersey? That just makes sense. AM I THE ONLY ONE WHO CAN THINK AROUND HERE???

According to my extensive research, the kids these days are into drugs, "Dubby step" and neon-colored clothing. Why not capitalize on what’s popular? 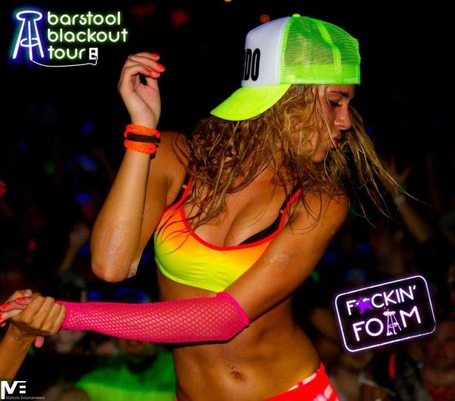 Cons: The brightness will probably start to fade after a few washes if we don’t use Tide Vivid for whites and brights.

Wildcard: If we replaced all the Pavilion lights with blacklights, then Villanova would have the distinct advantage of being the only team that could see its teammates. We might need one of those glow-in-the-dark basketballs and some LA Gears though.

Ok, so this one just felt good to make.

Pros: A great way to show the world that Villanova and the Big East are ready to move on and start dominating basketball in the new league.

Cons: Now that I’m looking at this more, it kind of makes us seem like the crazy girl who posts mean things about her ex on facebook after getting dumped.

Wildcard: We may get sued by the Association of Corporate Counsel, who thinks we’re talking about them.

Jay Wright is constantly praised for being the best-dressed coach in the NCAA. Why shouldn’t we strive to become the best-dressed TEAM? I’m thinking all of our players should take a page from Jay’s book and follow…suit. HEYO!

Pros: Can double as a job interview outfit for all of our players who will "go pro in something other than sports".

Cons: According to Esquire magazine, three-piece suits are on their way out in the fashion world. According to my racist uncle, reading Esquire is for "fellas from Blue States".

Wildcard: With such a well-dressed team, Jay Wright might just start wearing dirty sweatpants and an old beater.

A true throwback uniform, and definitely something that no other team in America would have. Guess what kind of shorts Nova was wearing in the 1985 championship? That’s right, short shorts. Coincidence? I think NOT. 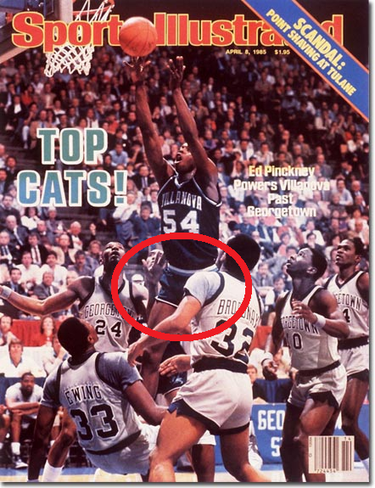 Pros: Greater leg mobility, plus it lets the players show off the quads they’ve worked so hard to develop.

Cons: Hipsters like short shorts. And Hipsters are the worst.

Wildcard: May inspire other 80’s-related things to become popular with the basketball team, like Cabbage Patch Dolls or cocaine.

What better way to distinguish ourselves from the twenty-something other schools that call themselves the Wildcats than DRESSING UP LIKE A GODDAMN WILDCAT???

Pros: PETA will get wicked pissed that we use animal fur for our uniforms. Look, I’m against animal cruelty, but I’m also against almost everything else that PETA stands for. LET ME EAT A BACON CHEESEBURGER IN PEACE

Cons: Fur will probably not be all that breathable, so the players may overheat. Also, I’m guessing it’s difficult to wash.

Wildcard: We may get a brand new fanbase of furries. If you don’t know what that is, you should totally look it up at work. *

Why overcomplicate this? If it works on the streets, then it MUST work in a professional setting too. That’s the same logic that motivated me to breakdance and freestyle rap instead of giving my projections report at my company’s quarterly meeting today (My boss immediately asked to see me in his office tomorrow – I’m assuming to congratulate me on a job well done!) 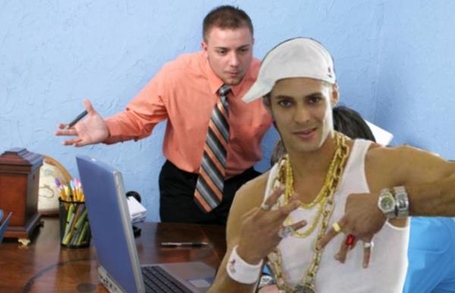 Pros: The other team won’t closely guard our players, because everyone hates the slimy feeling of another man’s sweat on you.

Cons: Some players may be self-conscious about the size of their nipples.

Wildcard: All street cred this move gains will be immediately lost if any of our players has a tramp stamp.