Ok, so I know it’s been a while since I wrote an article, but it’s DEFINTELY NOT because I was hospitalized for a time after accidentally getting an unnamed part of my body stuck in an empty Mike’s Hard Lemonade bottle.

The real reason I’ve waited on writing this is because I was hoping that Villanova’s Athletic Department would finally respond to the #AsktheAD feature they promoted on Twitter almost 2 months ago, in which Vince Nicastro would answer VU fans’ questions about the new Big East and Villanova’s athletic future. Like a few other fans, I had questions about Villanova’s plan to upgrade the Pavillion or build a new athletic facility for our basketball team: 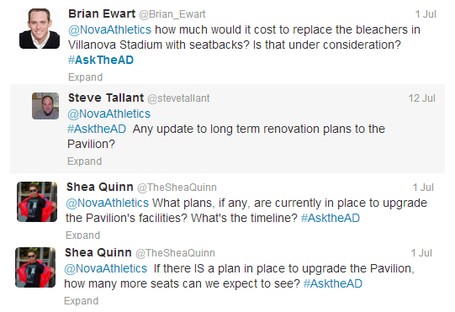 However, after a month and no response from Villanova, I kicked my investigative journalism skills into high gear and delved deeper with this ground-breaking tweet:

To which Villanova Athletics tweeted the next day:

…so yeah, they’re pretty intimidated by me.

However, I’m too impatient to wait any longer to hear what plans Vince and the rest of the Athletic admins have for the Pavillion. Instead, I’ve taken matters into my own hands and put together an all-star list of features for the future home court of the Wildcats.

Right now, the Pavillion’s student section strategy is pretty much "Pile about 500 kids on one end of the court up to the nosebleeds and then have them jump up and down for two hours on the rickety, 25-year-old bleachers". I know it sounds safe, but I still get the feeling that one day in the not-so-distant future those same bleachers may be making headlines: 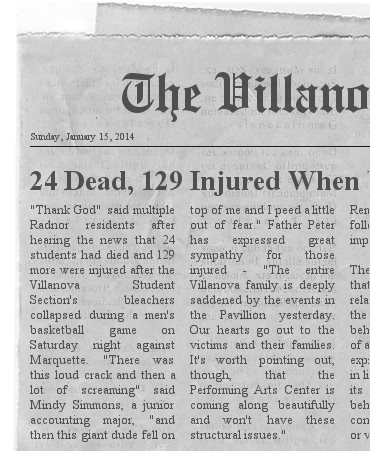 Beyond replacing the bleachers, I think redesigning the layout of the Student Section through a few small changes will drastically help our home field advantage:

1. Have the student section represented on both sides of the court – we do this at the Wells Fargo Center and it works great. It would work even better in a smaller, more intimate environment like the Pavilion. This way, we can intimidate our opponents on both ends of the court, and they won’t get easy free throws the first half of the game.

2. Also spread the student section along one side of the court so we’re essentially surrounding them on three sides. This would also put our students directly behind whichever tv announcers are calling the game so Nova Nation is represented every time they cut away during a timeout or whatever for commentary. That at least has got to be better option than this kid.

3. Include a alumni section for alumni who want to be standing and cheering the entire time like the students. As an alum who’s since attended games in the normal sections of the stadium, I can tell you that people generally don’t appreciate it when you stand up and cheer like you’re still in the student section the entire game. They say hurtful things like "Please sit down!", "I can’t see the game when you’re standing!" , or "Please be careful – you’re spilling beer on my son’s head!" 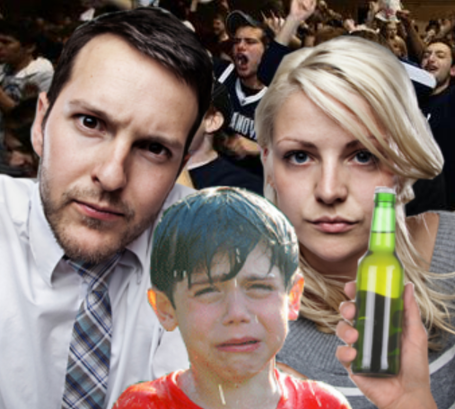 "If I give him one, will he stop crying?"

Just to spell it out for all those visual learners out there, I’ve created a new seating map: 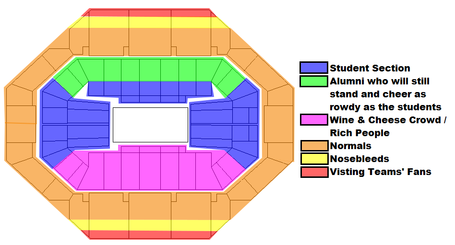 Obviously one of the biggest advantages of any home court is the hometown fans and the noise they make. At Villanova and pretty much every other college area in America, the biggest cheers, boos, applause, and chants come from the student section. What I’m suggesting is that the new stadium be built with some clever acoustic design that will funnel the noise from the already-loud student section and amplify it onto the court and the visiting team’s bench. Essentially, it would be just like the whispering arches of Corr Hall, but at one end is hundreds of screaming students and at the other end is a completely overwhelmed visiting team. And also there are no marriage proposals involved.

Now despite my Villanova Engineering background, I’m not 100% sure how to design a stadium with acoustic funneling architecture like I described. I started a rough draft of the blueprints below, but we’ll probably have to find a design engineer or architect to fill in the blanks. 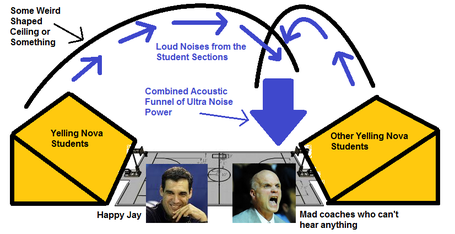 If Boise State can do it with their football field, why can’t we do it with our basketball court? 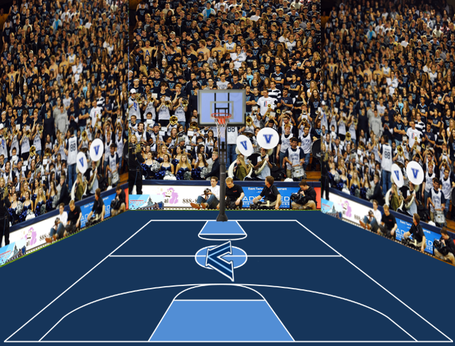 Apparently we could only afford one three-point line.

Picture this: you’re a 5-star high school basketball standout who’s being closely recruited by many huge basketball programs – at this point in your decision, it comes down to school visits. On your tour with Jay Wright of Nova’s facilities, the following conversation takes place:

Jay: "I understand that you’ve got a lot of great choices, but can any other school offer you…(opens door to new basketball stadium)…a smokin’ hot sexy blue basketball court like this one???"

Jay: "I know, bitch. Just take that sight in for a second."

Jay: "Jesus Christ, take a breath. And then picture yourself playing on that as your home court."

And that, ladies and gents, is how we beat out blue-blood programs for top recruits. With a blue court.

4. Entrance platform that raises out of the center of the court

…that the players rise up on while there are strobe lights and fog machines and any song from Jock Jams is playing. There is no better way to start a game than to make the other team not sure if they just stumbled into a scene from Space Jam. 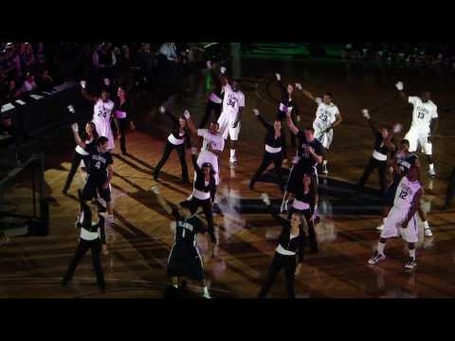 Basically just like this. Except no girls. And no dance moves. And with everyone wearing the same uniform. And on a platform that just came out of the center of the court.

How does the visiting team enter you ask? Don’t worry, I’ve got that covered. We’ll start a new tradition where they’ll enter through our hostile student section as our fans light nickels on fire and throw them at the players: 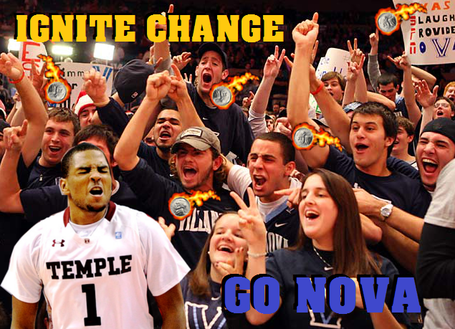 Was that pun worth the hour-and-a-half of photoshopping? Survey says "Not at all".

5. A mural in the entrance hall of St. Augustine and St. Thomas of Villanova riding giant Wildcats with swords of justice drawn 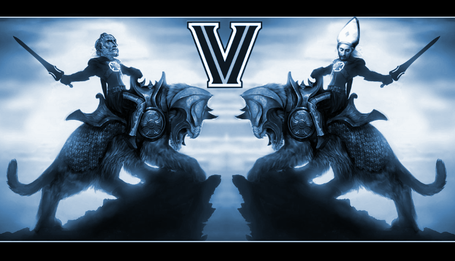 Welp, I’m fairly certain that you’re only allowed to photoshop a saint’s head onto He-Man’s body one time before you’re sent to Hell, so I’m gonna run to Confession really quick.