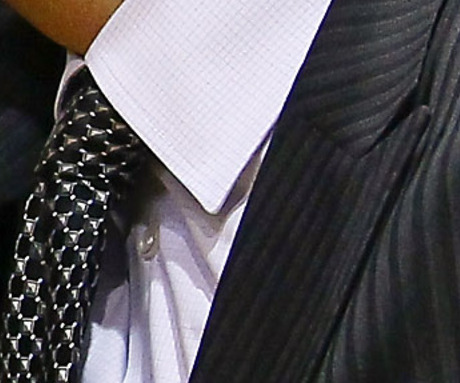 First, there was recognition that Jay, himself, knows of this Suit Watch column. Then, came the imitators at Anonymous Eagle. One thing remains the same; Villanova Head Coach Jay Wright knows how to dress.

Appearing as if he is ready to go out for New Year's Festivities directly following the Big East kickoff against Butler (which Villanova won), Coach Wright donned a three-buttoned, two-piece black suit with faint pinstripes.In a new twist to end 2013, he donned a white shirt with a faint hatch pattern.

He finished off the ensemble with a black patterned tie and a white pocket square.