Villanova looks to bounce back from their first loss in conference play, this time on the road vs. the struggling Golden Eagles

Many wondered how the Marquette Golden Eagles would succeed with the big losses of Junior Cadougan and Vander Blue, and this team has no doubt struggled out of the gate. Ranked number 17 in the preseason polls, Marquette now sits 5th in the Big East standings with a .500 conference record, their 3 wins coming against teams a combined 7-12 in the conference themselves.

Villanova leads the all-time series with Marquette 12-9. The Wildcats won the only meeting between these teams last year on February 23rd, which was Senior Day for Mouphtaou Yarou and Maurice Sutton.

To be fair to this Golden Eagles team, their preseason schedule was arguably the toughest out of anyone in the conference. Early matchups included a 10th ranked Ohio St. Buckeyes as well as an 8th ranked Wisconsin team on the road. Combine that with a (at the time) hot Arizona Sta. squad, and let's not forget a loss to the San Diego St. Aztecs who now sit 7th in the polls, and there's no room for rust to start the year. However, so many losses cannot all be forgiven, and it is clear now that this Marquette ship doesn't know where to steer, unlike what this SB Nation article had projected.

Senior forward Davante Gardner leads the scoring for Marquette with 14.2 PPG on 52.9% shooting, along with 5.8 rebounds. Alongside him on the front court is fellow senior forward Jamil Wilson, who comes in 2nd on the team at scoring with 11.6 PPG. No other player averages in the double digits.

Other than a strong senior front court, the Golden Eagles offense is troubling. They rank last in the Big East in 3-point shooting at 30.4%, compared to Villanova's 34.9% that puts them at 4th in the conference. They're also in the basement for PPG overall at 70.8, a full 10 PPG behind 2nd best Villanova. The back court is led by junior Derrick Wilson who contributes across the board with a 5.1/4.1/3.6 slash. However, they're missing freshman Duane Wilson as he decided to redshirt the season after receiving a stress fracture in his leg. On a positive note, the Golden Eagles have the 4th best assist/game mark in the Big East, good for 69th in the country.

A big story coming in was center Chris Otule's granted 6th year of eligibility after a knee and foot injury caused him to miss one full season each. He solidifies an already staggering front court. Even at only 18 minutes a game, he averages a little over a block game, and at 6-11 he'll be giving JayVaughn Pinkston and Daniel Ochefu some trouble in the paint. Wilson, Otule and Gardner are all 6-7 or taller.

Throughout the season I have many times argued that opposing teams should force the Wildcats to shoot a large number of threes, seeing as that's when the 'Cats have the most trouble (Syracuse, Lafayette). However, Marquette is a bigger proponent of this philosophy. With an arguably stronger front court and weak perimeter offense, this game may come down to whoever can hit the most shots out there. 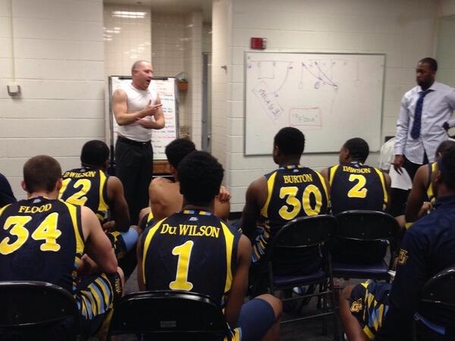 Williams started his coaching career early on by serving as a student assistant coach from 1992-1994 while studying Kinesiology at Oklahoma City University. He also was the same position at Navarro Junior College in Texas. 2 years earlier. He served as an assistant at the University of Texas-Arlington from `94-`98, as well as Texas A&M-Kingsville where he received his Master's degree. He assisted Mike McConathy from 1999-2000 before taking the same position at Colorado State from 2000-2004. His last assistant coaching position would be at Texas A&M until 2006 where he got his first head coaching job at New Orleans. He was there a year before finally landing at Marquette where he has been since the beginning of the 2008 season. With all the "buzzing" around the league, you can see where he got his nickname.

The most respected graduate of Marquette is arguably Robert. M. Mosher. Who is he? Only the inventor of Bagel Bites! Other big names include Emmy-winning CBS correspondent Ben Tracy and Patrick E. Haggerty, co-founder of Texas Instruments. Doc Rivers, current coach of the Los Angeles Clippers, graduated in 1985. Infamously, Senator Joseph McCarthy is a Golden Eagle alum, known for his "McCarthyism" scare during the Cold War.