(Sorry for the delay guys, didn't get as much film as I needed right after the game)

Share All sharing options for: Film Room: Player grades for Villanova vs. Marquette

First and foremost, we all know where I'm going with this: 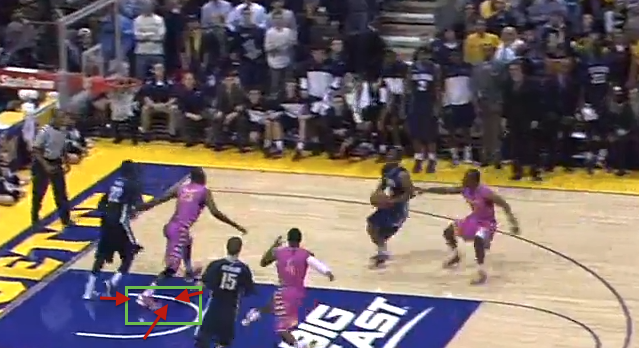 Just so we get this out of the way early, we all know after the replays that this was indeed a block. In my own opinion, the referee did what he got paid to do: blow his whistle when he sees a potential foul. Should this be reviewable? Absolutely. But did the referee do the wrong thing? No. Not in my mind at least, he did his job.
If he didn't blow his whistle, Marquette fans would have a valid argument because there was a large amount of contact. It was bang-bang, but it didn't decide a game. Villanova dug themselves into the spot pictured above. But that's beside the point, the Wildcats beat Marquette in overtime 94-85, to reclaim some form of glory after a beating by Ethan Wragge and Creighton on Monday.
So without further adieu, let's break down the Wildcats' performance.

Ryan Arcidiacono, guard, 39 minutes, 4-11 FG, 2-6 3PT, 10-13 FT, 4 rebounds, 11 assists, 20 points, 3 fouls, 0 steals, 0 blocks (Grade: 9.0/10 | A-)
Positives: Wow. Just wow. I probably have never been more impressed with Arch in his career until Saturday against Marquette. He put on a show offensively. A career-high in assists plus it's his 6th highest point total as a Wildcat and he had no turnovers while throwing double digit dimes, extremely impressive. And the reason to be impressed isn't because Arch got 11 assists, it was how he got them, which most were to James Bell.

Arch finally put the silly head fakes aside and used his first dribble a majority of the time to create space for himself and get to the paint and draw a double team which created high IQ looks for his teammates. That's smart basketball. And it led to a wide open shot from Bell on the right side of the arc. Can't draw it up any better.
Negatives: Defensively, Arch was getting bullied by Marquette from his usual spots, the high arc and off the dribble. He was frequently guarding Todd Mayo and Mayo had 18 points for the Golden Eagles, along with Derrick Wilson who had six points, seven assists and five rebounds. An example is below

Arch is close to thirty feet from the cup and he gets crossed here by Mayo and worked to around ten feet in before Mayo muscles him off the ball and gets an easy pull up jumper. The direction of the arrows is the route that Mayo went while he took Arch for a ride. The end result looked like this: 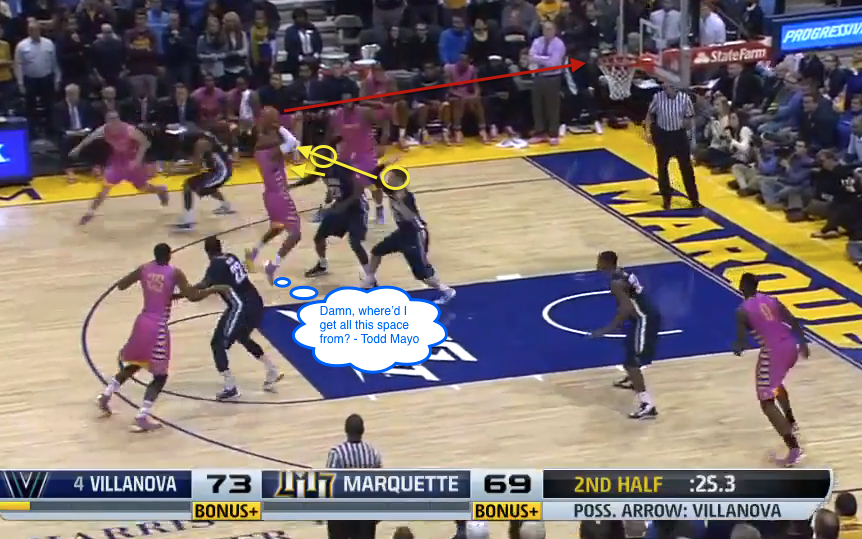 The worse part is that these defensive problems were happening late in the game. As great as Arch was offensively, he was again, pretty average defensively, which as you can see, was one of the reasons that Marquette was able to claw back into the game. Yeah free throws and a few other things are factors as well, but not being able to stop the ball-handler against a team full of attack-first players, is a major issue. That's why Arch didn't get a perfect grade and because he shot 36 percent from the field and 33 percent from deep. Half his points came from the line, which isn't a bad thing, but left him inefficient from the field.
Also he fouled Mayo with five seconds left, which allowed Marquette to tie the game.
JayVaughn Pinkston, forward, 36 minutes, 5-11 FG, 0-0 3PT, 2-4 FT, 8 rebounds, 12 points, 4 fouls, 1 assist, 0 turnovers, 0 blocks, 0 steals (Grade: 7.5/10 | C)
Positives: Not many positives from me for Pinkston. He did get it going in the second half, scoring a bulk of his points in the field in this time frame, but his struggles defensively were appauling to say the least. He did affect the game on the glass, his eight rebounds were a key difference to the battle of the boards which Villanova won 37-35, five of his eight came on the offensive end.
Negatives: Okay, this might have been the worse I've seen JVP perform defensively all season. Davante Garnder bullied him all game, Daniel Ochefu as well but that will be addressed later.
Here's an example of JVP vs. Chris Otule 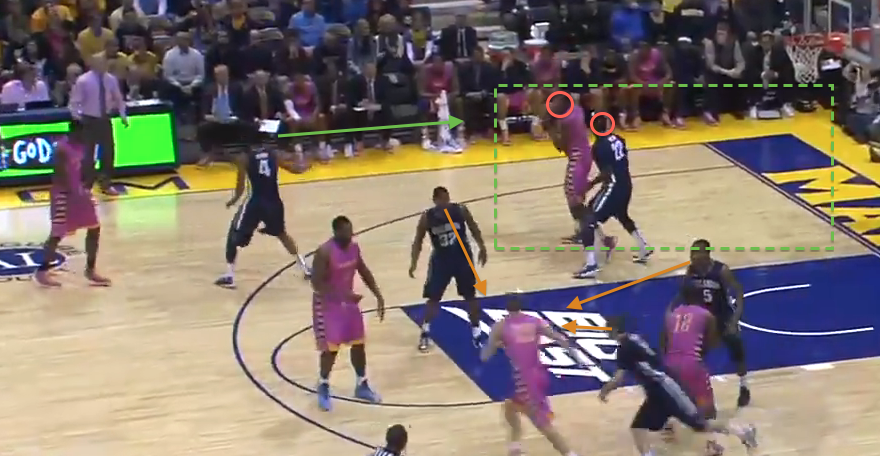 JVP gets matched up 1v1 with Otule on the left side of the screen. The only player paying attention to the mismatch is Darrun Hilliard. Everyone else is too concerned with a screen coming from the opposite side of the floor. Otule uses all of the space he has and uses a half spin on JVP and lays it up high off the glass. Otule is 6-foot-11, 275, Pinkston 6-foot-7, 260.
Another example vs. Gardner 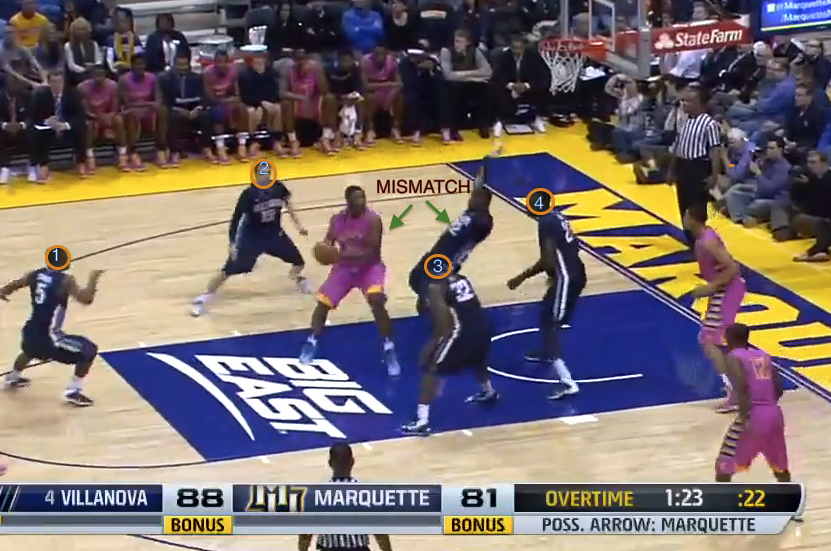 Gardner ends up knocking JVP to the ground here and scoring an easy bucket while nearly four teammates didn't even move to the position. Ochefu and Arch were the closet, before Gardner used his body on JVP, Arch missed a steal attempt and Ochefu sort of just stood there. Classic.
But the thing is that Gardner finished with 29 points and 13 rebounds, the front court is very much to blame. Pinkston couldn't find a good way to defend without fouling and the rotation didn't help the cause either.
James Bell, guard, 40 minutes, 9-18 FG, 4-10 3PT, 8-11 FT, 30 points, 4 rebounds, 3 assists, 3 fouls, 2 turnovers, 1 block (Grade 9.6/10 | A)
Positives: There are too many to count. In a game where the defense was pretty flat in the second half and the offense started pouring from Bell at all times. A career-high in points that he should have had weeks ago. He played the most out of any Wildcat and was very active defensively all afternoon. He had a very complete game, shooting 40 percent from deep and 50 percent from the floor. Nice day at the office.
Negatives: He missed three free thows, two which could have put the game away in the final minutes and could have avoided overtime. It doesn't take away from his score, but it stops him from grabbing a perfect score. You have to make the free ones. No excuses there. He makes 81 percent of them.
Darrun Hilliard, guard, 36 minutes, 8-13 FG, 4-8 3PT, 0-0 FT, 20 points, 5 rebounds, 1 assist, 1 turnover, 0 fouls, 0 blocks, 0 steals (Grade: 8.9/10 | B+)
Positives: Hilliard played a strong 36 minutes, but maybe it's just me, but his performance seemed very quiet. When I looked at the box score at the end of the game, I was really surprised he had 20 points, it felt more like 12. Anyway, Hilliard was again a consistent source of scoring for the Wildcats, after some games where he and Bell seemed to lose their mojo.
Negatives: Like many of his peers, he wasn't extremely active defensively. Hilliard is usually one of the team's best defenders and he seemed to get lost in the mix defensively or being bullied by some of the athletic wing players Marquette had that attacked the cup. Not a horrible performance in any way by Hilliard, just not a visually dominant one.
Daniel Ochefu, center, 26 minutes, 2-4 FG, 0-0 3PT, 1-2 FT, 9 rebounds, 5 points, 4 fouls, 1 turnover, 1 steal (Grade: 7.1/10 | C-)
Positives: His rebounding was the only positive Ochefu brought to the court in this one, that, and he was one of two starters who recorded any kind of defensive number in the box score. He had a steal and came close to a few blocks he got in rotation but were waived off because a player was fouled.
Negatives: There's a list of them. To begin, he was abused defensively just like Pinkston, against a team with a more dominant front court, something that should have been expected coming into the game.
This play was pretty bothersome. 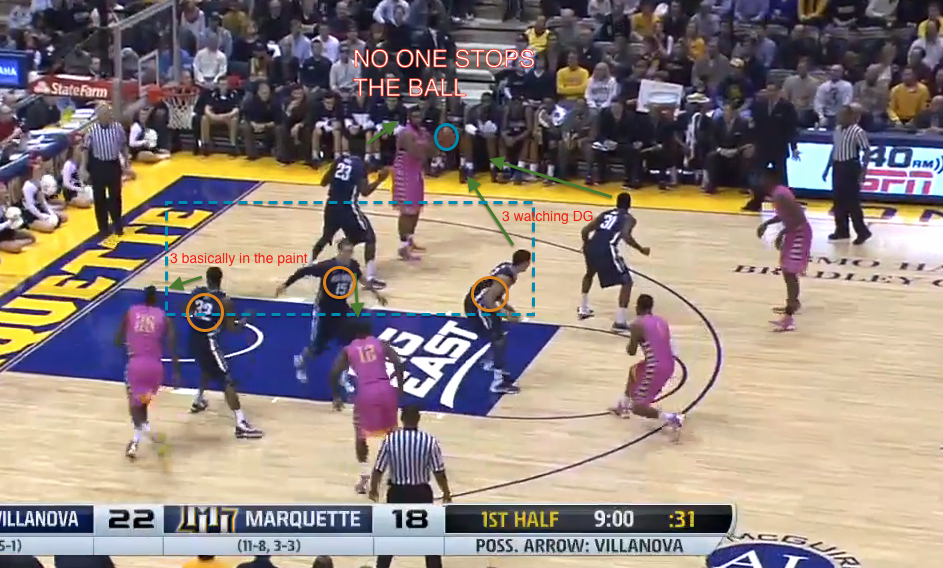 No one decided to stop the ball on this play, not even the main player guarding the ball: Ochefu. Ochefu used his body to try and absorb contact from Gardner but got bullied from around 17 feet to right under the net. Dylan Ennis, Josh Hart, Bell and Arch all just watched by the end of this play. Gardner got the bucket + an AND 1 opportunity. (Head shake).
Another play almost two minutes after the top one, Ochefu missed an offensive rebound and was out of position when Gardner received it. He followed his man to the basket and jumped into him as Gardner went up resulting in another bucket + AND 1 opportunity. Two bad fouls in two minutes.
These plays were why Chief got a C- today, his work on the glass was huge for second chance opportunities for Villanova, but outside of that, he was pretty ineffective on defense, a place where he should be the best.
Tony Chennault, guard, 18 minutes, 3-3 FG, 0-0 3PT, 1-2 FT, 4 fouls, 7 (really 9) points, 2 turnovers, (Grade: 8.0/10 | B-)
Positives: Chennault was aggressive with the ball in his hands, that's a fantastic development. Chennault has been working pretty diligently on his aggressiveness, mid-range jumper and offensive package all winter and it seems to be paying off. At this point in his career, of course he's not going to get much better. But in the time that he's been at Villanova this season, he has gotten better. That's a cause for excitement in my eyes, that, and he won the game before one ref took it away.
Negatives: Not even ten minutes into the game and it seems like Creighton's 21 threes still didn't teach the 'Nova guards anything. 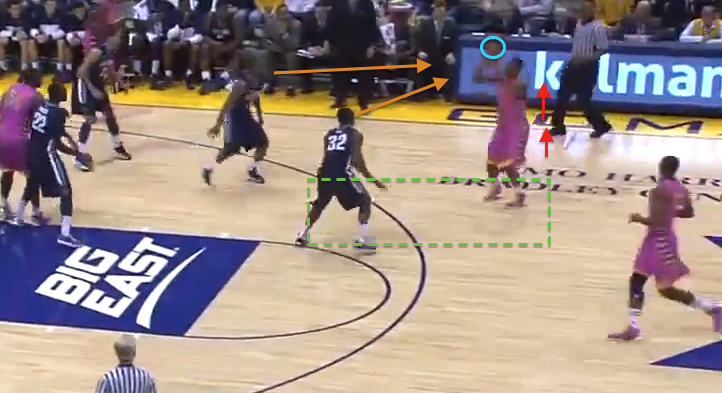 Too much space between the players and what I'll assume is NBA range. This should have been handled in practice but seems like laziness on the part of the Wildcat defenders to chase their foe off the perimeter, even Marquette guards who aren't great at shooting the outside shot. This happened after only one pass in the half court.
Chennault was also having a hard time (as usual) guarding the high-post from players off the dribble. Four fouls and two turnovers later, his perfect shooting became as tangible as his defensive struggles.
Kris Jenkins/Dylan Ennis, forward and guard 12 combined minutes, 0-2 FG, 0-2 3PT, zeros across the board, 1 steal, 3 fouls, 2 rebounds (Grade: 6.5/10 | D):
Positives: Jenkins had a steal. Ennis had a rebound
Negatives: Jenkins was another part of the front-court players that got abused by Otule/Gardner. In six minutes he picked up two fouls. Ennis never swung help defense when his bigs were being bullied in the post. Both played way too passively. Next topic.
Josh Hart, guard, 18 minutes, 0-2 FG, 0-2 3PT, 4 rebounds, 2 assists, 2 fouls (Grade: 6.9/10 | D+)
Positives: He got 4 rebounds and moved the ball around the arc.
Negatives: Hart had his worst game as a Wildcat against Marquette. He was taken off the dribble a few times by Derrick and Jamil Wilson, got caught in a few bad fouls and missed all of his shots. Chennault had a better game than Hart. You couldn't have told me that at any time this season and got a positive comment from me. He has to rebound from this one.