Share All sharing options for: Film Room: Georgetown vs. No. 9 Villanova Grades & Analysis

Another game, another Big East test that left the Wildcats looking a little questionable.

The No. 9 Wildcats escaped the Verizon Center on Monday beating Georgetown 65-60 in a game that Brian Ewart called "too close for comfort."

Let's jump right into it.

Positives: There's a reason I put TC first in today's film room and why he got a B+. 1) he was the only player on the bench who scored. 2) he was the only player (after reviewing the film) that could consistently take Markel Starks off the dribble. 3) In the month of January TC went 12-for-19 from the field and is shooting 63.1 percent, most of his shots being dribble drives ending in floaters or 15 foot jumpers. For a team that's watched Dylan Ennis struggle recently from the backup point position, this is impressive on TC's part.

Here's some good tape of one of his drives vs. Starks 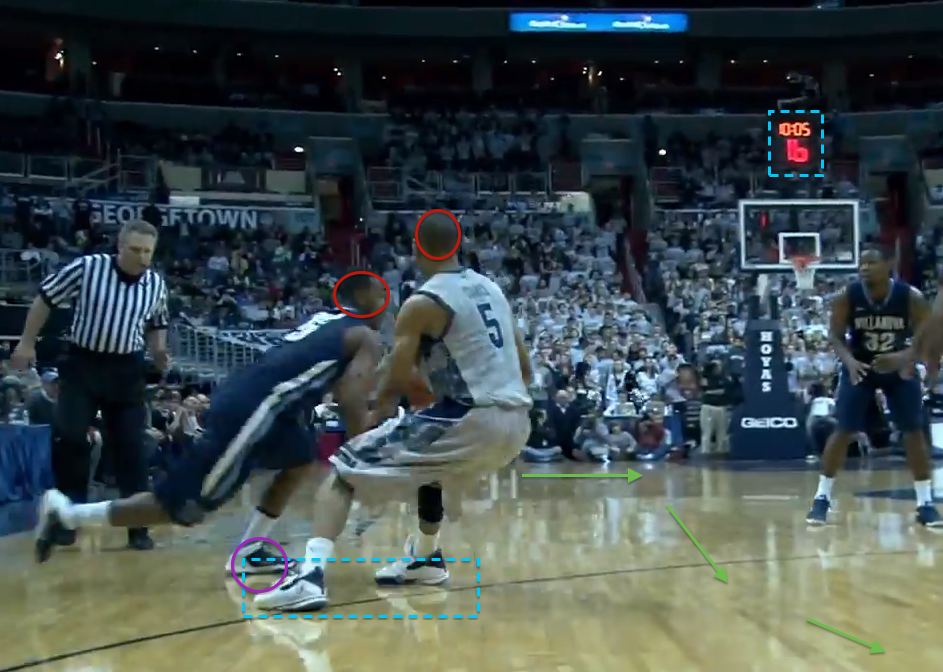 Starks is being taken off the dribble to the left and isn't moving his feet by the time Chennault is picking up a full head of steam. And he made his move at a good time in the shot clock, passed up the typical look to what might be a contested James Bell triple and carved his way to the lane for two.

His aggressiveness with his dribble has really helped Nova lately, specifically at Marquette and Monday night

Negatives: Two costly turnovers, no assists for TC, and the usual: the Nova guards getting carved up at the high post by either picks or the ball handling of the opposing guard. At this point in his career, it isn't much you can do.

Positives: JVP was aggressive everywhere against the Hoyas on Monday. He had a sequence where during Nova's 9-0 run he scored then turned the ball over, stole it back, got to the line for 2 and then stole the ball again and got back to the cup for FT's. It's that type of aggressiveness you like to see from one of the leaders in the locker room, always pushing the pace.

Negatives: You would think that a veteran forward like JVP, could take over a game like this with a weaker frontcourt in 30 minutes, but that never happened. In fact, outside of the glass, he was pretty quiet in the second half which lowered his grade. I assumed this would be the type of game where JVP scored closer to 20. His aggressiveness around the rim faded late in the game. Didn't really see him running like usual in transition either.

Positives: 20 days ago, we reported that Ochefu could have the team's highest NBA upside, this is another game where his NBA potential was visible. He was perfect from the field, the line and had two dimes. The big man was very impressive on the offensive end. He was one of three Wildcats in double figures.

This is how Ochefu's best play of the day began: 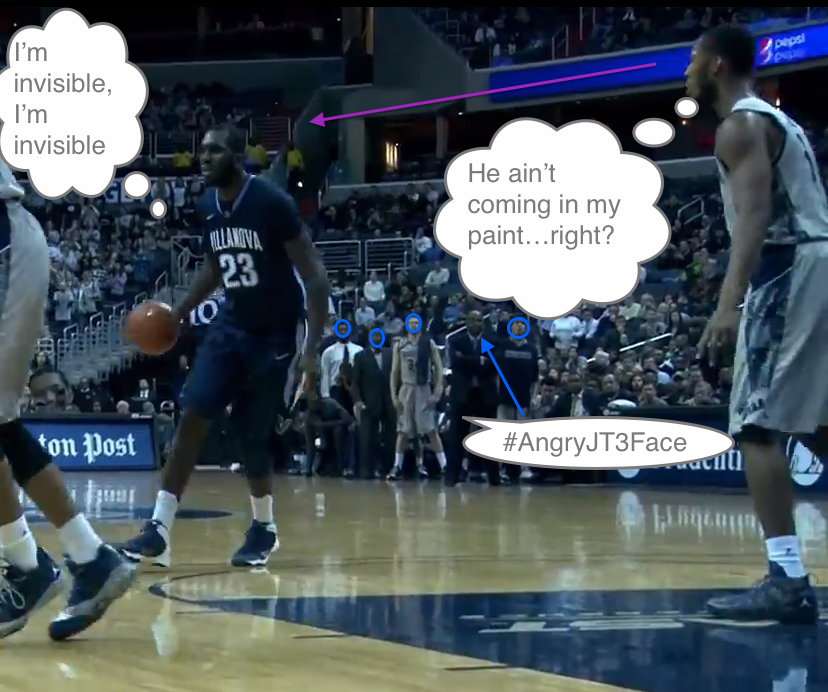 Ochefu dribbled the ball from the top of the key to the low post. That was actually a thing that happened. He then proceeded to do A SWEEPING HOOK SHOT OF THE GREATEST KIND. 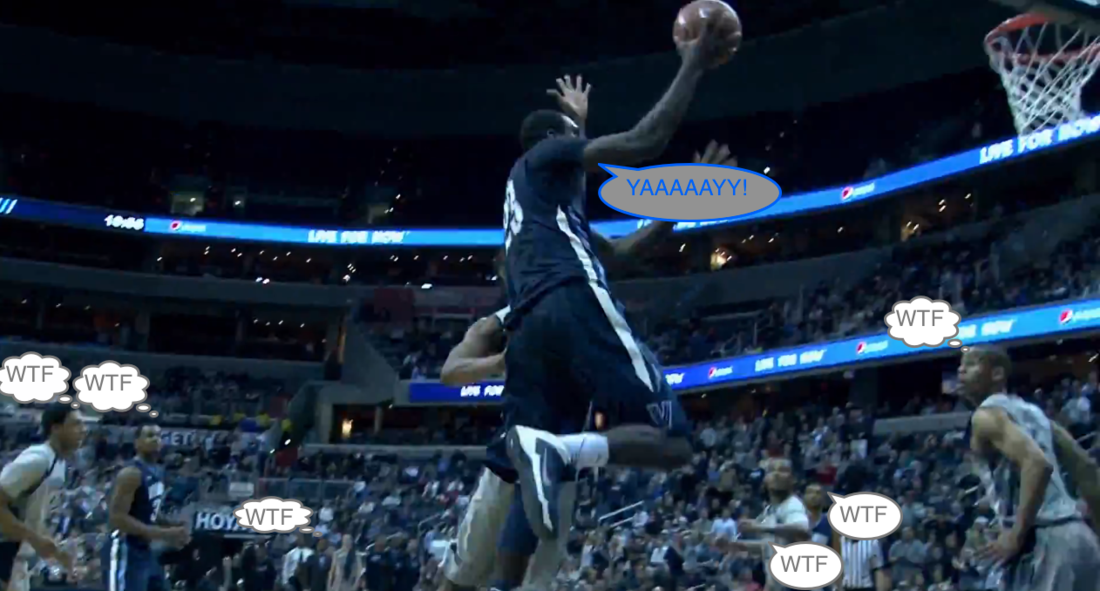 All jokes aside (maybe, not really, maybe, okay really), Ochefu seems to be coming to a nice place within his skillset right before the Big East tournament.

Negatives: Three turnovers, three fouls, three rebounds. That's a huge disappointment for a player like Ochefu. At this point in the season when he gets going offensively, you need him to have a bigger impact on the boards and turn the ball over less. The fouls are going to happen, there's no getting around that when your the only big man on the floor playing a team that primarily attacks the rim with quick guards. But three rebounds for a 6-11 center is never a positive.

Positives: The only positive I'm taking from this one is that Hilliard ran very well in transition and played strong defense. Other than that, it wasn't a great game by Hilliard. 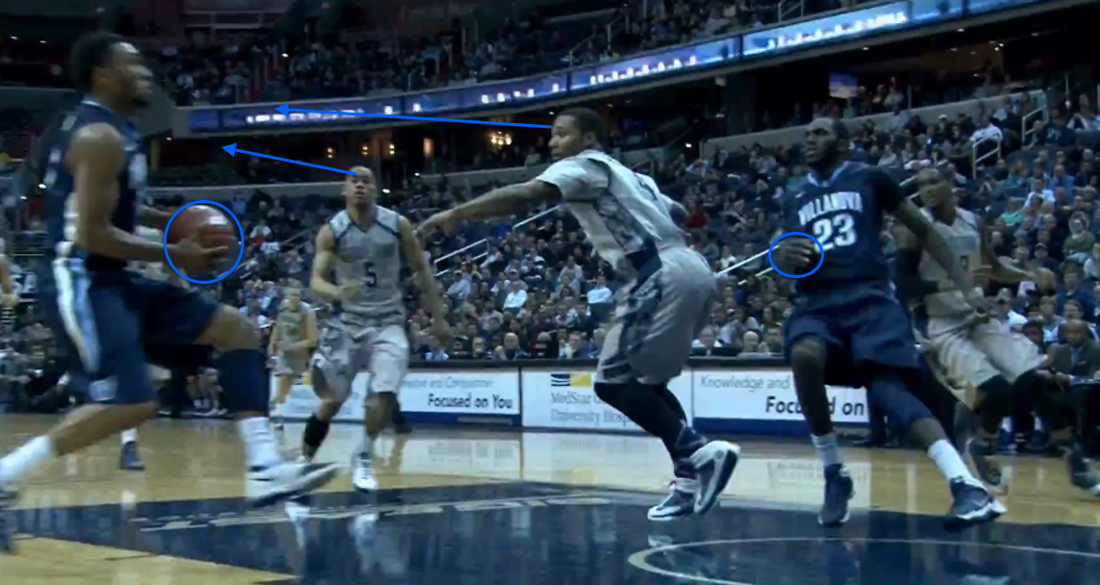 Ochefu led the break in the half court after the ball was tipped. He gave a quick handoff to Hilliard for the score in transition. Here's the thing, Hilliard gets all the credit here. Ochefu was running the floor basically against three people, but no one else was running except Hilliard. Without him, this could have been a blown play.

Negatives: In 34 minutes, tied for the longest any Wildcat played against the Hoyas, Hilliard was inefficient. His 33% from FG was a problem, but he did shoot 40% from 3 which sort of remedied the below average shooting. He didn't score in double figures and threw two turnovers. Just not the best game offensively for Hilliard.

Positives: Bells' defense was very good in this game. He was active basically everywhere and on every play and though his 4 fouls are a negative of this game, two of them came from just being in the right places defensively and getting a bad call.

Here's quick look at one of his triples: 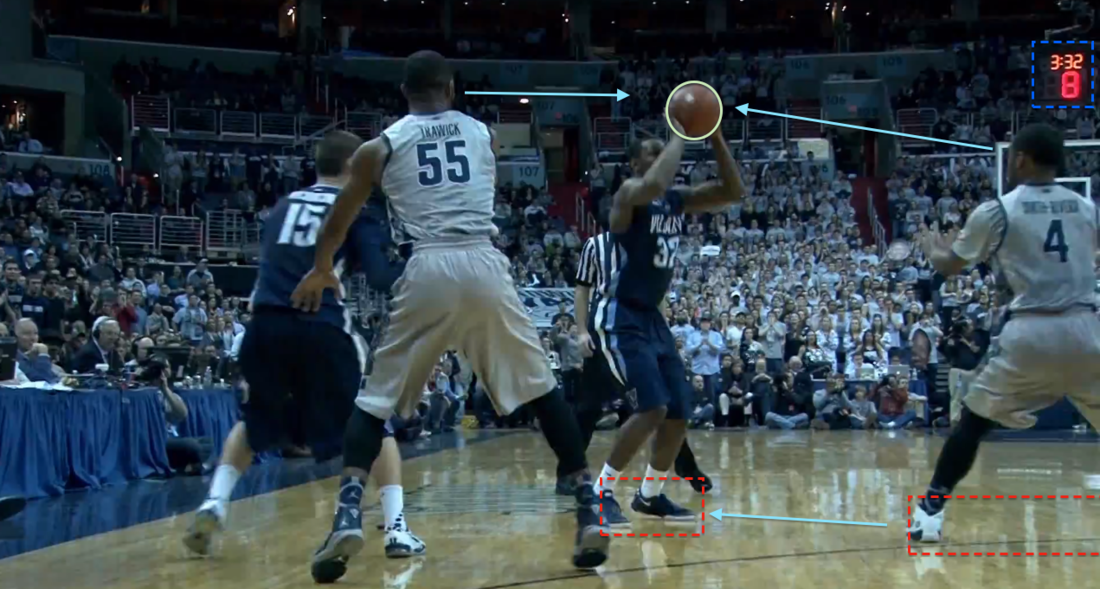 As usual, Bell gets his feet set almost instantly when catching the ball and the Hoya defender is almost five feet away from him when trying to defend the ball. Perfect catch and shoot motion for three. (Hint: Villanova can shoot NBA range jumpers too).

Negatives: He hit some big shots at the end of regulation and took a key charge at the end to seal the game. He was the difference maker for the Wildcats late, but that doesn't mean he had a great game.

Four fouls and four TO's? That's almost the same Bell we saw when he had the stretch of four out of six games where he fouled out and Jay Wright didn't have an answer for it. Bell also shot under forty percent from the floor and from deep, which doesn't help his cause.

This play also knocks him down a peg: 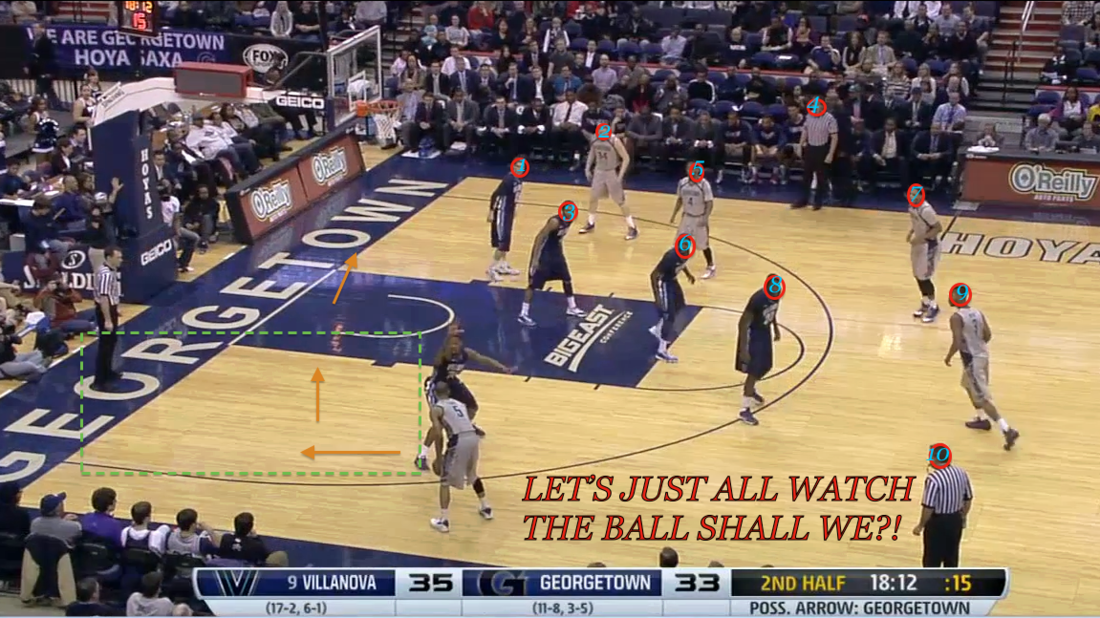 As good as Bell is guarding the ball, he got outclassed by Starks on this play: half being his fault, the other half his teammates. Starks got the ISO he wanted and hit Bell with two smooth crossover moves, during which no one decided to provide help defense when he was getting into the paint.

The same way this shot is set up is how all ten people marked on the floor stayed until, Hilliard tried to step over after Starks was already at the cup. 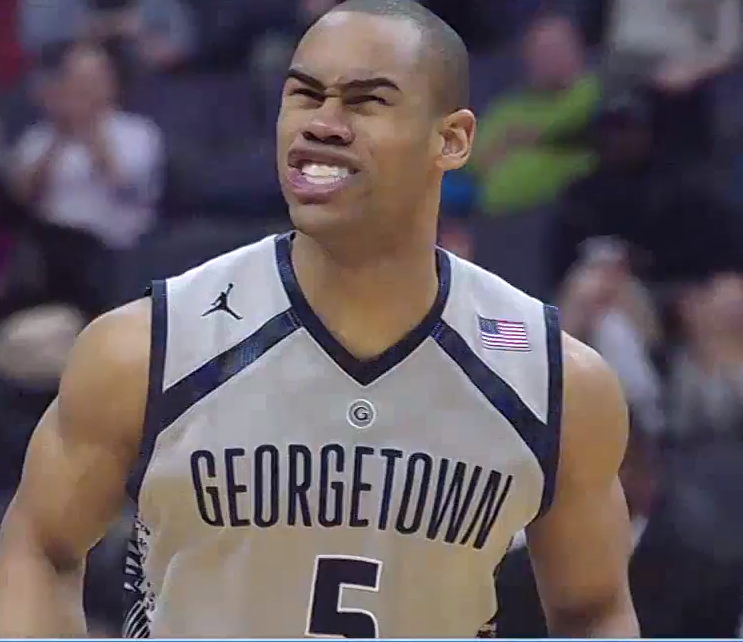 Positives: Arch impressed me on the glass against Georgetown, he had the second most boards out of all the starters, more than Ochefu, which might be the first time this happened all season. His back to back triples gave the Wildcats momentum in the first half, which was a good spurt after going down 8-0 to begin the game.

Negatives: Well, this season's Arch showed back up, a game after I thought he was about to take off. He took a typical-six threes during this game, which took up a majority of his offense and took one shot inside the arc and missed it. His ball distribution was back at it's regular number: 3 and he had two turnovers and played below average defense. These are more negatives in a game after his season's best at Marquette, so it's sort of baffling.

I assumed Arch would keep progressing forward in a positive way, but instead he allowed Starks to have a pretty solid game due in part to his poor D.

Positives: Out of the trio, Hart got three rebounds, that's the only positive thing here.

Negatives: It's become baffling how bad the bench has been playing in the month of January, excluding Tony Chennault, after such a hot start to the season. If they played with even half the tenacity that they exuded in the first ten games of the season, the Wildcats wouldn't be beating the Hoyas by a measly five points.