West coast hip hop artist ScHoolboy Q may have ruined the Hoops Mania surprise, but if he is performing it represents another great job by the Athletics Department to secure a big-time performer at the biggest event of the fall. 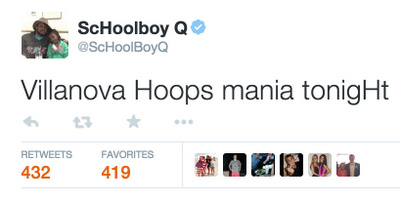 He was nominated for Best New Artist at the 2014 BET Awards and was also included as a featured artist on Macklemore's album, The Heist. He released his first album earlier this year, entitled Oxymoron, and it reached #1 on the charts. His famous singles include "Man of the Year" and "Collared Greens."

How does Daniel Ochefu feel?

In other news...our performer revealed himself