Gary Underwood, predictably, has been shifted off of the Wildcats depth chart this week.

The Villanova depth chart is now out for Saturday's trip to Richmond, and there are only two changes this week in the two-deep. Both changes are the result of last week's injury to running back Gary Underwood, who will be out for around four weeks.

Underwood was previously listed as the number-two running back and number-two kick-returner.

Replacing Underwood at running back will be Austin Medley, who was himself absent for a few weeks with an injury to both of his ankles. Medley returned against Morgan State to take hand-offs in relief of starter Kevin Monangai. Medley has been out of commission since the 'Cats meeting with James Madison on September 20th. Last weekend he recorded 11 carries for 30 yards (2.7 ypc).

At kick returner, safety Joe Sarnese will provide a back-up option for the 'Cats should they need it behind true freshman Matt Gudzak. Last week, Underwood returned two kicks for 37 yards, Gudzak returned one for 24 yards and Sarnese handled another for 26.

The full depth chart is below. 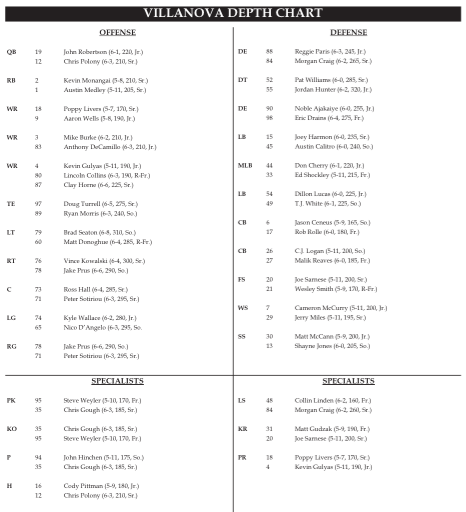